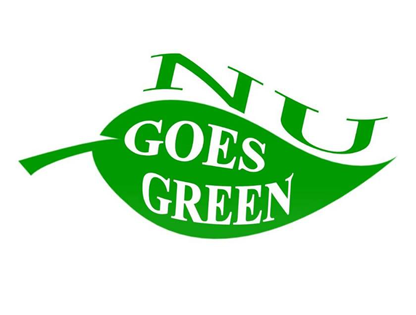 NU Goes Green is a small club on campus that is currently planning major changes for this semester.

The club is experiencing a change in leadership, as its leaders graduate soon and new officers take their place. The future plans for the club include incorporating ways to embrace the entire Niagara University campus in environmental practices, and to raise awareness on the issues the planet is facing.

The club members said they are excited for the plans that are underway. The goals for the current semester are in progress, starting with having at least one film night for the student body, featuring an environmentally focused documentary and discussion with Niagara University professors.

Work is also being done to exceed last year's Earth Day celebration. Earth Day is Saturday, April 22. This year, the club will host a table at the New York Power Authority's festival for Earth Day. In addition, a recycling project is being conducted.

Niagara University Goes Green will be under the direction of Maddy Ross as president, Aundrea Rogers as vice president, Carley McMullen as secretary, and Jamie Woodley as treasurer.

The environmental film idea was brought up by Rogers, who proposed an entire film series of environmental documentaries featuring discussion afterward by Niagara University professors. The club will be partnering with the political science department to provide one film event this semester.

Rogers said, "It's relevant to spread the word on environmental issues, and I feel it's important for people to be educated on these issues."

The movies that have the potential to be shown for the event have a wide range of topics, but all the titles have a practical element for students' everyday lives. A showing of "Before the Flood," featuring and partially produced by Leonardo DiCaprio, is scheduled for 5 p.m. Thursday, April 20, in the B. Thomas Golisano Center for Integrated Sciences, Room 101.

The major holiday for all environmentally minded individuals is, of course, Earth Day. NUGG is considering partnering with the Power Authority and possibly other clubs for this special day.

Woodley said, "I'm also treasurer for Explore NU, and it would be nice to collaborate with more clubs. Last spring, for Earth Day, I spent a couple hours in Gally. It was so fun!"

The club is hoping to surpass last year's celebration, as well as get student participation, club collaboration and promote awareness.

Former NUGG Co-president Rachael Ruszkowski said she is "looking forward to working with the children and teaching them about healthy food and environmental topics in general," at the Earth Day celebration.

The club has particular plans to incorporate children in the gathering, to instill in them environmental practices at a young age that they will want to teach their friends - practices that will stick with them as they grow up.

The club is initiating a recycling project, to test if dorm rooms would benefit from having individual recycling bins for each room. In addition, members are completing a survey and an in-field study to see if these bins are making a difference in the university's recycling habits.

Seniors Rachael Ruszkowski and her sister, Katelyn, the previous co-presidents, have decided for their final semester at NU to pass down leadership of the club a semester early, to "train" the new officers in how to successfully run a club.

Rachael Ruszkowski said, "I think we have a really great group. We are very supportive of each other and very committed, and passing down the club to the new officers will be great."

The club is unique as a result of the members' varying majors, grade levels and environmental experience. Some of the majors of the club members include nursing, history, business and environmental biology. This wide range of viewpoints gives the club academic diversity and leads to new ideas being discussed.

McMullen said, "I've been in the club since I was a freshman and this is my chance to be more active in the club."

Ross said she is most looking forward to drawing the whole school to participate.

The club members realize helping NU become a more environmentally conscious college can be a major selling point for many prospective students. NUGG has the potential to improve NU campus life, and the reputation of the university as a whole.