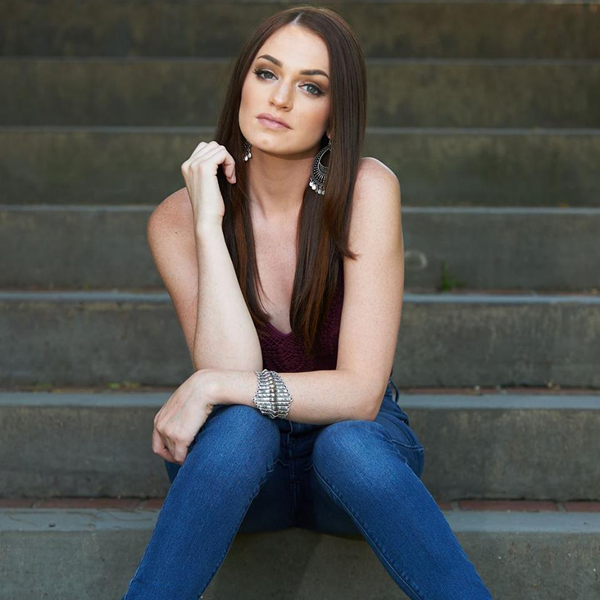 Thanks, in part, to a constant slew of reality television programs, the music industry is considerably overcrowded.

Even now, as NBC's "The Voice" showcases dozens of singers for millions of viewers, we know that very few contestants - if any - will remain viable music stars once the season ends.

Caitlin Caporale was one of "The Voice's" competitors in season eight, which aired in 2015. She famously performed a few bars of "Impossible" with Christina Aguilera - sitting in the coach's red chair, no less - before working with Pharrell and receiving guidance from Lionel Richie.

Recalling the moment today, Caitlin said, "All my life, I had been listening to her music growing up. I had sang her songs in talent shows at school. So, it's kind of like I've been preparing for that moment. And she asked me to sing it, and I was, like, 'OK. Here we go.' I used to sing along with her CD, and now it's actually her in front of me. And I knew that was a moment that I had to treasure, and I had to really give my all. So something just kicked in, and I was ready for it. And it came out awesome, and we were able to come in at different parts - and it all just worked."

Both Adam Levine and Blake Shelton told Caitlin she could win "The Voice," but she didn't. Like many of her peers, that could've been the last we saw or heard of the aspiring performer. But Caitlin pressed on, brilliantly began a Kickstarter campaign at the height of her TV fame, and put herself in a position to make, release and promote new music - all in the hope of doing something few artists from the Emmy-winning show have done: Succeed in the beyond-filled-to-capacity music industry.

Caitlin recently chatted with this writer about her time on TV, hew new single, "Guarded Heart," and the release of an EP titled, appropriately, "Canvas." 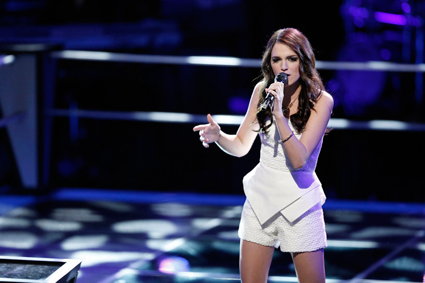 Caitlin Caporale on NBC's "The Voice," which airs Mondays and Tuesdays at 8 p.m. on WGRZ-TV Channel 2. (NBC photo by Tyler Golden)

Q: You did very well on the show. When you look back at that time, and that process, what do you think of it?

Caitlin Caporale: I can treasure that moment for the rest of my life. I mean, it gave me so much confidence in my abilities - not only as a singer, but just as a person in general, to be able to have a tough skin, and to work very hard, and to learn a lot in such a short amount of time. I definitely carry that on now, after "The Voice," in my own career, where I'm debuting my own music now. I learned a lot from the coaches, from just the whole process of that show, in general. I'm very, very grateful that I had that opportunity.

Q: Tell me about what your life is like when the show is over, because the perception is that the show is the star, and that sometimes the singers are left to fend for themselves after the season ends. Has the show given you any support since your season ended, or have you heard from Pharrell? What happens after the last episode?

Caitlin Caporale: Even though I'm not on the show anymore, we are a family, and I still stay in contact with members of the show. Pharrell - I spoke with him at the finale, and I let him know that I was working on my original music, and I asked if he would be interested in hearing it and giving me some feedback. And he was very up for it. So, I'm keeping in contact with him, and the show, and I'm really hoping that at some point I can go back and visit everybody, and hopefully premiere my music there.

But it doesn't end after the show. There's this perception that the show is the star, but I really think it depends on the artist and the person that was on the show.

As for me, I didn't let it stop me. I continued to stay in contact with my fans. I was able to get a lot of fans from the show, and have that platform.

I stay in contact every day. I'll be on Twitter. I'll tweet to them. I'll write them on Facebook or Instagram. I think it's very important to keep that relationship going, because the fans are the ones that will help my career move forward, and they're the ones who voted for me on the show. I think it's so important that I keep that connection going.

Q: In terms of the number of singers we see each year, not many have succeeded to the level of an "American Idol" or "America's Got Talent." What are you doing to put yourself in a position to succeed?

Caitlin Caporale: This has been a dream of mine forever - since before "The Voice." So, "The Voice" was a platform for me. And now that I have that opportunity, I don't want to take anything for granted. I have fought really hard every single day with my music, whether it be on social media, whether it be booking performances in my area, or writing original music. I'm constantly, constantly going, and trying to make it to that next level in music. And I try to stay as positive as I can. I have a family that's very supportive of me. I think that's really helpful to have that.

I just don't let anything get in my way, and I try not to get down on myself. You know, sometimes there's days where you feel a little defeated. But I continue to move forward. I just think it's important to have that positive mindframe to really go into it and not give up.

I just stay very, very busy with music. Music is my life.

Q: You have a new single. That's exciting. What can you tell me about your music today, and about "Guarded Heart"?

Caitlin Caporale: I'm very excited. After I was released from "The Voice," I decided that I wanted to launch a Kickstarter campaign. So, thankfully, I had all of those supporters from "The Voice" come along on this ride with me, for my Kickstarter. And we helped fund my debut EP, which is titled "Canvas" - which will be out some time in November.

But my first single will be out on Friday, Oct. 28, so I'm very excited. It will be on iTunes, Spotify, and pretty much anywhere you can find music.

"Guarded Heart" was actually one of the easier songs for me to write on this EP. A very talented piano player that I know, Daniel Abramson, he sent me a recording of a piano track that he had written. So, I listened to it, and I instantly had connected to it. So, I think it maybe took me an hour or less to just write the entire song from beginning to end. It was very natural. I love when something like that happens, and I don't have to force it.

"Guarded Heart," really, is just about being guarded, and finding love, and being cautious. And, thinking back on experiences that I have had, or I have seen happen through others, it just reminds me that I should really focus on myself at this point, until I'm ready for that next step, and just to be my authentic self. That's really what "Guarded Heart" is about.

People can relate to it. It's very emotional. It's a ballad, which I love to sing. I really hope that people will enjoy it.

Q: Is the rest of the EP going to be a similar tone and style?

It's the first body of original work that I've gotten to release, and it's just a combination of love, life - pretty much everything in between.

The music will be lots of soulfulness, with a pop edge, as well. We have some cool, stripped-down acoustic versions of songs on the EP. Then we have more songs that have a bit of production on them. You'll kind of get a taste of everything, from piano to guitar to drums - I kind of wanted to just give all that I can do on this project.

I really think that my fans - and new fans - will really enjoy this. It's very soulful, which is what I love to sing. So, I'm so excited for it to come out. 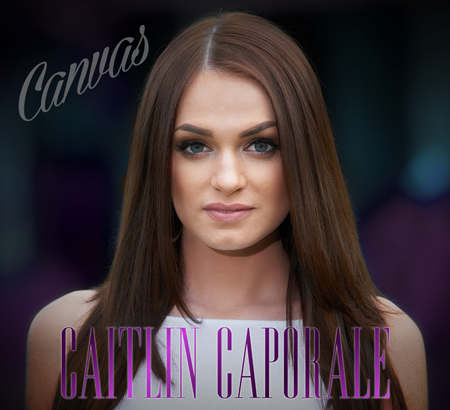