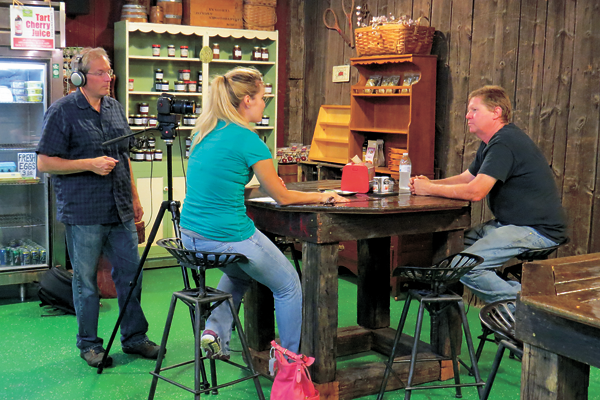 'Roam the Region' with the Niagara River Region Chamber of Commerce

On a crisp fall day, Christina Crane sits down at the famous Sanger Farms & Bakery on Lockport Road in Youngstown, sipping an apple cider slushy, and plotting the course of a new TV project.

Crane, the sales and marketing manager for the Niagara River Region Chamber of Commerce, studied broadcast journalism at Niagara University.

"My background is in television and radio, and I figured, 'What better way to help our members and to really promote the WNY area than to put together a television show?' " she said.

The program is called "Roam the Region." Airing on the Our Schools Channel (OSC-TV 21), the show's main focus is to feature chamber members and to bring awareness to the River Region.

When she took her position with the chamber in February, Crane started looking at ways to increase and sustain membership.

"I am always looking for a way to value things for other people. That's just always been in my nature to help others out," she said.

With many ideas in mind, Crane needed some help. That's when she turned to her former mentors, including Dr. Mark Barner, chairman of the Niagara University communication studies department.

"When Christina first approached me with the idea of creating a monthly 30 minute-plus program, I thought it may be a little overly ambitious. I don't think people realize how much time and effort go into organizing and producing such an effort," Barner said. "Having known Christina from the classes she took with me at Niagara, I knew she could handle it. Even as a student she was very organized and adept at planning projects and coordinating people to see them come to life."

Crane also partnered up with Niagara Falls High School students and the Our Schools Channel. 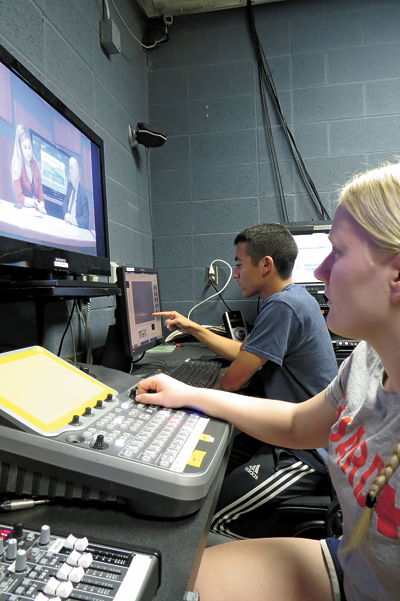 "I want to help benefit the students; help them get internship credit and really build on that," she said. "I know, when I was a student, it was important to have that experience."

"Roam the Region" provides students at Niagara Falls High School an opportunity to receive hands-on experience in the field. Whether they are running the teleprompter or shooting segments, they are getting a taste of what it is like to work in the communications world.

Barner's students helped shoot and edit some of the on-location segments for the first two shows.

"It's always valuable for students to move their study outside of the classroom. In this case, they pick up valuable marketing, public relations, writing and media production skills beyond what they would typically get in their coursework," he said.

Allie Hubert, a senior at Niagara Falls High School, said she's been having a blast helping out with "Roam the Region." It's part of her media productions class, taught by director Rich Meranto. Although Hubert plans to go to medical school in the fall, she said she still enjoys learning the "ins and outs" of producing a television show.

"It's nice, because you get to see where you could end up if that's a career path that you want to follow," Hubert said.

In the first week of September, "Roam the Region" premiered on OSC-TV 21. Since then, a second episode has aired. Crane plans to release a new show every month. Viewers can find a link to the episodes at www.niagarariverregion.com.

Each "Roam the Region" episode is produced with a theme in mind. The latest show features signature fall activities and area locations, including Sanger Farms and Bakery.

"It will help with advertising, which is always a plus," Sanger Farms owner Michael Tuck said of the show. "That's been our biggest stumbling block is getting the word out, and any little bit can help."

With two shows in the books, Crane said she is already looking forward to her next "Roam the Region" episode - and don't be surprised if it's holiday-themed.

Under the tutelage of department chairs Dr. Mark Barner and the late Dr. Brian Murphy, many passionate and determined CMS students have ascended the communications industry ladder - including "Roam the Region" host Christina Crane, Class of 2009.

Crane interned at WCBS-TV-2 in New York City and worked with Entercom Communications and Time Warner Cable News Buffalo before taking a job with Simon Construction Co., and then with the Niagara River Region Chamber of Commerce.

"I then decided to pack my bags and move away from home for the first time," she said. "Just minutes outside of the Big Apple, I served as the dugout reporter and in-game host for the Rockland Boulders baseball organization. After the season, I created a demo reel and found myself in the offices of WKBW-TV here in the Queen City." 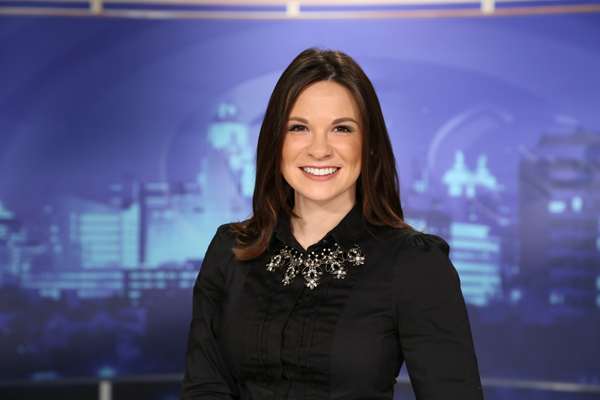 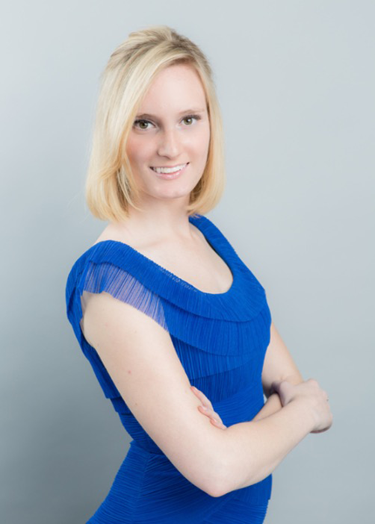 Stuck, Class of 2014, works as the Erie County government and courthouse beat reporter at WJET-TV in Erie, Pennsylvania. But it was her first internship with WCBS-TV-2 in New York City that truly launched her career and passion for broadcast.

"Dr. Mark Barner had connections with the general manager at the station, Peter Dunn, who was a Niagara University graduate," Stuck said. "He was able to help me secure a summer internship position."

Once Stuck returned home, she then interned with WKBW-TV in Buffalo.

"If it were not for my internships, I would not be where I am today," she said. "I made connections during those internships that helped me secure my first job and get my foot in the door in one of the most competitive industries."

King, Class of 2014, is weekend editor at the Post-Star in Glens Falls. Prior to that, he was a reporter for Manchester Newspapers - a family-owned community newspaper company that dates back to 1875.

Schiano, Class of 2013, works as an account executive for a public relations firm in Chicago. He is working with the Movember Foundation, along with local restaurants and national chains, too. Throughout his time on the Ridge, Schiano interned with Tops Friendly Markets and, soon after graduation, was hired as a public relations specialist.

Although he misses Western New York, Schiano said he loves his time in Chicago.

"It was time to travel and expand my horizons. It was a risky move, but I had to follow my gut instinct," he said.

Zaepfel, Class of 2012, is the editor of The Niagara-Wheatfield/North Tonawanda Tribune at Niagara Frontier Publications.

AT NU, Zaepfel held multiple positions, including editor-in-chief, with the school's student newspaper, The Niagara Index. She also interned in the web department at WCBS-TV-2 news in New York City.

After graduation, Zaepfel held an advising sales position for Sun Media Corp. in Canada and worked in marketing before taking on her editorial position.

"I worked in multiple communications fields and soon knew, in my heart, I wanted to return to journalism," she said. "It's always good to try new things, especially if you don't know what you want as a career. Every experience, be it good or bad, will help direct you in some way."

Bitetti, Class of 2012, is a New York City-based writer, editor and content creator with a niche in the interior design industry. Having written for a plethora of platforms ranging from magazine and newspaper to digital and social media content, Bitetti's work has been published by The Huffington Post, as well as various interior design blogs.

She absolutely adores alliteration and perfectly placed punctuation. You can always find her with either a book or an ice cream cone in hand. When she's not busy mentally correcting everyone's grammar on Facebook, she's sharing tips, tricks and tales on her blog, www.OliviaRoseKnows.com.

After taking a CMS 100 course, Simpson fell in love with the field. She founded the university's newscast, the "Ridge Report," and interned in the creative department of WCBS-TV-2 in New York City.

Some words of advice to current communication studies majors: "Don't rely on just your academics and classes and assume that will be enough to land you a job at graduation," Simpson said. "Find ways to take initiative, and pursue your own ideas and projects outside of class."

Simpson also interned at a public relations agency in Buffalo and helped out with production at Niagara. For now, she doesn't have any plans to stop producing.

"I think I still have room to grow and develop in my current position," she said. 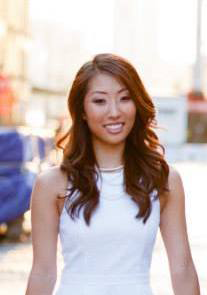 "Not many people understand what an assignment editor does, but I believe it is the most important position in the entire newsroom - it is the core of the newsroom," she said. "An assignment editor is the first to know the information before it is given out. We work closely with the executive producers, producers, newsgathering managers, writers, but, importantly, we try to help reporters and photographers make their job as easy as possible by gathering as much information as possible before sending them out on stories."

Prior to rejoining WCBS, where she previously served as an associate producer, Kim worked at the FOX News Channel as a national regional assignment editor.

"Apart from their beliefs and what many people may say about this specific network, it was truly a great experience to work on a national and international level for a major cable television network," Kim said.

"Being a journalist is no easy task, but it has been a very rewarding experience thus far," she noted. 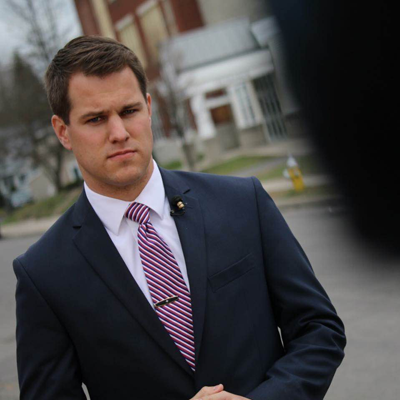 Redick, Class of 2011, works as a weekday reporter on Time Warner Cable News Albany. Throughout his time at Niagara, he worked for AM 1490 WBTA in Batavia.

"It was really valuable working for the station while being a full-time student," Redick said.

After graduation, he continued to work for WBTA and also picked up a part-time morning producing position with WHEC-TV Channel in Rochester.

"It's all about getting that foot in the door," Redick said.

After applying for one reporting job after another, Redick was hired as a multimedia journalist for Time Warner Cable News out of a bureau in Batavia. From there, he moved on to the Rochester station and now resides in Albany.

"I love the area, and have been able to cover some really great stories," Redick said.

Bailey, Class of 2003, is a general assignment reporter and weekend morning anchor at CBS 2 in Chicago. She joined the station in 2012, and was quickly promoted to her current position. She has also anchored the weekday morning show.

Prior to that, Bailey worked for more than five years at WRGZ-TV Channel 2 in Buffalo, where she was a popular news anchor and well-respected field reporter. Bailey launched "Daybreak Sunday" in 2008, and she was nominated for a New York State Regional Emmy in 2011.

Maloni, Class of 2001, is an award-winning journalist and managing editor at Niagara Frontier Publications. He earned a master's degree in magazine, newspaper and online journalism from the prestigious S.I. Newhouse School of Public Communication at Syracuse University. His articles on news, sports and entertainment have been featured in more than two-dozen publications in the U.S. and Canada.

Maloni is an adjunct professor in the Niagara University communication studies department. Corbetta, Stuck, Zaepfel and Bitetti each interned with him en route to their current positions.