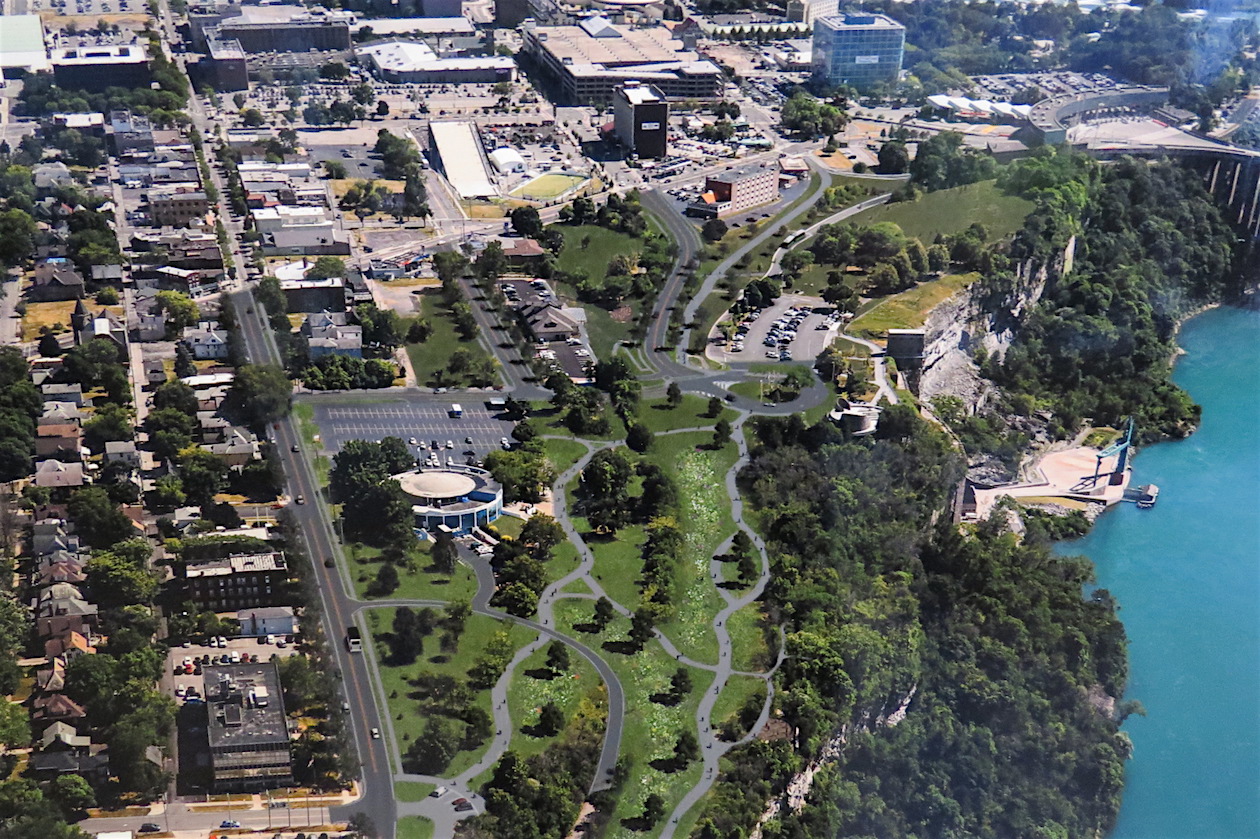 The community was given a final opportunity to weigh in on the Robert Moses Parkway removal project "build alternative" at a hearing Thursday night inside The Conference & Event Center Niagara Falls.

The parkway is proposed to be removed from the city's cultural district, which includes DiFranco Park, the Aquarium of Niagara, the Discovery Center and the Schoellkopf Power Plant Ruins, all the way to the corner of Whirlpool Street and Findlay Drive.

"The purpose of tonight's hearing is to provide an overview of the assessments conducted in the design report and environmental assessment, or DR/EA, and to receive your comments on the projected social, economic and environmental impacts of the project," said Paul Tronolone, senior project manager for the USA Niagara Development Corp., the group directing the parkway removal process. "This is the last public meeting before we actually make a decision on the project - before we get what's called 'design approval' to actually do the project. However, it's likely that we'll be conducting various neighborhood and community sessions during final design, and actually during construction, to talk about things like construction staging."

"This next stage is where we will wrap up all the extensive design work, and your input this evening will feed into that process," said Mark Thomas, New York State Office of Parks, Recreation and Historic Preservation western district director.

About a half-dozen people spoke, primarily urging the project partners to carefully consider what and how they build, and to properly utilize the world-famous natural resources.

The hearing focused on the DR/EA, which assesses components of the "build alternative," which specifically involves: the demolition/removal of all RMP expressway lanes/interchange/accessory facilities from Main Street in downtown Niagara Falls to Findlay Drive; reconstruction of Whirlpool Street from Findlay Drive to Cedar Avenue and Third Street from Cedar Avenue to Main Street; natural restoration of the landscape/habitat along the Niagara Gorge rim on lands reclaimed from the RMP removal; construction of a pedestrian/bicycle trail network along the Niagara Gorge rim (as part of the Niagara River Greenway Commission's shoreline trail system) linking to existing trails within the gorge and to adjoining city neighborhoods; and incorporation of associated streetscape amenities/betterments.

The DR/EA evaluates the various impacts of implementing the "build alternative" compared to the "no-build" alternative, which would involve leaving all current RMP facilities in place for the foreseeable future.

The removal would result in an approximately 140-acre unbroken green ribbon of open space along the Niagara Gorge rim between the three state parks, fully accessible to adjoining city neighborhoods. This will enable new recreational opportunities in the area, including scenic overlooks and trails that could be used for hiking, cycling and even cross-country skiing.

Tronolone said the "build alternative" would reconnect city neighborhoods to the Niagara Gorge rim, present no adverse effects to land use or demographics; improve community cohesion; not displace homes/residences; provide no disproportionate adverse effects to low-income or minority populations; not significantly affect schools or places of worship or other community facilities; and is consistent with the City of Niagara Falls' comprehensive plan and zoning.

Without the existing parkway road, motorists will be directed down Whirlpool Street, and from Main Street to Findlay Drive. It's at the corner of Whirlpool and Findlay that they can take the remaining parkway all the way to Youngstown.

Whirlpool Street will be fixed up, with enhanced road and sidewalk surfaces, as well as improved green spaces.

In terms of traffic, Thomas Donohue of Parsons (engineering and construction) said the average annual daily traffic volume (the amount of traffic going both directions on a given day) in 2010 was 3,740. That number is now closer to 2,000. Despite the current rate of decline, he projected the AADT in 2040 would be 4,300 (0.5 percent annual growth) under the "no-build" alternative.

With the "build alternative" in place, that Whirlpool Street AADT number jumps to 6,700. Though that number is considerably higher, Donohue explained, "It's basically half of what it used to be back ... in the early '90s. And it really equals the traffic that was there back in the late '90s.

"To give you perspective, if you think of Pine Avenue, going through Little Italy, Pine Avenue, currently today, has about twice the traffic of this 6,700 vehicles. They have about 12,000 vehicles a day today going down Pine Avenue. And even just eight years ago, it was three times this number - all on a two-lane road with parking on both sides and a lot of driveways. ...

"We really don't feel that there's going to be any issue with traffic on Whirlpool Street as we currently have it designed, and with this future traffic."

As far as project impacts, the DR/EA reported that, while there would be short-term construction impacts during implementation of the project (18 to 24 months), no major long-term social, economic or environmental impacts are anticipated.

Officials said they are hoping for a clean "design approval and finding of no significant impact," or FONSI, in December. The final design would then be coordinated next year, with a construction bid target date of January 2018. Construction could begin in the spring of 2018.

The $42 million project will be funded by the New York Power Authority, which owns about 71 percent of the land where the parkway will be removed. In 2014, NYPA provided money for preliminary engineering and environmental clearances for the project.

The "build alternative" is expected to result in $35 million in direct spending, while creating a combination of 430 direct, indirect and induced jobs during construction.

Per a 2006 memorandum of understanding, the five project partner agencies include State Parks (which owns the RMP), the New York State Department of Transportation (which maintains the RMP), as well as USA Niagara Development Corp., the City of Niagara Falls and NYPA.

In June, Gov. Andrew Cuomo announced the RMP was renamed the Niagara Scenic Parkway. In order to avoid confusion on this endeavor, which began in 2010, the title "Robert Moses Parkway removal project" was retained. 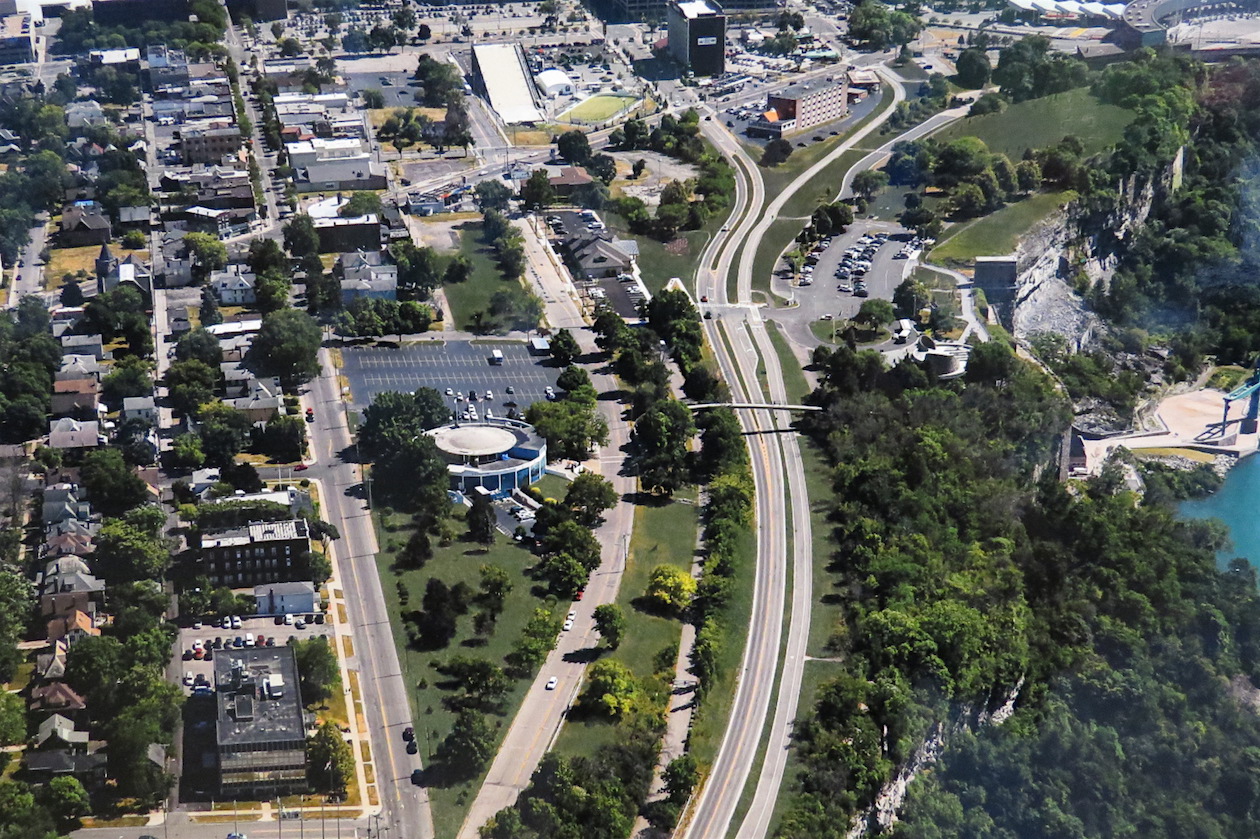 Shown are renderings of the Niagara Falls cultural district "before" and "after" associated with the Robert Moses Parkway removal project. The multi-lane parkway is removed in the image below. (Photos courtesy of New York State Office of Parks, Recreation and Historic Preservation)

Comments on the DR/EA will continue to be accepted until Sept. 9. They may be sent via email to [email protected](include "RMP Removal Project Public Comments" in the subject line), or via regular U.S. mail or hand-delivery to: Robert Moses Parkway Removal Project, c/o Parsons, 40 La Riviere Drive, Suite 350, Buffalo, NY 14202.

The report is online at http://nysparks.com/inside-our-agency/public-documents.aspx. Scroll down to "Robert Moses Parkway - North Segment."