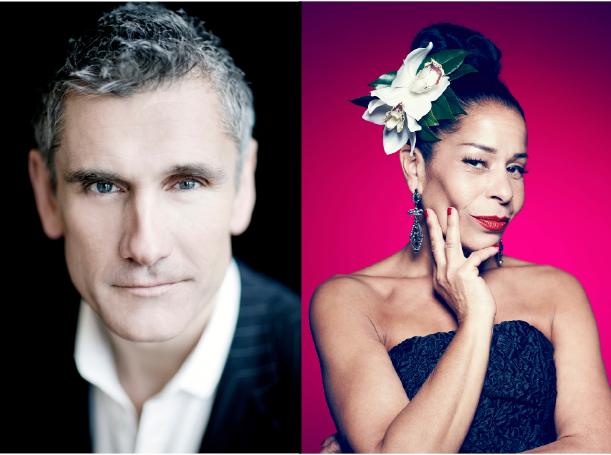 The 15th annual Historic Lewiston Jazz Festival will spread out across Center Street on Friday and Saturday, Aug. 26-27, with continuous performances on five stages, special activities, and an abundance of culinary delights from Niagara Region restaurants and wineries.

The region's most popular free music festival annually draws upward of 30,000 people from across the region - and the world. This year's celebration will kick off at 4:45 p.m. Friday with The French Quarter Hounds parading down Center Street. Festival times are 5-10 p.m. that night, and noon until 10 p.m. Saturday.

The headlining acts slated to take the main stage at this year's 15th anniversary festival will be Molly Johnson, the National Jazz Award winner for Best Female Vocalist, at 8 p.m. Friday, and multiplatinum-selling singer, saxophonist, producer and songwriter Curtis Stigers at 8 p.m. Saturday.

Known as one of Canada's premier voices, jazz vocalist Johnson is a mother, singer-songwriter, artist and philanthropist who has grown to become an icon in the jazz scene worldwide. Her interpretations of jazz and blues standards speak to an emotional depth few vocalists in any genre have reached.

Find her online at www.mollyjohnson.com.

Stigers started his music career in Boise, Idaho, as a teenager. His smooth blend of jazz, soul and soft rock allowed him to lend his voice to records with Al Green and Shawn Colvin, in studios with venerated producers such as Larry Klein, Danny Kortchmar and Glen Ballard, and on stage with a plethora of legends, including pop and rock greats Eric Clapton, Elton John, Bonnie Raitt, Rod Stewart and The Allman Brothers, and jazz giants Nancy Wilson, Al Jarreau, Gerry Mulligan, Randy and Michael Brecker, Chuck Mangione, Toots Thielmans, Wynton Marsalis and Diana Krall.

Industry impresario Clive Davis signed Stigers to a record deal after seeing him in a New York dive. A debut album sold more than 1.5 million copies worldwide on the strength of self-penned hit singles "I Wonder Why," "You're All That Matters to Me," and "Never Saw a Miracle." A year later, Stigers contributed a cover version of Nick Lowe's "(What's So Funny 'Bout) Peace Love and Understanding" to "The Bodyguard" soundtrack, which sold over 40 million copies worldwide. Stigers' 2003 release, "You Inspire Me," was The Sunday Times (U.K.) Jazz Album of the Year.

Stigers is online at www.curtisstigers.com.

VIP seated tickets, $20, are now available for each headline performance at www.lewistonjazz.com.

The festival stages will present local and regional jazz talents throughout the weekend. The second annual "Jazz Mass" program at St. Peter R.C. Church (620 Center St.) will begin at 4 p.m. Saturday. The popular Jazz Festival jewelry tent will be open both days on Center Street.

The Historic Lewiston Jazz Festival is a nonprofit event supported by community donations and corporate sponsors. It is presented by the Lewiston Jazz Festival Inc., in partnership with the Town of Lewiston, the Village of Lewiston, Sevenson Environmental Services and Artpark & Company. The "Rising Star Stage Sponsor" is M&T Bank, and the "Peace Garden Stage Sponsor" is the Niagara Falls Bridge Commission.

Voted one of the top 100 events in North America by the American Bus Association (2014), the Historic Lewiston Jazz Festival has received numerous awards, including a Best of WNY Award as the "Best (Suburban) Festival" (Buffalo Spree 2015). 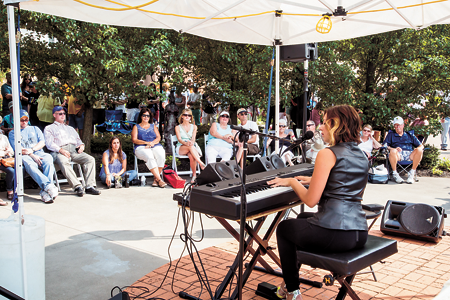 Top musical talents, like Christina Custode, who is shown playing at the 2015 Historic Lewiston Jazz Festival, will perform along Center Street in Lewiston next weekend. (Submitted photos)

Lewiston Peace Garden (Center Street, next to the Frontier House)

Lewiston Peace Garden (Center Street, next to the Frontier House) 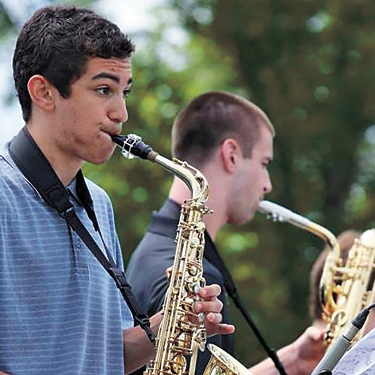