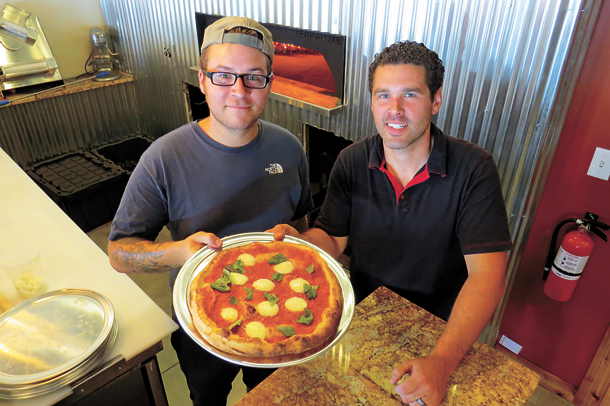 Gallo Coal Fire Kitchen is set to join the Village of Lewiston's Center Street restaurant row. On Wednesday, owner Michael Hibbard said, "We'll do friends and family for sure next week. We're going to just start bringing people in here tying to get the menu solid."

The general public can dine in "Probably within the next couple of weeks," he said.

Gallo is located at 800 Center St. It was formerly Dennis Brochey's Automotive. Last November, the Village of Lewiston Board gave property owner Russ Conrad permission to expand the structure's west and north sides to include a kitchen and larger bathrooms.

Hibbard said, "We started from scratch.

"When we moved in here it was just a shell, and then I had a vision for what I wanted it to look like. And I was able to execute it. I think that's what I'm good at."

The interior has the look and feel of an open-air bistro or brewery, and is accented by steel pieces and art. It looks nothing like an auto body shop.

"A lot of people that do come in here and see it, they're like, 'Wow; how did that happen?' I don't know; maybe it just comes naturally to me. I was able to envision something and was able to execute it," Hibbard said.

Of course, the star of the show, so to speak, is the coal-fire oven.

"That's the focal point," Hibbard said. "That's a coal-fired hearth. What that does is it cooks the pizza - pizza, wings, steaks, chops - at around 900 to 1,000 degrees. So, you could cook a pizza in anywhere from 2-3 minutes. A steak, chop, you'd want to push it all the way to the side, because, obviously, you don't want that cooking at that high of a temp.

Michael Hibbard is the grandson of the late Jim Hibbard - the legendary Hibbard's Original Frozen Custard proprietor. He's also the "M. Hibbard" behind the popular dessert brand of the same name.

"I moved down to South Florida. I opened up a concept like the one that's here - the actual scoop shop," Hibbard said. "We were making the product down there. It was successful in the beginning, and then that's when the whole frozen yogurt thing came about. And there was four within one square mile of myself. So, that really affected the business.

"So, what I did was I went out to grocery stores. Packaged the product. I started selling it South Beach area, Miami, Fort Lauderdale. And we got into a grocery store chain called The Fresh Market. They're based out of the Carolinas. They kind of really pushed me to get into bigger store chains, and then that's when I got into Whole Foods.

"With Whole Foods, they pretty much helped me to produce a liquid product and package it and sell it in their grocery stores" in the Southeast region.

Locally, "One place that sells about 16 flavors in tub format is Old Man River in North Tonawanda," Hibbard said. "That's the widest selection of flavors that I have that we sell to."

Hibbard sought to combine his talents with his hobbies - and when he saw a culinary opportunity in Lewiston, he took action.

"I've always been passionate about cooking," Hibbard said. "When I went to school, I went for industrial design. I was fascinated with that, but I knew that that's kind of not what I would want to do - sit at a computer desk and design little parts. So, that's when I actually went into welding. And I traveled doing art installations, steel work. That's a passion of mine, as well as cooking. I think they kind of go hand in hand. They relate to each other. You're creating something from nothing. So, I've always been fascinated in that restaurant realm, as well as art and construction. I think it's just that part of my brain works very well.

"My wife and I moved back to Lewiston, it's going on three years now, and we wanted to raise a family here. When we moved back, we saw that there was really nothing that fit this concept - nothing that we could go take our kids to and enjoy ourselves. Have a glass of wine or a beer and didn't have to worry about the kids yelling and screaming. That's kind of how we came up with this concept.

"My stepfather and my mother, they have a place in South Florida, and ... pretty much every restaurant's like that. I knew that it would be a great brand to really start in the Western New York area."

Gallo chef David Murphy, who worked at Elm Street Bakery in East Aurora and Carmelo's Coat of Arms in Lewiston, said coal-fire pizza has toasted and charred flavors unlike other pizzeria pies.

"I just think it's a better way to eat pizza," Murphy said.

"It's lighter, and it's more artisanal," he added. "You actually see someone making it in front of you. I just like that idea. ... It's just different for the area."

In addition to pizza, Hibbard said, "Lunch, we're going to do sandwiches, soups, salads. Salads will always be on the menu. We'll probably have anywhere from four to five different types of salads. More family-style. So, if you come in, there's two people, you can order one salad and share it between each other. Same thing with steaks. We'll probably have like a nice-sized steak where you can split it between two people."

Fresh ingredients will be the norm. On Wednesday, Hibbard and Murphy welcomed representatives from Orlando Food Sales Inc./Spriana, Infusion Sales Group/Affinity Group and Latina Food Service. The half-dozen men brought in an assortment of fresh doughs, cheeses and proteins - as well as tips on making the ideal coal-fire pizza.

Hibbard said Gallo would primarily serve Italian cuisine. And, though the restaurant has a large bar area, the food will be the focus.

"We don't want a late bar crowd in here," he said. "The family concept, you can just come in and grab a pizza; grab pasta; or we're going to do steaks and chops for specials, probably mostly on the weekends. It's just a good all-around place, and it's not crazy overpriced."

Hibbard explained, "We want to do seven days a week at the start." Hours will likely be from 11:30 a.m. until 10 or 11 p.m., with times changing according to the seasons.

Oh, and as for the name, "Gallo," Hibbard said it's an homage to the building's 18th century "Hustler's Tavern" days.

As the story goes, American troops brought tavern-keeper Catherine Hustler several roosters and hens following their raid on the British. As she prepared them for dinner, she plucked their feathers - keeping the tail quills as drink decorations. She allegedly used a feather to stir a beverage we now call "cocktail."

"Gallo is rooster in Italian," Hibbard said. "Why we did that was this site, Hustler's Tavern, everybody kind of knows. ... So that's why we pulled that into our marketing. Gallo, rooster, cocktail - they all kind of relate." 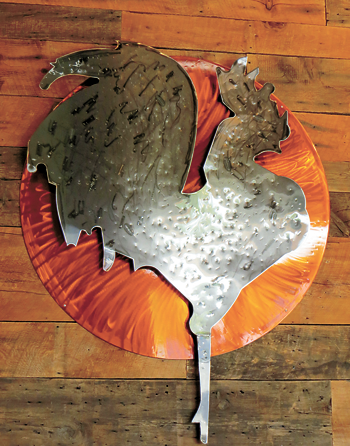