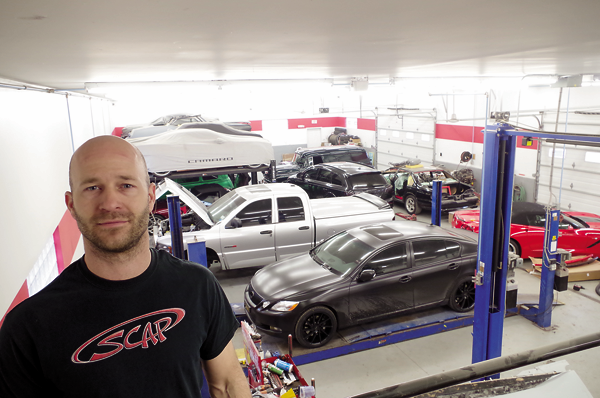 SCAP: Thanks for 20 years of support

What started out two decades ago on Love Road in Bud and Ella Abate's driveway has turned into the biggest garage on the Island.

Mark Abate is celebrating 20 years in business as SCAP, or Sound Choice Audio & Performance, which now calls the 12,000-square-foot building at 1939 Grand Island Blvd. its home.

Abate said he started off small, doing car audio work at his parents' house when he was 23 years old, calling his business The Sound Choice Audio.

"As I grew as a builder, I ended up offering more things. I wanted a cooler car, something to demonstrate what I can do more, so I had to do more accessories," Abate said. Then he went from accessories to performance, and from performance to body work. It wasn't long before The Sound Choice Audio didn't describe his business.

Broadening his work also meant moving from the driveway into a duplex, and then to a vacant place on Baseline Road that he rehabilitated to a professional standard, a point he called a key to his success. He was able to live there, work there, and earn rent to help pay his bills.

"I used to go to all the local car shows, all the local cruise nights, and then I started going to all the national shows," he said of his early days. He was winning first place in local auto competitions, and then started to travel farther, asking judges everywhere he went to judge him hard, wanting to use the criticisms he received to hone his craft. Soon, the second and third places nationally turned into firsts, and he earned a reputation for excellence that drew clients to his custom business.

He was established on Baseline Road for eight years before moving to his present location at 1939 Grand Island Blvd., the old Roscoe Printing building. The garage is second in size only to the town's Highway Department, Abate said.

He added one employee, then another and another until now he has five employees, and along the way his business has evolved from custom work into a broad range of services. Today, SCAP is more than just working on cool custom cars. Everyone needs to get their car serviced, Abate said, and finding there was a need on the Island for an all-purpose shop, he started to purchase the equipment to do things like alignments, brake services and oil changes in-house.

"We're a full-service shop," he said. "Custom is a huge part of our business, but it's such a small portion of the actual profit."

It's possible that somewhere on the Island is the next Mark Abate working in his driveway, wondering what it takes to succeed. Abate said: First, listen to what the customer wants and deliver their expectations.

Second, understand you're not perfect. Take criticism. "One of the things I used to tell customers, if there is anything you're not happy with, that you understand we can change, let me know."

"I would take any type of criticism not as they're putting me down, they're helping me build," Abate said.

Third, set what seem like unachievable goals. "And you just strive toward them."

Fourth, constant try to re-energize the business. Abate said he is always trying to improve the shop, and he continues to hone his craft just as he did 20 years ago. He said he just recently came back from a seminar on running a business with an eye toward making it more efficient.

He said he's spending the anniversary to "thank the Island residents and Island workers for helping support us," Abate said.