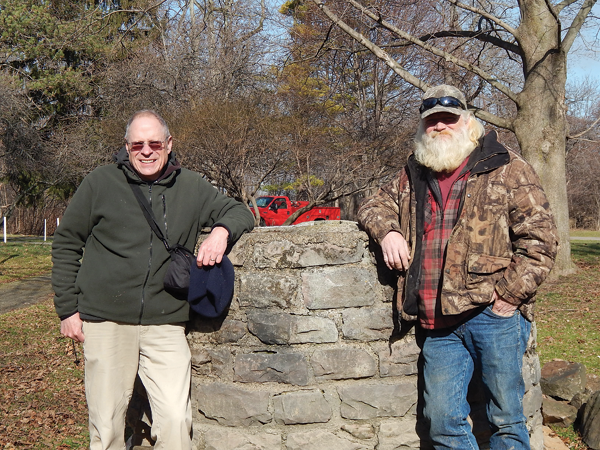 Old well is local symbol of mansions from Gilded Age

Special to the Island Dispatch

Feb. 2, 2016, was the culmination of a 17-year effort to recover an old well from the Niagara River that once enchanted the luxurious gardens around this historic home. LDC Construction reclaimed a valuable link to Grand Island's past.

Although the record is not entirely clear, the available evidence indicates that the well was probably constructed around 1910, making it more than a century old.

During the Gilded Age, the east side of Grand Island within today's footprint for Beaver Island Park was the location of many summer mansions. Historic River Lea formed the southern anchor of this "mansion row," followed by other luxurious homes like Marble Hall, which occupied the riverbank to the north.

At the end of the Gilded Age (the early 1900s), the owner of River Lea, James Tillinghast, and his next-door neighbor at Marble Hall, George Haywood, engaged in a friendly competition, with each trying to outdo the other in an attempt to fashion the most prestigious homes, gardens and surrounding landscape.

As the competition progressed, various attractive features were added. On the River Lea property, several fountains were built, along with a well that, in its heyday, resembled a classic storybook wishing well and no doubt complemented the famed gardens there.

Subsequent owners carried on the competitive tradition. The magnificent classical garden settings were not to last however, as the properties fell on hard times. During and after the Great Depression of the 1930s, little attention was paid to the maintenance of the landscape of both homes.

The well became a casualty of neglect and erosion. It was composed of Medina sandstone blocks mortared together with a special Portland cement-sand mix that was formulated on site. The Niagara River relentlessly chewed away at the protective marshland on the edge of the river, and eventually, the land on which the old well was situated was washed away. As the decades ensued, the roof of the well was lost and the well became an island onto itself in the Niagara River.

The foundation of the well had shifted, causing it to lean over at an angle. Yet despite the erosion and endless freeze/thaw cycles, the old well remained intact, losing only a few blocks from its base. Although the well was formidable (weighing in a about 6 tons), Mother Nature was slowly wearing it down.

With the recent restoration of the well, we're recovering a piece of history here that would have otherwise been lost to the forces of Mother Nature. And while it's not significant - as in George Washington peered into it, or Grover Cleveland sat on the side of the thing - it is nevertheless a piece of the magnificent mansion row that existed down there. All those old, elegant mansions have been destroyed, and the well is kind of like a small artifact of that kind of Gilded Age history that existed along that section of the shoreline.

The old well may very well serve as a local symbol marking the end of the Gilded Age and the transition into the Progressive Era. 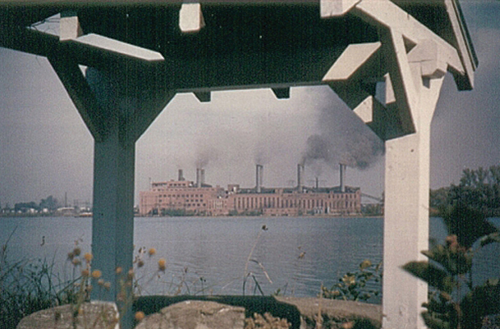 A glimpse of the River Lea well that was recovered earlier this year from the Niagara River at the edge of grounds of the historic mansion. In this photo, circa 1950, you can see the lower portion of the roof and part of the stone base of the well. The Huntley Plant in Tonawanda is seen across the river. (Photo from Grand Island Historical Society)