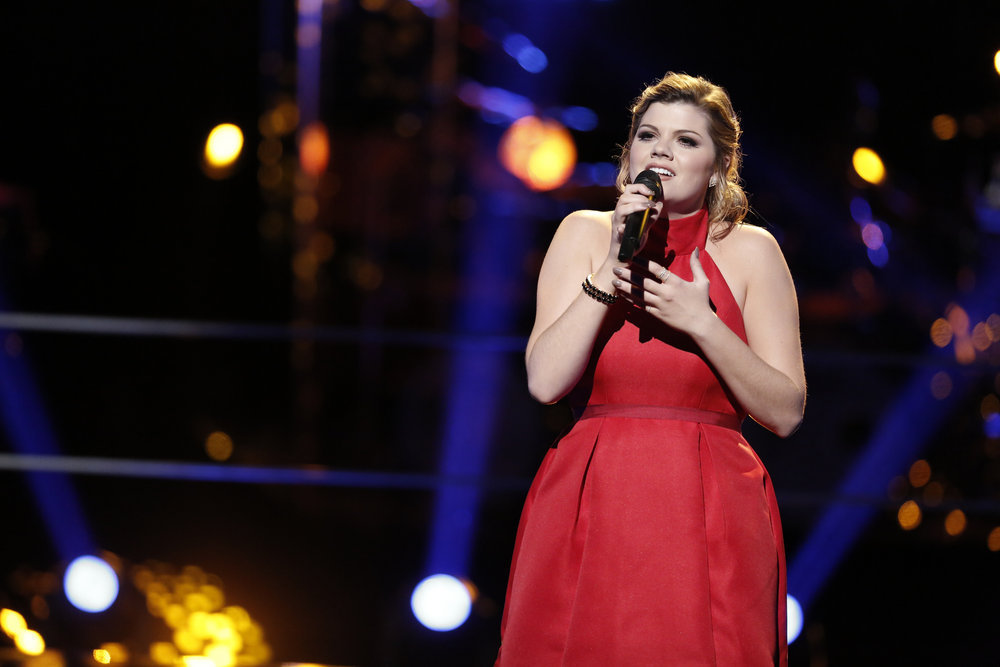 21-year-old Caity Peters, a self-described "black sheep of the family," is turning into a dark horse on season 10 of NBC's hit series "The Voice."

The California girl nabbed four chairs in her blind audition with a moving rendition of Labrinth's "Jealous." She then offered tear-jerking performances of Billy Joel's "Honesty" in the "Battle Rounds" and Sam Smith's "Leave Your Lover" in the "Knockout." During the latter two performances, Caity bested talented singers Joe Vivona and Abby Celso.

From the season premiere, the coaches have had high praise for Caity, a soulful R&B songstress.

"That was beautiful," Christina Aguilera said after Caity's blind audition. "I would love to hold your hand to the finish line, as another female supporter who also loves and appreciates soul music."

"Pick me as your coach!" she added.

Pharrell said, "I just feel like that intensity that you have, and that thing that brought you to tears and made us all turn around, that is what I want to stand behind. Because this is the kind of intensity that the show is about.

"I would love the opportunity to be in business with you."

Adam Levine said, "What you did was really different, and special. Heart-wrenchingly beautiful. And I think that your voice is 1 percent away from being completely, infallibly unique. I can help you find the last few percent.

"You're on the cusp of greatness, and that's why I pushed my button."

"I think you can win this thing," Blake added.

Following the "Battle Rounds," Adam said Caity has a "really distinct tone" to her voice, and "an original sound." He said she has something "truly special in there."

Blake, too, said Caity has a unique voice.

Pharrell said, "There was a moment where you, like, really dug in. It was like a fire-breathing dragon coming out."

After her "Knockout," Adam said, "Caity, the smoothness and uniqueness of your lower register is really cool. And then when you kind of stab for those higher things, it's equally beautiful. You have a lot of different colors to your voice, which I'm in to."

Blake said, "I agree with Adam that Caity has this cool lower register."

"Caity you gave those (emotional) dynamics. You gave a lot of them in your performance. You had so much emotion.

"My favorite here, for this one, was Caity."

"Caity, I felt like where you didn't move physically, you moved spiritually. And emoted a lot."

Afterward, he said, "I had to go with Caity, because I felt like Caity connected and gave people more of a emotional offering." 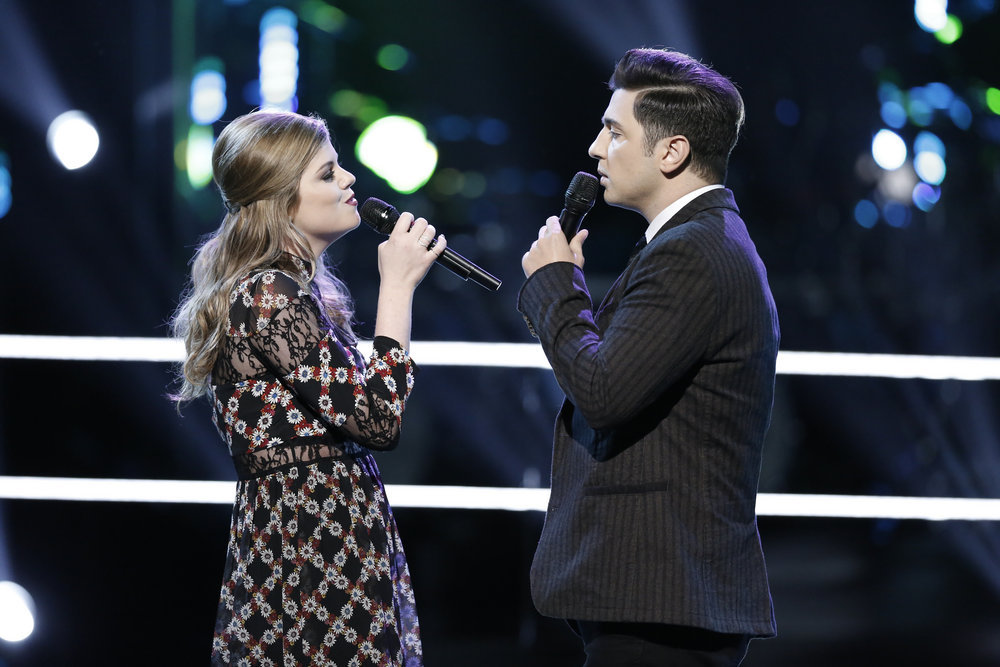 "The Voice": Caity Peters squares off with Joe Vivona in the "Battle Rounds." (NBC photo by Tyler Golden)

Caity spoke Tuesday with BTS, chronicling her journey to the live playoffs - where we're at now with "The Voice" - and looking to a career in music.

Caity: Yesss! I love it.

BTS: Tell me, how are you adjusting to this new world of being on TV and everything that comes with it?

Caity: Oh, it is definitely an adjustment. I am just soaking it all up, because I know that this show does not last forever. And the amount of love and support that I've received from my family and friends, and then the new people that I ... don't even know all over the country is just - it's overwhelming, but in a beautiful way. It's just very encouraging. And I'm just using it as more determination, more motivation to keep going.

BTS: As I said, I've enjoyed you from the beginning. You were a four-chair turn, but two were at the last second. Was that the most nerve-wracking performance? Has it gotten easier in subsequent rounds?

Caity: I actually think that the "Battle Rounds" are harder. I don't know why, but the blind audition ... I had peace that maybe I wouldn't get a chair turn, and then that was OK. Just to be able to perform on that stage was more than enough for me. So, when I got all four chair turns, it was, like, so overwhelming, and exciting.

But then, for the next round, I felt like I had something to live up to, because it was a four-chair turn. And I didn't want to disappoint them or let them down for pressing their buttons.

So, for me, personally, my "Battle Rounds," I was more nervous than my blind audition.

BTS: We're fortunate to speak with a lot of singers each season. When I'm watching the show, I'll circle some names and wait to see how well they do from round to round. A lot of times, these singers don't improve.

I've seen constant improvement with you. To what do you attribute that?

Caity: I remember, after my "Battle," Pharrell was like, "I really want you to work on your upper register." And that's the kind of thing that I never really used before this show. I'm very comfortable in my lower and in my mid, and I just kept it there. When Pharrell said that, I was like, "All right," because I didn't want to let him down. And so, I have been working a lot on my upper register. And I was able to show that on my "Knockout," and I was able to continue to show that.

It's just something that - I felt Pharrell's belief in me. And I didn't want to let him down. So, I pushed myself and he helped me to work on it. And, I mean, I've been able to see improvement in myself, which is amazing. And that's all that I could ask for, really.

Caity: Oh, man, there are so many things that I've learned from Pharrell. Well, first of all, him just as a person, his character is wonderful. And his honesty. And if something doesn't sound good, he's going to tell you it doesn't sound good. But then he's going to give you 10 different ways to work on it to make it better. He never just leaves you with questions, or if you don't know how to do something, he'll just spend time. I think that's the most amazing part of it. He will give as much time as you need to work on a certain area. And he'll give a criticism that is just so encouraging.

He's helped me to be more comfortable on stage - more comfortable with my voice. And I always kind of worry about, you know, "I don't have this big, powerhouse voice. How am I going to be on a TV show with all of these incredible powerhouse singers?" And Pharrell makes me feel like that I got here with just my voice alone. And not everybody can be this powerhouse singer, but that's what makes it unique, and that's what makes it different.

So, he's just helped me a lot, in so many different ways that I've seen vocally.

Caity: I think the performance aspect - I think I've grown a lot, because there was so many times before this show where I would get nervous showing my emotions on a song. Maybe like uncomfortable or just, I don't know, it's the most vulnerable thing ever to be on this stage in front of America. ... That's kind of on a different level.

For my blind audition, it was kind of like, if I did not give 100 percent, I may not continue. And I would always regret if I didn't give 100 percent. And so, me being able to show just my heart and my emotion - and I even cried at the end, just because four chairs was something I never expected. But, those four chairs are kind of a testament of, "OK, showing my emotion, and showing my heart in my performance, is OK - and is accepted - and is encouraged." ...

And I know Pharrell loves an emotional singer - and not even like a sad emotion, just any type of showing your heart for a song. And that's what I've been doing, and that's what I will try to do throughout this season.

BTS: Not everybody who goes on this show wants to win. Some are happy with the platform and the coaching. Obviously, there's only going to be one winner. Do you want to win and, if so, what will it take for you to win this season?

Caity: I mean, I definitely do want to win.

I think, so far, in my mind, it's like, "OK, I've already won." I never expected it to go this far, so, whatever happens, I'm happy with whatever results happen.

But, of course there's a part of me that wants to win. And I think that what I would have to do is just never go down from the bar I've set, and to push myself. And to perform bigger, and not just in my head; and not closing my eyes; to invite the audience in. To grow vocally more, and to be able to do things, maybe, that I haven't done before. And just to be pushed out of my comfort zone.

I think that America likes to see growth in people. And they like to see peoples' journey. I would just have to give everything when I sing - 110 percent on each performance.

BTS: As you said, this show is only going to last so long. At the same time, the end of the show is really the start of your career. When this is over, what kind of artist do you want to be, and what kind of a record would you want to make?

Caity: I would love to make an indie-soul record, where it's still that acoustic feel, but that soulful music. And, I mean, I'm hoping that, after this, possibly if I can picked up or signed - I mean, really anything that involves music is going to make me happy. And I know I've gotten cool offers from different places to play in Orange County and L.A. and Long Beach. That's been super encouraging. So, I'm excited to see what happens after, to start writing and, hopefully, get that soulful-type of album out there. 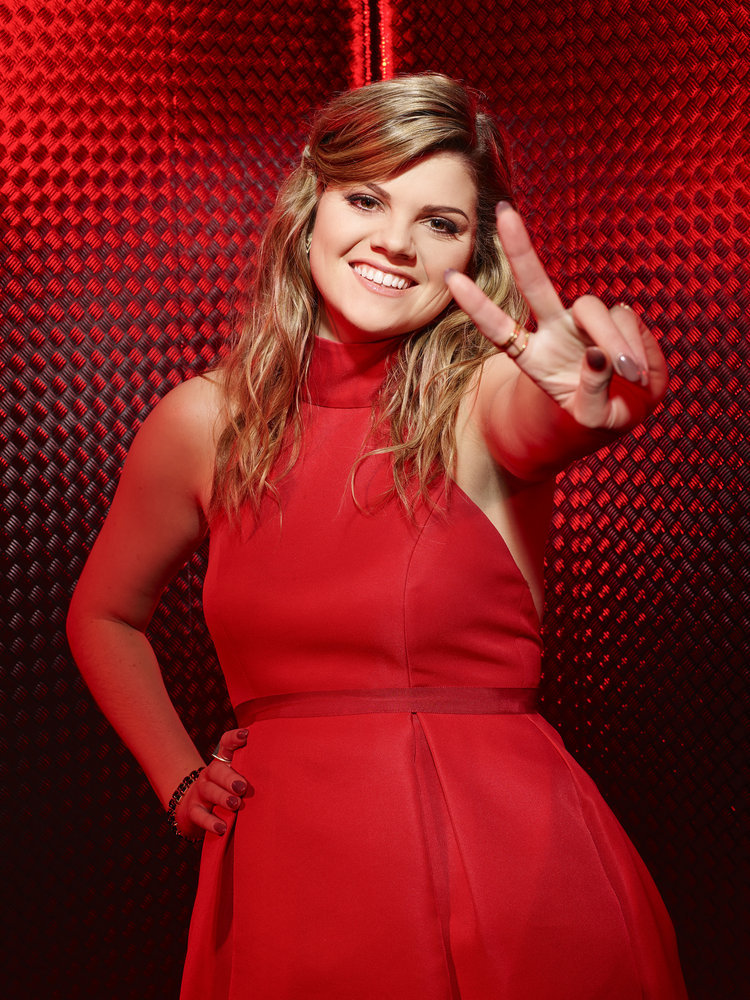