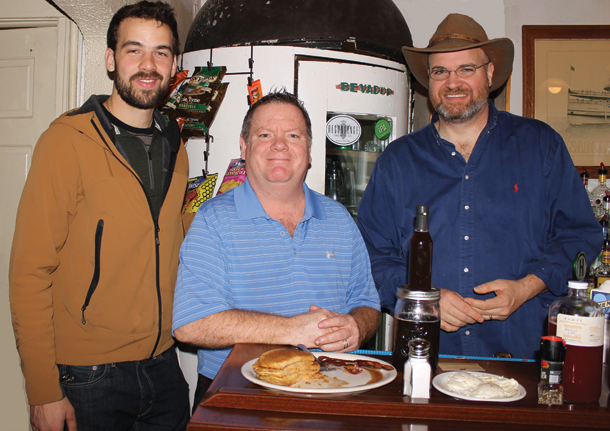 Grand Island maple producers celebrated their first successful batch of syrup with a pancake breakfast Sunday at the Village Inn restaurant on Ferry Road. Village Inn owner Mike Carr, center, hosted the breakfast and was one of those who had trees tapped for syrup. Eric Cornell, left, and Matt Green, right, started the community maple syrup project. Green and his wife, Sue Zinter, own Soma Cura Wellness Center, and Cornell is a massage therapist there.

Tapping the fruits of their labor: Producers savor maple flavor

A precious quantity of local syrup sweetened the pancakes, while the congratulations flowed freely at a special breakfast at the Village Inn restaurant Sunday.

A small group of Grand Islanders was celebrating their first successful batch of maple syrup - all tapped from local trees about three weeks ago.

The idea for the community project originated with Eric Cornell, a massage therapist at Soma Cura Wellness Center. He was joined in the effort by Soma Cura owners Matt Green, and his wife, Sue Zinter.

Last year, Cornell tapped a tree in his parents' backyard in the Town of Tonawanda. "It was a big silver maple," he said. "I got quite a few gallons of sap from one tree and boiled that down and had a couple of jars of syrup. I thought that was really cool that it was a tree in my backyard, and you can do more than climb it, you can actually tap it."

Cornell then tapped a few maple trees behind Matt and Sue Green's Grand Island home. "We had this idea that there's maple trees everywhere on Grand Island. So how about if we create this community project to tap maple trees in people's yards and then show them that it could be done, and then share the syrup," Cornell said.

Ross and Sally Kaiser are among those who joined in. "We had two tapped at our home and three at my Mom's house," Ross Kaiser said. "It was kind of fun, actually." He said they would check the trees periodically and talk to the project organizers when they came over to gauge the progress.

"It was neat," Kaiser said. "And we got a little syrup at the end." Would they do it again? "Definitely, yes!" Kaiser said.

Cornell and Green were continuing to tap trees for a few more days this past week, while the temperature was still dropping below freezing overnight and the sap continued to run.

"We got about 15 families to participate and we tapped 45 trees and approximately 85 taps, so average of two taps per tree. It's been a great time," Cornell said. "This has been our test run of the first year. Next year, we hope to do a lot more and get a lot more people on board."

Village Inn owner Mike Carr said restaurant chef Sarah Mallare read about the maple syrup project online. He decided to take part. When the syrup was ready, Cornell approached Carr about having a breakfast for project participants at the Village Inn.

Carr, Cornell and Green were among those cooking and serving up breakfast on Sunday. Mike Finney and Carr's teen-age son, Forrest, joined them. "This event is to celebrate this past year, but also to really get started to prepare for next year. To get friends and family on board," Cornell said.

Green handed out a small bottle of syrup for each family. "Because my wife and I have the yoga studio, we knew we'd probably have a lot of people who might be interested in it, so we said, 'All right, let's try to make this a community-type project and to just raise people's awareness about this bounty that's just sitting there, untapped, literally, in your backyard,' " Green said. "But this is just scratching the surface; there's so many things like this. My wife and I, with Eric's help, are in the process of converting our whole backyard into - they call it a 'food forest,' or a 'permaculture food forest.' " He said they'll have perennial plants that all yield food, including nuts, fruits and vegetables.

"A green lawn may be beautiful, but it's not really doing anything for you," he said. "It's probably the best thing for us to eat food, raw food that's coming from our yard."

Although this year's first tapping only yielded a couple of gallons of syrup to share, Green and Cornell have plans for the community project to grow and thrive. "We're going to take some of the syrup we have left, we're going to get a bottle that's in the shape of Grand Island, and when we're recruiting people to do it with us this year, we want to be able to show them and say, 'This is what we're going to give back to you. We really want it to be a bigger bottle of Grand Island, but we need your help.' "

While about two dozen people attended the event this year, Green said he would like to see as many as 200 people share a pancake breakfast with homemade syrup within three or four years.

Some of the bacon served was locally produced on James Heitman's farm on Staley Road. Heitman was there to enjoy the breakfast, too. He has raised livestock for about five years, including pigs, cattle, lamb and poultry. He envisions a resurgence in farming on the Island with the recent move to include Island lands in the Amherst Agricultural District.

Several people at the event talked about other agricultural programs that are growing in popularity, including the farm-to-table initiative and the Community Supported Agriculture movement. CSAs are a way for consumers to buy local food directly from a farmer by purchasing shares or becoming members. They receive a box of seasonal local produce each week throughout the growing season.

Donna Kester-Phillips told attendees about the Beaver Island State Park Memorial Tree Planting Project that she started with the goal of restocking trees lost at the park due to disease and recent harsh winters. People can make a contribution to honor a friend or family member or commemorate a special event. To learn more, call the park at 716-773-3271 or contact Kester-Phillips at [email protected].

Learn more about permaculture at www.facebook.com/WNY-Permaculture.