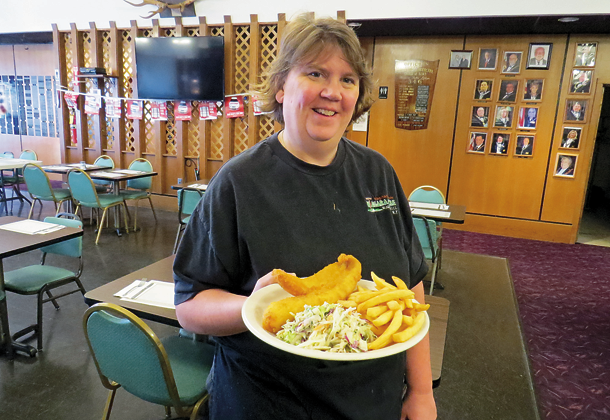 Linda Brown is shown with her winning fish fry.

"It makes me feel that my hard work is finally starting to pay off," Brown said upon receiving the news Friday.

"I was a caterer here for eight years, and then I left for five years, thinking I needed a desk job - a sit-down job," she said. "And the Elks had gone through about four caterers during the time I left. So, at the time, I knew I was going to get laid off from the job that I was in. I approached them about me coming back. I've been back for a year now. And it's just now to the point where there's a line out the door."

It's not hard to understand why people are willing to wait for Brown's fare. In response to the question, "This fish fry is best because," reader answers included:

Brown said the key to a good fish fry "is the fish that you use."

"I use cod, not haddock," she noted. "A lot of people don't realize that. A lot of restaurants serve haddock. And that's one thing that sets us apart. No. 2, it's fresh - it's never frozen. No. 3, it gets delivered to me fresh every Thursday night (from Montondo's in Lockport), so it's not something that sits around for days."

And, as she pointed out emphatically, "It's not a fish fry. We have battered fish, and we have panko-breaded. But we also have six kinds of baked fish. We have a Mexican, an Italian, a Greek, lemon pepper, Cajun, plain baked.

"Ninety percent of the people get the battered fish. There is no beer in it, so it's not beer-battered fish. It's just batter - that's all it is."

"Everything's cooked fresh to order," Brown said. "So, when you get your fish fry on your plate, it's coming out hot. Nothing sits. As soon as it's done in a fryer, it's out on the guest's table." 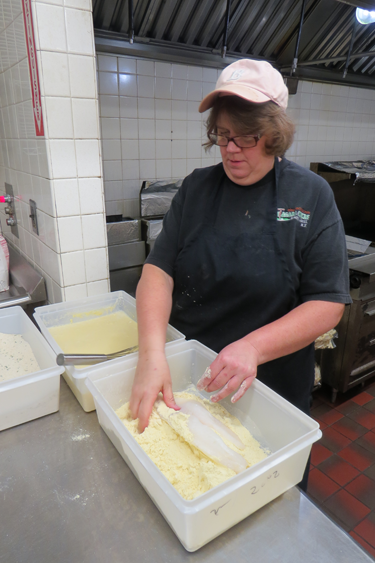 The fish comes with a potato (choices include french fries, baked, mashed or parsley), and Brown's homemade coleslaw. Prices start at $10.25.

Fresh fish fry dinners are available from 4-8 p.m. each Friday - and everyone is invited.

"I have two problems," Brown explained. "No. 1, people think we only do it during Lent. And No. 2, people think, because it's in the Elk's Lodge, they need to be an Elks member. No. Those are my two biggest dilemmas.

"Everyone is welcome, because I rent the hall. I rent the kitchen from the Elks. I am an Elks member, but what I do here has nothing to do with the Elks Lodge. It brings people into the lodge so that they can get a few members out of it, and it also gives them the opportunity to sell liquor over at the bar.

"I do not serve any beverages at all, except coffee. The Elks Lodge serves all the beverages."

"A lot of people think it's just fish fry," Brown said. "If you don't like seafood, (there's) chicken parmesan. Beef on weck. A meatball sandwich. Chicken fingers. Salads. Homemade soups. ... I make my own sauce every week."

"We also do desserts," she said. "I have a dessert menu, as well. Brownies. A waffle sundae we just put on the menu. Coconut-covered ice cream balls. Lots of different desserts."

Brown credited another chef for her winning recipes.

"A lot of what I know is from my friend, Lisa (Tighe), who was another caterer here," Brown said. "She kind of showed me the ropes."

In claiming the "Best Fish Fry" title, Brown said, "I think the greatest thing is, when it's all said and done, how many people come up to you after and say, 'The food was delicious. You did a wonderful job.' Because most people, when they work, they want to hear some kind of feedback from their peers and their supervisors. And the feedback that I get from the people, it's worth it."

Brown caters events inside the Elks Lodge. Rental details are on the LED sign in front of the building at 1805 Fashion Outlet Blvd., Niagara Falls. Call 716-471-1839 for more information. 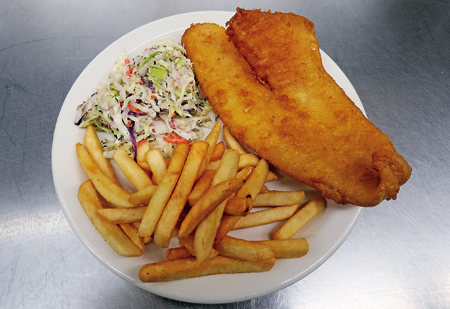