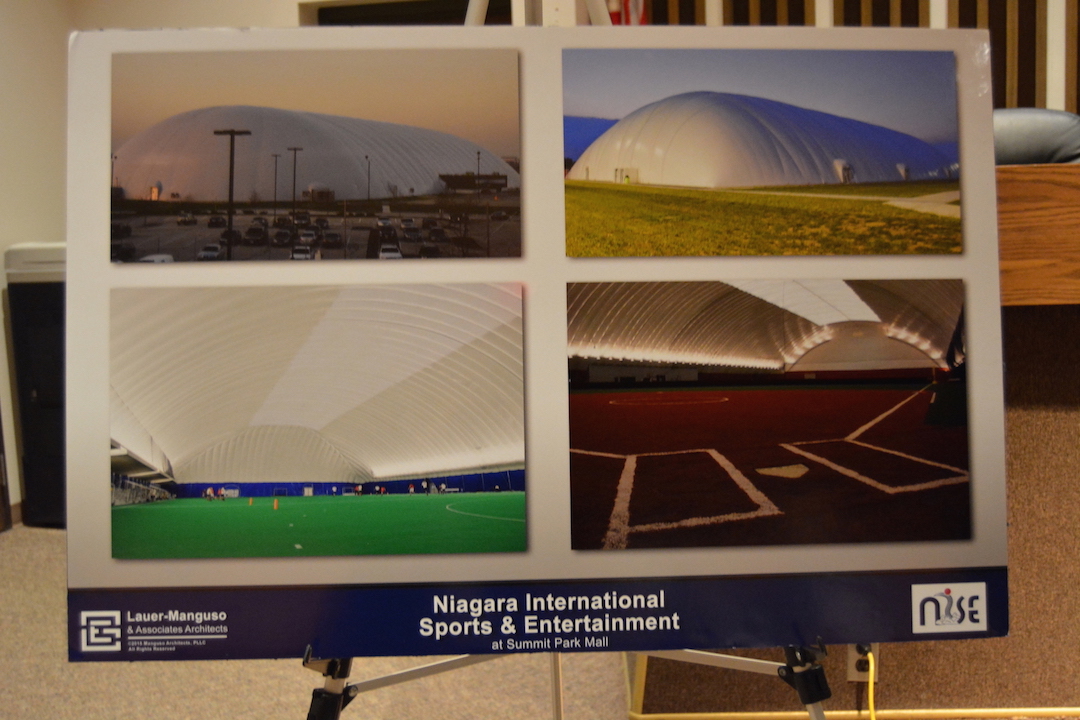 Wheatfield residents discussed the pros and cons of the proposed Niagara International Sports and Entertainment facility for The Summit mall Wednesday night during a public information session held by the town's Planning Board.

Robert J. Blood, landscape architect at Lauer-Manguso & Associate Architects, presented a revised site plan for the multipurpose sports facility planned for the backside of the mall.

"What's recently changed about this project from what you may have seen, previously, is instead of one very large dome, or air structure, we have changed to two smaller structures," Blood said. "The reasons for this are many - mostly it's in response to some of the comments we've heard regarding concerns about the height."

The two domes will be 75 feet high, which is lower than the initially proposed 110-foot single structure.

After the session, Blood said having two domes "provides quite a bit more flexibility as far as scheduling programs. You could have one thing going on in one dome, and one in the other without having that problem in one facility. Value-wise, it's just about the same cost, or very equal, so less impact on the neighborhood, and more value and flexibility for the owner."

During the session, Blood said additional parking might be added at the back of the mall, "if this facility takes off, as envisioned, and it becomes a (thriving) place again." 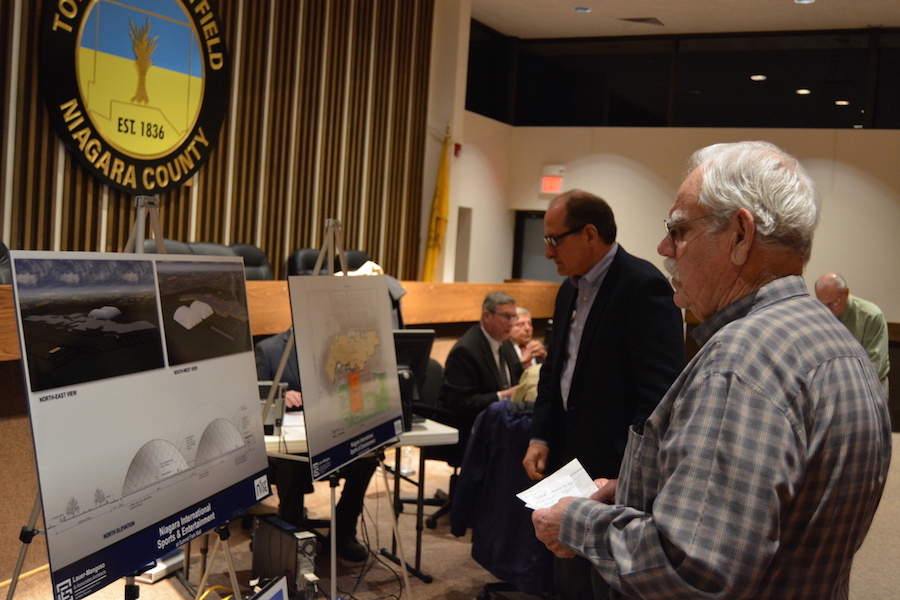 Resident Paul Pirinelli said, "There's tons of parking up front. I'm wondering why you would plan for future parking ... when there's thousands of spaces up front that could be utilized to keep that traffic away from Plaza Drive, Jagow Road - our neighborhoods?"

"This parking lot was designed for the mall at full capacity," Blood said. "But this project is eliminating roughly 400 or 500 spaces. So if this mall comes back to the point where it's fully occupied again, and we have this additional use there, then there would be a deficit on parking. ... This would be in the future, if it's ever required, and that would be if there's a problem with parking way down the line."

Several residents also said they were concerned about the amount of light the facility would emit. Pirinelli said he lived near the Paddock Chevrolet Golf Dome in the Town of Tonawanda and "when that thing went up, it was like someone turned on a nightlight, and it was no longer dark in my neighborhood."

"We're making it a point that we have what's called 'dark-sky-friendly' lighting," Wheatfield Planning Board Chairman Walter Garrow said. "This lighting will not be able to go up and it will have to be zeroed out at the boundaries, so that will be part of our planning involvement." 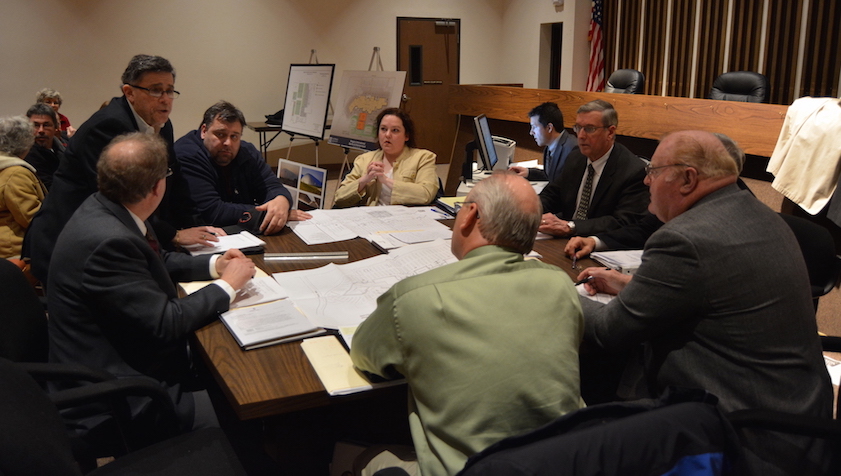 The Wheatfield Planning Board discusses recommendations and conditions with Niagara International Sports and Entertainment facility applicants.

Another concern among residents was noise caused by generators used for the facility, which would run constantly.

"It's a nice, quiet neighborhood, there," said Samuel Cirrito, who owns property on Plaza Drive located behind The Summit mall. "People love living there, because it's quiet. Now you're going to have that noise running up and down that street."

"A lot of the green area along Plaza Drive will remain as a buffer for both noise and light," Blood said.

The noise level at the site is estimated to be 55 decibels. The site must adhere to the town's sound level regulations.

"We think the noise is going to be a situation where they may not hear much more than a window fan-type-noise," Blood said after the session. "There's codes that we need to adhere to as far as how much sound can be admitted ... and we'll certainly adhere to them."

Steve Herbeck, another resident who lives behind the mall, asked Blood about anticipated crowd noise levels. Blood said he knew of studies that show noise levels of similar sports facilities often compared to those of public parks.

"You've got ball games ... kids yelling, parents yelling, you know that type of thing," he said.

Wheatfield resident Rob Vickers said he supported the project "100 percent," and said he thinks some residents may be "missing the big picture." Vickers is a coach for a local youth sports program and also lives behind the mall.

"(I) am fortunate to travel the country, playing in facilities a fraction of the size of this," he said. "They become destinations, and I think what we're forgetting is, you know, we're trying to enhance the experience of this area. We're trying to move forward ... (and) this type of facility will enhance all the business in the area."

Vickers said he and his family frequent local restaurants and stop at gas stations after practices and games held at smaller sporting facilities in the area.

"Basically, I think Wheatfield, New York, should be family-(oriented)," said John Hedlund, Wheatfield resident and owner of the Save-A-Lot grocery store located in The Summit mall footprint. "We've got to drive families in here. ... That's going to help all our taxes, keep our taxes low, at the end of the day."

"I want to see success in that mall and life," he added.

"I wish that this had been built yesterday," Wheatfield resident Donna Stranges said. "I live behind the mall. I'm a patient at some of the doctors' offices in the area. I shop at the stores. I have two premier soccer players at home, and I can't say enough about how I want this to happen, because it's better than the alternative (of) having a ... partially abandoned (mall) that brings vandals. ...

"We've got an abandoned restaurant on the corner of Williams (Road) and Plaza (Drive). Maybe one day, that restaurant will come back to life?"

Pirinelli said, "We're all for our town to make money, collect more taxes, have the mall do something - us living close to that mall are concerned about sound, the traffic and ... the lighting. I don't want to open my windows and listen to generators all night. It's as simple as that. I'm all for doing something with the mall, but not at my expense where I can't live in there anymore."

The Planning Board made several requests of Blood and his fellow applicants, including a noise and light study, and a construction schedule.

Blood said, after getting through these hurtles, he anticipates the site plan will be approved in mid-April and construction would assume shortly after.

"It's a very short timeline to get this ready by September," he said.

Shown are new site plans for the Niagara International Sports and Entertainment facility at The Summit mall. 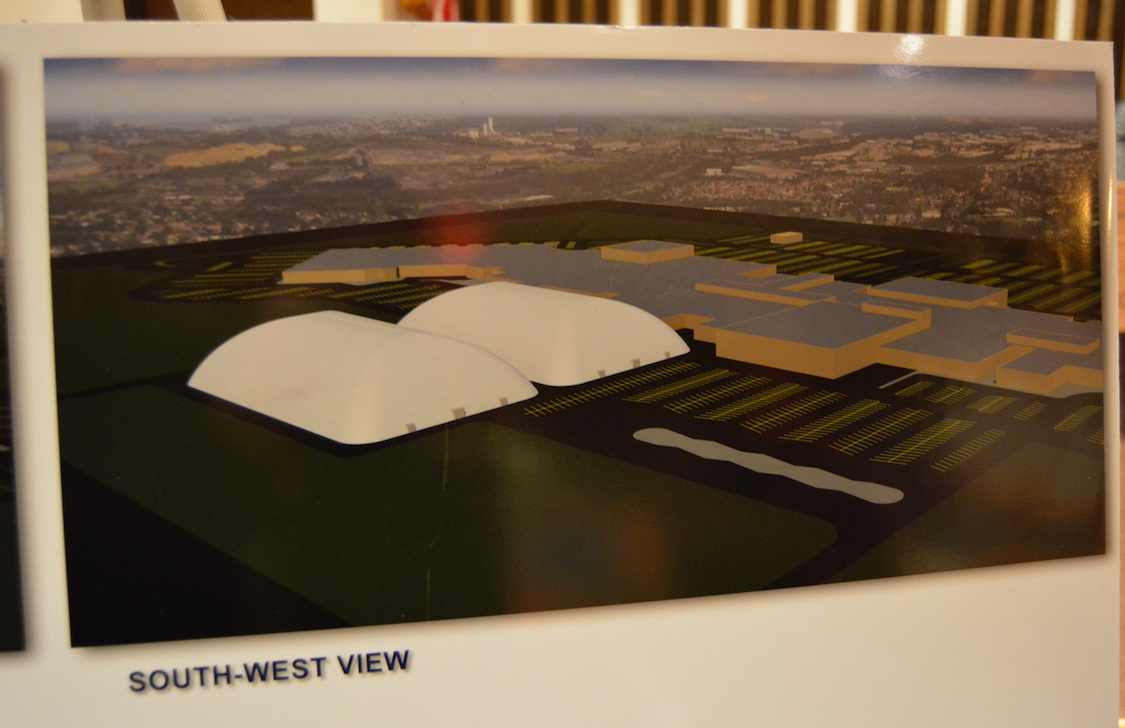