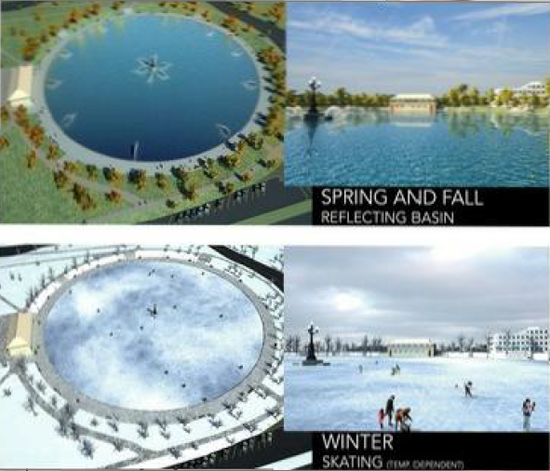 This Village of Lewiston promenade concept plan, which includes an ice rink, was created by CRA Infrastructure & Engineering Inc.

Village of Lewiston: So, what about that ice rink?

It's been 18 months since the Village of Lewiston made public its plans to upgrade the North Water Street parking lot, add extra spaces and build an ice rink and museum off North First Street. In that time, little has been said, with the explanation nothing would happen until funding was in place.

On Tuesday, Mayor Terry Collesano said a tentative deal was in place about five years ago. He explained then-New York Power Authority President and CEO Richard Kessel was considering taking action to bolster the village's waterfront and municipal infrastructure.

"We had our engineers draft up a composite rendition of the way we would like (the waterfront area) to look eventually," Collesano said. "That I took to the state Power Authority, and I was talking with (Kessel). Between the engineer and I and our discussions, I think we sold him on the idea.

"What I was using was the idea that they kind of abandoned us years ago. I had found photographs ... original photograph from 1950s, when they were putting all that soil up there (on the plateau). And on the picture it said, 'Power Authority official photograph.' And, once the job is completed, the land would revert back to the Village of Lewiston with the idea of a housing development. Well, that never transpired. It never happened.

"We got the land back, actually for a dollar. They gave us the land back, but with restrictions. It had to be the environmental habitat area up there, which is there. And the rest of that area is for recreational purposes only. That was it.

"This is what I said to Richie: 'You're kind of stymieing us here, when you took our land from us. You gave it back to us, but with all these restrictions. It's not a fair deal.' But when he saw the photograph, I think his mind starting turning a little bit.

"The trade-off," Collesano said, was NYPA financing a $10 million project that included a second level parking ramp, the ice rink and museum, as well as repairs to the sewer lines.

"The last time I spoke with him was in March, just before the rug was pulled out from under him. It was at a function that was going on at the Power Authority. And he called me aside, and he said, 'Terry,' he says, 'I think we've got a deal here.' We got very close. He says, 'I'll let you know within the next few weeks.' I said, 'Fine.'

"It looked very good. I called (engineer) Mike Marino, because he worked on the original plans. I told him. He was excited. Not too many people knew about it, but the ones that knew about it were excited about it, because it looked like it was going through."

When Kessel unexpectedly resigned, "that was the end of it," Collesano said.

In the summer of 2014, when Collesano made the waterfront plan public, he had just spoken with Empire State Development. He was told Lewiston might qualify for the "Buffalo Billion."

In the meantime, the Town of Lewiston used Greenway money to place the Lewiston Family Ice Rink and warming tent inside Academy Park.

The attraction has been popular, but not without its challenges - namely, initial flooding and subsequent damage to the park grounds.

When Town and Village of Lewiston elected leaders met Monday to discuss issues affecting residents in both areas, the question arose as to what to do with the current ice rink setup.

"Do you want to rip up Academy Park every year, and repair it, which has been what we're doing, or do we want to look for grant money and look for an alternative site that can be beneficial to all? ... In the short-term, expensive. But in the long-term, not as expensive, when comparing the two of them," town Councilman Bill Geiben said.

"The five-year plan on the Greenway is up," town Parks and Recreation Director Mike Dashineau said. "One way or another, we have to reintroduce it this year. To reintroduce it even at Academy Park would require the Village Board to support it."

"Right now, we own the ice rink," Dashineau said. "We still rent quite a bit of it. The ice rink is custom-made right now to be at Academy Park. When I say custom-made, it's that spot - we fit it in there. So, anything that we do differently, there's going to be some upfront costs in putting it somewhere else.

Collesano asked if moving the rink from the park to a paved parking lot on Water Street would eliminate or lessen maintenance fees.

"No matter where you put it, there's always going to be upkeep," not to mention the need for electrical and water connections, too, Dashineau said.

He explained Academy Park is at less risk now than in past ice rink seasons.

"The soil - we rose the level when we put in all-new drains there," Dashineau said. "We don't have to do that anymore. Everything is flat and level. Some spots we needed to raise two or three feet."

"Even if you're putting it in a parking lot ... if you don't have a permanent structure there - like a warming house - you're going to tear up some of the parking lot, too, whether you're staking down a tent or whatever other thing you do," he added. "You'd have to come back and repair that parking lot or any asphalt.

"There's always going to be some (maintenance)."

"I think, where it is now, it brings life to the village at the holidays," town Councilman Rob Morreale said. "It's festive."

"I agree," town Councilwoman Beth Ceretto said. "With the lights on Center Street."

"Ultimately, though, you guys would like to see the rink out of Academy Park, correct?" Town of Lewiston Supervisor Steve Broderick asked.

"I think so," Deputy Village of Lewiston Mayor Bruce Sutherland said, as his colleagues shook their heads in approval. "It just tears up the park."

Geiben asked for a long-range plan.

"Where would you like the ice rink?" Ceretto asked. "Do you have a place in the village that you would prefer it to be?"

"On top of the parking lot," Trustee Vic Eydt said.

"We've been talking about the promenade for a long time," Rotella said. "That concept of having that ice rink ... we reviewed that with coastal resources. They thought it was a good idea. So, you've got state support to do that. Leveraging other types of money, we can make that more of a permanent fixture."

Eydt has been spearheading the village's LWRP expansion efforts with a goal of placing Center Street, including Academy Park, and the south side historic districts within the program.

"By doing that, that opens up a lot more grants," Eydt said.

He noted, however, the modified LWRP will not be in place for at least another year.

"I haven't; I haven't even met the new chairman. I don't know who it is now," he said. "But they've gotten away from that. They don't do that anymore. Everything goes through Greenway now."

"Parking is a very serious problem on the waterfront - as it is throughout the village. But down there it's becoming the place to go in the summer. Even during the winter months, you see a lot of cars down there," he said. "We think that, with another (parking) level to put more cars in there, that would help immensely.

"Also, a skating rink, I think, would fit in very nice down there during the winter months - activity going on all year-round.

"The museum, I still like that idea. I love that idea - depicting the history of the waterfront area and the steamships, and maybe a small concession stand could be in there that somebody could operate, or maybe the village could do it with just vendor machines? ... Something that would offset the cost of maintaining on a day-to-day basis.

When the LWRP is in place, "We have been told by the state that there could be a lot more state moneys available down the road. So, this is what we've got in the back of our mind," Collesano said.

While the village continues to plan for the future, Collesano said the ice rink would likely remain in Academy Park this winter.

"The village is not against, per se, of having it there. It's just that we thought that there may be better locations within the park," he said. "There's no objection to having it there, per se. ...

"And we still don't know what the overall plans are going to be for the park itself. That's another thing we have to look at, as time goes on, once we get the final plans."

Collesano said Lewiston's service groups were asked to provide input on what the park should be, and how each organization could use it for different events.

"For instance, where the grandstand is now, maybe it won't be there," he said. "Maybe it will sit over on the other side of the field. Maybe we won't have it all. The building that's there now, the grandstand, just about every organization we talk to, they do not want it located like that. Especially the Art Council, because they say they can't have any programs there - especially in the evening during the summer months - because the sun goes down in the west, and all the actors and the ones that are up on stage are looking into the sun. They can't see. So it may be adjusted to over, maybe, on the corner towards Syros.

"We don't know yet. These are all things that have to be determined. Also, with the promenade around the park, which eventually we'll put in, that could disrupt things, and change the overall outlay of how it's going to be completed.

"There's so many things that have to be taken into consideration. That's why we're kind of in limbo right now." 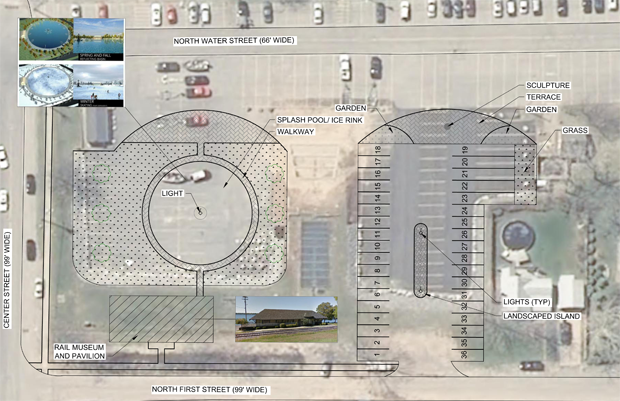