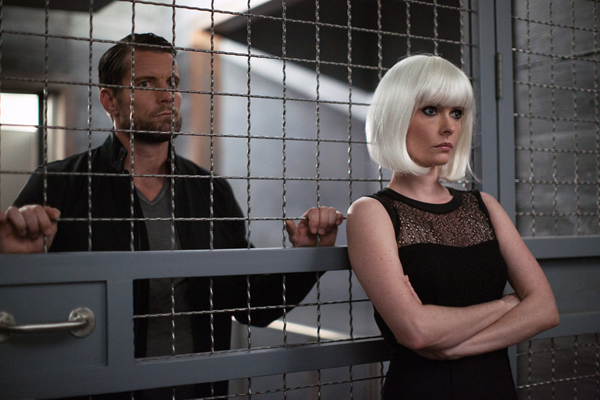 "Grimm" episode "Eve of Destruction": Pictured, from left, are Damien Puckler as Meisner and Bitsie Tulloch as Eve. (NBC photo by Scott Green)

What is going on here?

On the back end of "Grimm's" fourth season last year, Juliette (Bitsie Tulloch) turned into a Hexenbiest - nasty and super-powerful - betrayed Nick's mother and then tried to kill Nick - before taking a double-dose of crossbow courtesy of Trubel.

In an instant, Nick's girlfriend of four seasons, the love of his life, was gone.

Producers emphatically said Juliette was not coming back.

Nick moved on, trying to solve the mystery of Black Claw while figuring out how Trubel fits into Hadrian's Wall and its work to end the Wesen uprising. He even moved in with Adalind, formerly his sworn enemy, and started to have feelings for her as they raise their child.

Viewers had pretty much moved on, too, focusing less on the events of last season and instead trying to unravel the mysteries currently in play.

But, lo and behold, at the end of December's midseason finale, as Nick and his merry men were cornered by Black Claw, a woman with a blonde wig showed up and cleaned house.

Tulloch re-emerged, not as Juliette, but as Eve, a reconditioned Hexenbiest fighting against the Wesen who've gone astray.

When "Grimm" returns tonight (9 p.m. NBC), fans will learn what happened to Juliette once she was carried out of Nick's house.

In a conference call Monday, Tulloch said, "She almost was broken. Hadrian's Wall knew how powerful she was and kidnapped her. You know, Trubel shot her with what we now know are tranquilizer darts, and (Hadrian's Wall) basically broke her down and turned her into ... a fighting machine." 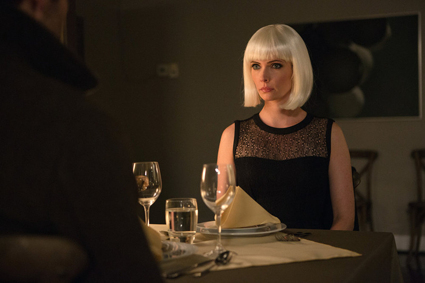 Tulloch explained the change was necessary. She said Juliette had become polarizing.

"Going forward, to keep a show alive and to keep the fans engaged, you have to really shake stuff up and, quite possibly, piss people off," Tulloch said. "And I just sort of understood that, going forward, that there almost needed to be a greater antagonist then there had been thus far. And what better antagonist do you have than the women who is the love of (Nick's) life, who he trusts, you know, implicitly, be the one who's now basically out for blood involved in the death of his mother and whatnot?"

"I certainly didn't expect anybody to be happy about it. And they weren't," she said.

Now, it's the same show, but with a different interpretation of the character.

"I will definitely admit that I had a little bit of mixed feelings when they - the producers - called me in March and then said, 'This is our idea going to season five,' because it was hard to say goodbye to Juliette," Tulloch said. "You know, by that point, I had played her in various iterations, whether good or bad, for four years. So I knew I was going to miss her. And I knew it was going to be hard to say goodbye to her. But, I'm having a blast with this new character, Eve. It's really fun. I got to do a lot of research, you know? They were saying you have to watch ... 'Nikita' for inspiration."

"Juliette's not coming back anytime soon," Tulloch said. "You know, I think it remains to be seen ... whether or not she does start to develop feelings for Nick.

"It is TV. She did love him for a long time.

"Right now ... she's more focused on the work stuff. But, I have seen nothing but pretty much overwhelmingly positive and excited fans reactions to me still being a part of the show, and excited to see what the new character's like."