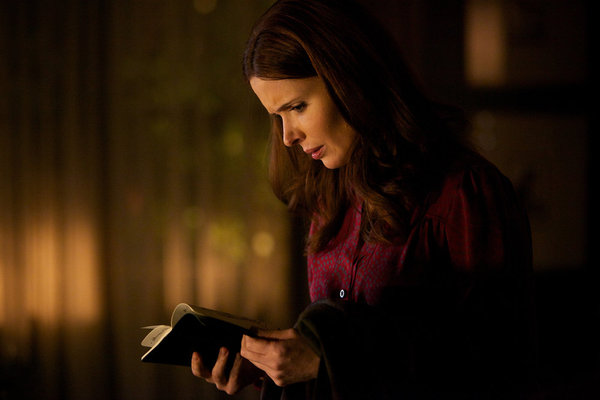 Pictured from "Grimm" is Bitsie Tulloch as Juliette Silverton. (photo by Scott Green/NBC)

There's no denying science fiction is a genre unlike any other.

From Trekkies to Twihards, Comic-Con to Dragon*Con, sci-fi fans are hard-core dedicated to the programs they love (read: smart, demanding and costumed).

To obtain this level of fandom, sci-fi shows often present twisty, mythology-rich stories shot against green screens with actors in layers of makeup and prosthetics.

It's not the kind of world or work that appeals to every actor.

But for "Grimm" star Bitsie Tulloch, it's a grand adventure.

Tulloch, who appeared in the Oscar-winning silent film "The Artist," jumped headfirst into the backstory of "Grimm."

"When I first booked the show, I really seemed like a little bit of a nerd," she says. "I started doing a lot of research about The Brothers Grimm and I found out a lot of very interesting things, and I would call Jim (Kouf) and David (Greenwalt), our showrunners, and say, 'Oh my gosh, did you know this?' And sometimes they didn't, and so I would tell them. And I think that it's cool the way these are sort of fairytales that are fractured, really. The sort of modern interpretation of these fairytales, I think, is very fascinating."

Tulloch says she thinks "fairytales, in general, are just kind of great ideas to do for a show, because I think one of the things that is very common among fairytales is this - I feel like there's a very innate psychological need for a safe haven that's, like, inherent in all humans. So in a lot of fairytales you have this protagonist who's fighting to return home or something, and I think that's a great format for each episode, is you have this sort of quest, of sorts. I think that's fascinating.

"I think the tales were often used as warnings and they would often explore problems of family tension and family values, and I think that's played into it. And what a great idea that (producers) Todd (Milliner) and Sean (Hayes) had, which is to use the stuff that's in public domain, and I think it was just a cool idea for a show. So I'm definitely very excited to be a part of it."

Fortunately, for "Grimm" fans, Tulloch says there's no shortage of interesting material to draw from for the show.

"We have such an abundant amount of stuff to work this," she says. "Of The Brothers Grimm alone, there were 211 tales and 585 legends. And we're not only using The Brothers Grimm, (the producers') sort of party line was that every fairytale was fair game as long it's in public domain. So there's a lot of stuff for us to be pulling from down the road, too, which is very exciting."

On the show, Tulloch's character, Juliette, is the only lead who's not a cop or not a monster (or so we think). She is unknowingly dating a "Grimm," which is to say a creature-hunter with a storied and heroic lineage. Beginning with this week's episode, Juliette will start to discover this "other" side of boyfriend/detective Nick (David Giuntoli).

"This script was one of the first times that I actually get really, like, drawn into all of the madness," Tulloch says. "My character gets kidnapped and it was very grand in scope, actually, with the fire-breathing dragon and everything."

This storyline, she says, "opens a lot of doors. And there's another episode, episode 16, where I very much get drawn into this, and it's sort of starting to come to a boiling point in which I really need to know, and he needs to tell me. But it's going to happen sooner or later. I can't say when, but obviously he's going to have to tell me."