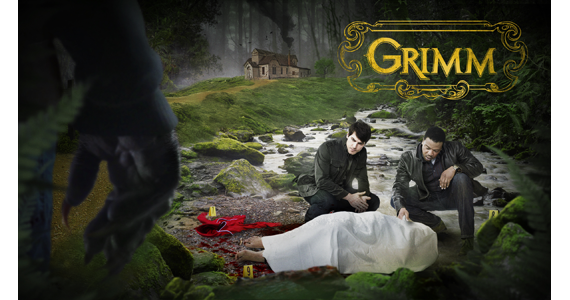 'Grimm,' yes, but fun to watch

When is a procedural not a just a procedural? When the villains are characters from "Grimm's Fairy Tales."

NBC's new series "Grimm" takes advantage of a rich set of literary characters to offer viewers a different take on cops-and-robbers. The show is a perfect fit for Friday night, which, thanks to shows such as "The X-Files," "The Ghost Whisperer" and "Fringe," has become sci-fi's go-to night.

"Grimm" centers on Portland homicide Detective Nick Burkhardt (David Giuntoli), who, shall we say, sees people in a different light. Nick discovers he's a "Grimm," a legendary investigator and pursuer of mythological baddies. By day, he works with PPD homicide Detective Hank Griffin (Russell Hornsby), and by night he works with Monroe (Silas Weir Mitchel), who is, well, a werewolf. The two of them sniff out the feature creatures.

When presented with the show's concept, Hornsby figured "it would either be very cool or very silly," he says. "Yeah, I mean quite honestly, you're reading it and you're saying, 'Wow, this could be really cool, like I would love to work on this show.' But then, you know the other side -- you know, other part of you goes, 'Wow, how will this work?' You know? And you just hope that you have smart people in the writing room and wonderful directors and very creative minds behind it, which we do have. And I think we've been the former, which is, you know, we've come up with something that's very cool.

"I thought the concept was fun, definitely a different spin on the procedural and on the fantasy. And I think their idea of ... enveloping the fairy tales with the real world is really what inspired me to really want to be a part of the show."

So far, Nick has been able to keep his "Grimm" side from Hank, and Hank from Monroe. His fiancé, Juliette Silverton (Bitsie Tulloch), is also in the dark, but Nick thinks that's for the best. As the season progresses, however, all sides may come together.

"I think as the series goes on it becomes more and more difficult for my character to keeps these two worlds separate," Giuntoli says. "In the first several episodes, it's -- they're fairly separated. The monsters are only going after a different perpetrator and not very much me.

"And so, (once they) start to come after me and my life, and my life includes the precinct and my life includes being at home with Juliette. And then, they start going after, maybe, I don't want to give too much away, some of my loved ones ... it becomes a little more difficult for me to keep this lie going."

Whatever happens on screen between Nick and Hank, off screen the actors say they're having fun working with each other.

"I mean, first and foremost, we have a wonderful chemistry," Giuntoli says. "I think it's been great. Our entire cast has really gelled nicely off screen, as well as on screen, but Russell and I, from my point of view, it's just been an honor working with him because, you know, he's, as I like to say, he's a youthful veteran of the world of theater and acting.

"So, I've learned so much from him. It's just like, you know, as far the trade goes and the craft, and you know between him and Silas just getting to spend so many hours with them, it's like going to master class."

"And, you know, I mean the joy of working with David, David's a very smart, intelligent actor, and has a wonderful approach to the work, as well, which is totally the opposite of my approach," Hornsby says. "So it's been wonderful to sort of watch how he approached the material and just learning from that. And also, he has a great sense of humor, so, you know, we're able to, like, wisecrack on set. And it makes the day go by a lot faster, just being able to work with somebody who has a sense of humor, takes himself seriously, but not too seriously, but is definitely talented, but also engaged in the work."