After a long career in local government, Town of Niagara Councilman Danny Sklarski is retiring as a public official.

Since moving to the Town of Niagara 37 years ago, Sklarski has helped fuel the area's success, while holding positions including town councilman, deputy supervisor and county legislator.

"My philosophy has been, as an elected official, you always have to remember - first of all - why you're there, and secondly, who put you there," he said.

Sklarski first ran for Town of Niagara councilman after gaining recognition from his success as president of the Town of Niagara Tax Payers Association, where he worked to keep Niagara-Wheatfield School District taxes within an affordable rate for residents.

"We were successful in the primary. I won that first primary by one vote. So, the cliché is 'Every vote counts.' Well, this is quite true and I'm a prime example of that," Sklarski said.

After being elected, Sklarski said he never looked back.

Throughout his public career, Sklarski has strived to help those who deal with daily struggles, particularly those with mental or physical disabilities and seniors.

Retiring Niagara County Clerk Wayne F. Jagow said, "We always were laying out our plans for translating the government into public service, and he really had the best interest of his constituents at heart - and especially in some of the areas that we needed to provide a better service for them." 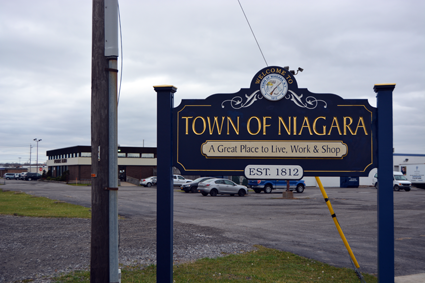 Shown is a portion of the sidewalk Danny Sklarski implemented to provide safe passage for Opportunities Unlimited Niagara employees on their way to work. 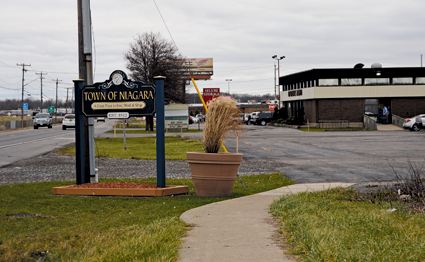 One project Sklarski is very proud of is the installation of a newly paved sidewalk along Fashion Outlets Boulevard. The idea of adding this sidewalk came to him as he drove down the road one winter and noticed Opportunities Unlimited of Niagara employees being dropped off at the corner. They had to walk through slush alongside traffic to get to work.

"Those poor people are walking on the road and they were getting splashed - it was dangerous," Sklarski said. "It's a simple idea, but what I had to go through, you won't believe it."

"He was the legislator that led the fight for it," William L. Ross said, who is also retiring as Niagara County Legislature chairman at the end of this year. "Dan was fully engulfed in that project. (He) not only initiated it, followed up on it and made sure it was completed."

The county shut down Sklarski's plan three times while he served as legislator, but he did not give up. Finally, after two years, his efforts paid off and a proper walkway was created.

For his efforts, Sklarski was awarded the Local Public Official of the Year Award by the New York State Rehabilitation Association Inc. in 2004. He was nominated by OUN.

Sklarski said he also is very proud of his work with the Health Association of Niagara County Inc. helping seniors.

Sklarski said he values these awards because they "represent who I am, meaning (I have) a compassion for those who need the most help in our society. ... That's extremely important to me. And I've committed myself to that - not only in government, through church and everything else that I've done."

"The older citizens liked him very much. They liked his personality and ... he worked very well with them. I think he was very proud of that," Ross said.

Along with his experiences in helping not-for-profit organizations, Sklarski holds a strong business portfolio, as well. His background as an auditor for the New York State Office of Parks, Recreation and Historic Preservation, as well as a corporate accountant and buyer for the former DuPont in Niagara Falls, allowed him to make business decisions that benefited the economy both on the town and county levels.

"It took five years and we were able to take that deficit and turn it into a profit," Sklarski said. "I was very proud of that."

Sklarski said the Town of Niagara Town Board is made up of individuals who possess extensive background knowledge in business and, as a result, "The Town of Niagara has had a history of working very, very well with (government) and businesses. Very well." 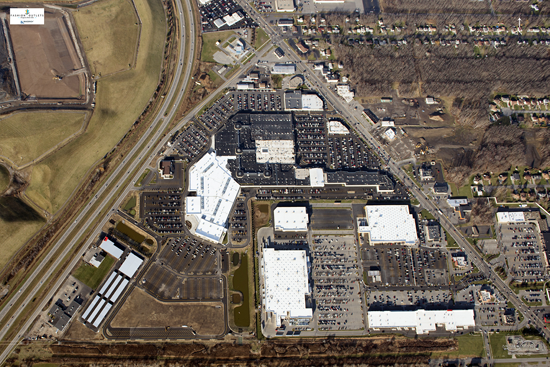 One prime example of this is the Fashion Outlets Mall on Military Road.

Despite being the smallest town land-wise, Sklarski said the Town of Niagara maintains its No. 1 status of "the taxable sales tax leader in the whole county."

"We worked with the mall to help their expansion and give payment in lieu of taxes, and they gave us money every year," he said. Of that payment, the Town of Niagara has given $50,000 to local not-for-profit organizations and churches each year.

"This was a way that government received from businesses like the mall and gave back to all those that make a community what it is and still is today, and that was a great thing," Sklarski said.

Money brought in from the outlets allowed the town's recently named Veterans Memorial Community Park to be established. Sklarski helped define the planning process of the park, which he now refers to as a "crown jewel of parks," not only in the Town of Niagara, but in Western New York.

"The plan is to add to it and keep it going and, through the help of the Power Authority and the Factory Outlet Mall and other entities, we've been able to do all this at no cost to the taxpayers. And we continue to do that to this very day," Sklarski said.

Shown is the Wegmans store located on Military Road.

Another big business Sklarski helped bring to the Town of Niagara was Wegmans. The company first looked into surrounding communities, but couldn't seem to find a home for one of its stores in Niagara County.

"We had heard about it, and Wegmans was ready to pick up their papers and pencils and leave Niagara County completely," Sklarski said.

With help from a hired economic development director, Sklarski and other town officials were able to negotiate with Wegmans. Subsequently, the store was built where it stands today, across from the Fashion Outlets on Military Road.

"That was a tremendous benefit, because it gave the people ... an opportunity, an option, where as not one supermarket dominated everything," therefore keeping prices lower, Sklarski said. "To this day, that is the only (Wegmans) store in Niagara County ... and that is a testimony to (the fact) ... we have an ability to work with businesses unlike any other municipality that I know of in Niagara County."

"I really cherish that the people of Wheatfield took me in as though I was one of their own," Sklarski said. "I have a strong kinship to many of the people in Wheatfield to this day."

As a county legislator, Sklarski was appointed chairman for community services, which Ross said at one point made up approximately 45 percent of the budget. In this position, Sklarski oversaw Niagara County Community College, the Department of Motor Vehicles, the Office of Aging, the Youth Department, employment training, public health, mental health, the former Mount View Assisted Living Facility, veterans, historians and social services.

Jagow said that, when working to upgrade these services, Sklarski was "ready to listen and champion our cause to the legislature."

"He took it very serious, what his duties and responsibilities were in whatever he was in during his elective offices, whether it was a town councilman or a county legislator," Ross said.

With all of his responsibilities, Sklarski became well acquainted with department heads throughout Niagara County and grew his knowledge of the inner workings of the government.

Town of Niagara Supervisor Lee S. Wallace expressed gratitude for Sklarski's service on the Town Board. Wallace said, throughout his first year as supervisor, Sklarski has been "a real help and his experience really made it transition ... very, very easy."

As a retiree, Sklarski said he hopes to see completion of the town's project to take over the former U.S. Army Reserve Center and Area Maintenance Facility on Porter Road.

"Once it's turned over to our town, hopefully next year, it has a great opportunity to help our area and Niagara County and the state and the federal government, because of its proximity to the air base," Sklarski said. "And it could mean added jobs and revenue for the Town of Niagara. So this is a situation that is very, very viable for the future of our town and our growth and our town in that area."

Sklarski also said he would like to see "the continuing growth of Military Road where the mall is now," describing the area as "prime property."

In addition, he said "The other end of Military Road from (Lockport Road) and down could use some development, which is going to happen - I believe it will."

Sklarski referred to the Town Board's recent discussion of looking into rehabilitating a property on Grauer Road for resale, allowing it to become taxable.

Wallace echoed this, as he said the board is "trying to work with the owner ... get the county to work with us, get it mediated, because it's got some hot spots, and clean it up and resell it."

Both Sklarski and Wallace also said the old Military Road School has potential for future development.

"We need to improve in certain areas, but, for the most part, we're doing a very good job, and I don't see any reason for it to change at all based on Mr. (Lee) Wallace and what I see of his leadership abilities," Sklarski said.

As for his own future, Sklarski said he hasn't had the chance to stop and think about what future goals he will pursue.