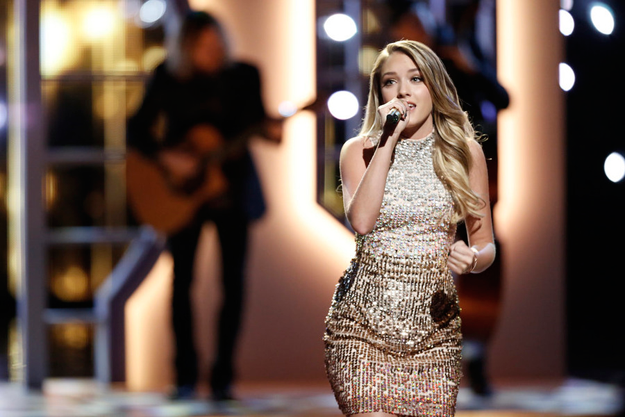 In any other season, Emily Ann Roberts would be "The Voice."

Had it not been for Jordan Smith using his super-high voice to wallop each and every song - and America's fascination with the singer was who wasn't even shown while he sang his blind audition - the 17-year-old songstress would be touring the TV talk show circuit right now.

But even in "defeat," Emily Ann is poised to become a music star.

During the season, her coach, Blake Shelton, said, "There's no reason that you can't be the new power female in mainstream country music," and "I've never had a better collaborator in nine seasons of doing this show than working with Emily Ann, because she is so smart and knows who she is as an artist."

Emily Ann's semifinal rendition of Dolly Parton's "9 to 5" was picture-perfect. She commanded the stage like someone twice her age and offered one of the season's best performances.

In the finale, Pharrell called Emily Ann's voice "classic," while Adam Levine called her "incredible" and "the real deal."

Blake added, "You possess this vocal power - this range - you have all of these things - all these chops that you're the master of. But, the best thing about your performances is you ramp it up. You start off simple, and, as the song goes along - as the song builds - that's when you start throwing in the power. And it makes for these incredible performances that you can't look away from.

"You're so unbelievably ahead of your time, sis. So great."

Less than 24 hours after returning home to Knoxville, Tennessee, Emily Ann chatted with BTS about life after "The Voice," her plans for the future, and a dream performance with Ricky Scaggs.

Behind the Screens: What was it like returning home yesterday?

Emily Ann: It was amazing. It was so busy; I've been looking forward to it so much. I had a big group of people waiting for me at the airport and there were people waiting for me outside my neighborhood last night with signs ... telling me how proud they were of me. It's just so overwhelming to see all the support that I've gotten from my community. It's really awesome.

Behind the Screens: Now that you've had a plane ride and a couple of days to digest this, how do you sum up your experience on "The Voice"?

Emily Ann: I wouldn't trade this experience for anything. I've learned so much, and I've met so many amazing people. And I know that this is not the end; it's just the beginning. I'm super excited about that. I want to start writing and I want to start getting together some stuff that is just a true representation of who I am as an artist.

I'm ready to get to work.

Emily Ann: I never dreamed - ever - of making it as far as I did. I never thought that it was possible, and so I just didn't let myself dream that big - because I didn't want it to hurt more.

Round after round, I just kept going through, and it was amazing. It was so overwhelming because I never - I was so worried about turning the chairs. So I never even imagined that I would make it as far as I did. It's just really, really cool to see what hard work can do.

BTS: As someone who has watched and written about this show from the first season, when you guys got into the live rounds and I heard Jordan perform, like most TV critics, I thought he would be very difficult to beat. Did you have any conversation with the other singers about who might win?

Emily Ann: I think that everyone this season was so incredible, and we're all so supportive of each other. But we all know how incredible Jordan is. Jordan deserved it, I think. I think that, out of anyone who was on this season, he just is so incredible and so different. And I think everyone is so happy for him. He truly deserves it.

I think there were other people who popped up that we thought maybe could win - other than Jordan - but I think it was very, very obvious who the front-runner was. And he deserved it. Jordan is so phenomenal.

BTS: Do you take a little bit of a break and sort of get back to normal and then plot out what your next steps are going to be?

BTS: What would you like to have happen in the next six months to a year?

Emily Ann: I want to start writing more. I want to get with other people and continue to grow in different ways. I've never had vocal lessons or anything like that until this show, and it helped me so much.

I'm just excited. I want to continue to grow, and work on who I am as an artist and really figure that out. And start writing. I want to start getting my own music out there - is the goal for moving forward. 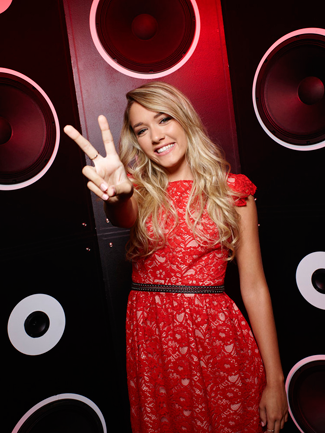 BTS: You had songs that charted on iTunes. When I went to iTunes on Tuesday to just do a general music search, your name was the very first name that popped up - out of all the musicians on iTunes.

BTS: How do you wrap your brain around your newfound fame? Clearly, the reception you got at the airport when you returned home was different than the one you had when you left Knoxville.

It's crazy. It's crazy to see how I left with no one really knowing who I was, and then I came home, and now people that I don't even know are coming out of the woodwork to tell me that they support me and that they've been voting for me. ... But I'm so thankful for it. It's just totally what this show has done for me. Because no one would've ever known me or I would've never gotten that exposure without this show. 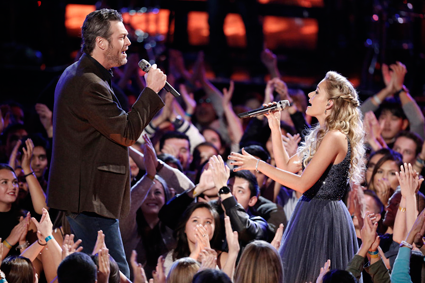 BTS: Each coach has a certain number of singers on a team. Only one is going to win. Are there conversations about taking advantage of your fame and the fans' interest in your music? Unfortunately, we see a lot of singers who don't take advantage of this platform.

Emily Ann: Blake has just kind of focused on me staying true to who I am after this. He really doesn't want anyone to change me, or mess with anything that makes me the artist that I am.

I'm so appreciative of that - that he really loves me for me, and my songs and my music, just the way I am. That's so awesome to have someone like that in your corner who just really supports you. ...

We've become super-close friends and I know that our relationship will continue on outside of the show.

BTS: Obviously, you would've liked to have won, but the fact that you have Blake Shelton as an ally and a mentor, that's about as good as winning, right?

Emily Ann: You know, definitely. He is so incredible in country music. And having him on my side makes me feel really good.

I'm excited about what the future holds. 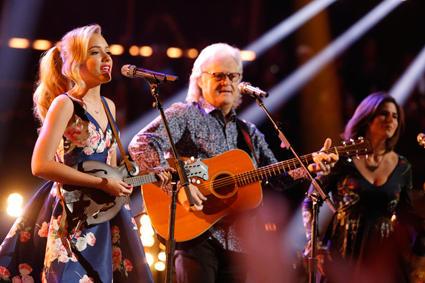 BTS: On your very first performance - the very first time we saw you - you said you're a big Ricky Scaggs fan. What was it like to perform with him on the finale?

Emily Ann: That was so incredible! I've dreamed about that my whole life. I dreamed about sharing the stage with him. I just never thought that it would actually happen. So, to get that chance to perform with a legend like him, it was just so incredible.

Honestly, when we were rehearsing, the first time he opened his mouth and started singing, my eyes were just filling with tears. I was trying so hard to just get a hold of myself, because I didn't want to cry, but I really could have!

It was just such an incredible experience. He's so talented. It was an honor to be up there singing with him.

"The Voice" returns for season 10 in February.