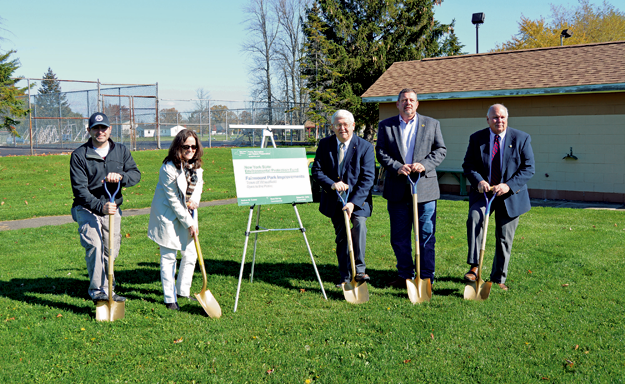 Town of Wheatfield officials broke ground Monday on phase one of the Fairmount Park improvement project, one that will include a new handicapped-accessible bathroom facility and a trail system that will connect sites within the park.

This moment comes after obtaining a $350,000 grant from the New York State Office of Parks, Recreation and Historic Preservation through the United States Environmental Protection Fund.

"Basically, it's an update that's been due for many years," Town of Wheatfield Supervisor Robert Cliffe said, adding that the grant process began five years ago. It's taken this long ... to go through the process, get the approvals. ... Finally, we are there. We're at the point where we are down to the very last signature on the final piece of paper."

Construction of the project is hoped to begin soon and will be completed by NFP & Sons of Wheatfield.

"It's a great local company, they're good people and I'm sure they'll do a good job for us," Cliffe said. "I don't know how much we might get done this year, if any. We're sort of hoping that the pathways are done in the spring, so that when next summer comes the people will be able to use it."

"We're actually going to start a project that I think is going to be great for the community, especially the trail," said Western New York Regional Grant Administrator for Parks, Recreation and Historic Reservation Noelle Kardos. "Once you put a trail in a park, it opens up all sorts of things."

During the summer, several outdoor recreational programs are held at Fairmount Park, including camps and various sporting events, games and tournaments.

"We (Wheatfield residents) are big on physically recreation," Town of Wheatfield Recreation Director Mike Ranalli said. "Exercise stations are part of the grant itself."

"When people are watching the games, the parents will be able to exercise and walk around and it's good for senior citizens too because they're going to have the free standing equipment that's geared toward them, so I'm very excited," Kardos said.

The 6-foot-wide trails have been designed to cater to persons using walkers, wheelchairs, scooters and other means of assistance.

"This is going to really make it nice for parents, some of them who are handicapped, the grandparents who come and see their grandkids and they'll actually have a stable pathway to walk on," Town of Wheatfield Gilbert Doucet said.

The new pathways and updated restrooms are not the only plans under discussion for Fairmount Park.

"There is potential for phase two yet ... but this is an awfully good start," Cliffe said.

Plans for phase two could involve the installation of more paths to run throughout the entire park, as well as more outdoor exercise equipment stations to be spread out along the walkways.

"If you look at the park on Google maps, you'll see the pond divides the park into the playground and picnic area and the ball field area," Ranalli said. "The path will connect the whole park and tie it into one big park."

"If we get a little bit more grant (money), we can do the other half of the park, which would be great," Doucet said.

Councilman Randy Retzlaff expressed his aspiration for the future of the park. "Hopefully they (the state) will see we are putting this to good use for the people and (we will) get some more money and keep moving onward," said. 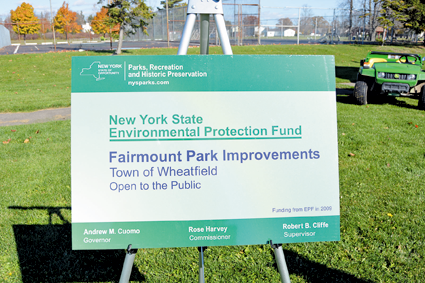