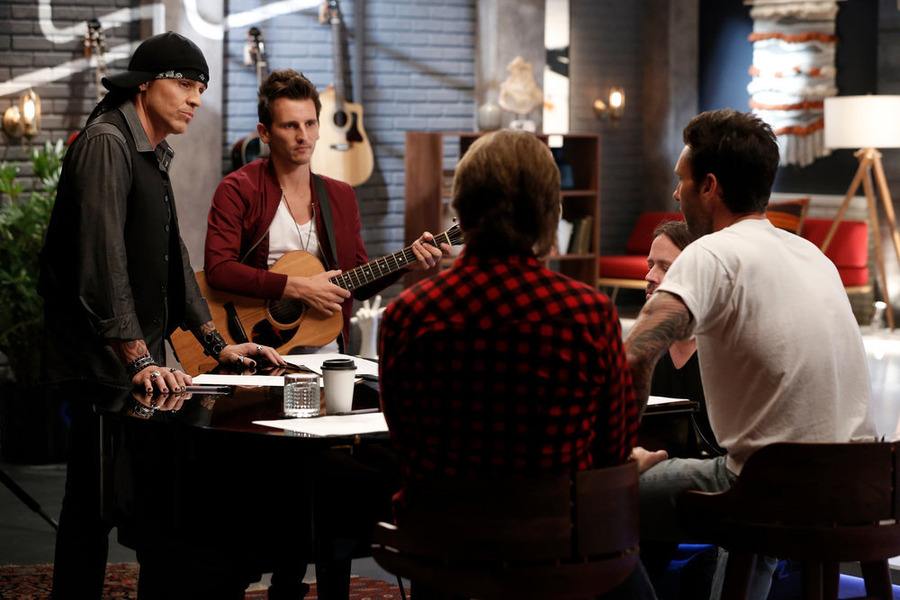 "The Voice" "Battle Rounds": Pictured, from left, are Many Cabo and Keith Semple. (NBC photo by Tyler Golden)

Personality, performance pays off for 'Voice' 'Battle Round' winners

"The Battle Rounds" are an opportunity for blind audition standouts to prove their mettle and show growth on "The Voice." They also allow an audience to see who can sing a song better, which is helpful in the show's latter public voting rounds. 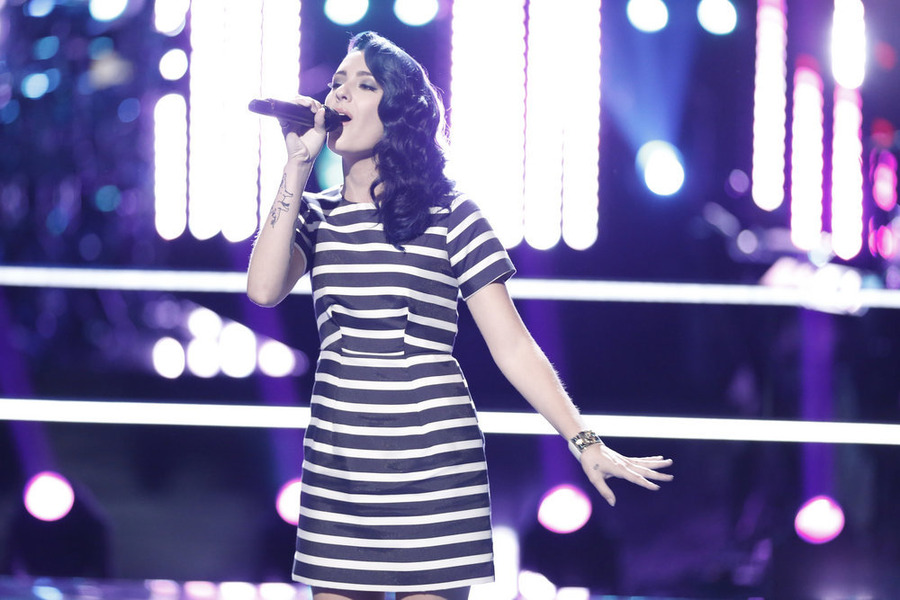 Ellie defeated Tim Atlas in a "Battle" of The Neighbourhood's "Sweater Weather."

Gwen's "Mini Me" was super sultry and moved across the stage like a seasoned veteran out on tour. Pharrell said she hypnotized the crowd with her skills. Blake said Ellie was fun and unique.

"You know, I feel like I've grown tenfold since my blind audition," Ellie said. "You know, I never performed in front of that many people before. Usually it's like 10 people in a bar. So I really had to focus on connecting with a larger audience, and so that was like a huge hurdle I had to come over.

"Thankfully, like I rely a lot on my kind of goofy personality to get me out of uncomfortable situations. So it has helped so far, because I just kind of, you know, hide behind my humor and everything to be able to not show how scared I am.

"But Gwen really focused for me - focused on, like, I need to open my eyes more. Because when I sing, it's very personal to me; music is very like intimate and so I kind of turn inwards a lot. And on the show you can't do that because, you know, you have that split second to connect with America and, you know, if your eyes are closed they're not going to really feel a song with you.

"So that's the thing that she told me to work on was really opening up my eyes and looking at everyone and bringing them into the song. And it's something I feel like I have done and I have learned a lot and grown since blind auditions and since being able to connect with a larger audience. That's terrifying to do on such a large scale, but I think I've got it down." 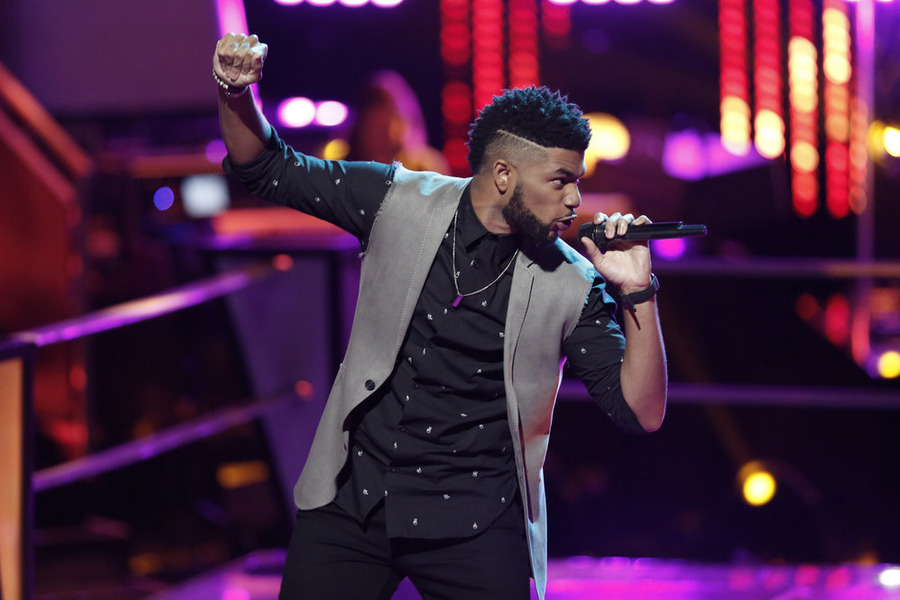 Mark defeated Celeste Betton in a "Battle" of "Ain't No Mountain High Enough."

His Motown-worthy performance brought a smile to each coach's face. Mark's singing brought Pharrell to his feet, while his high-stepping led Adam to inquire about his dance moves. Gwen told him, "You are incredible."

"I feel like I grew a lot working with Pharrell ... in the blind auditions to the 'Battle Round," Mark said. "Pharrell is very into artists being themselves and, if they are, he has this thing called 'other,' and he likes that. So he is always urging me to keep my personality and just continue to be who I am.

"And I was very, very intimidated going into this round and I expressed that to Pharrell and (team adviser) Missy Elliott. You know, singing with a girl was different and, you know, I was really intimidated. I didn't know how I was going to do it. But, you know, he just told me to be myself; don't lose any of the personality. He was, like, 'The personality is part of what makes you. Don't lose that; let it grow.' And I think, you know, I grew a lot." 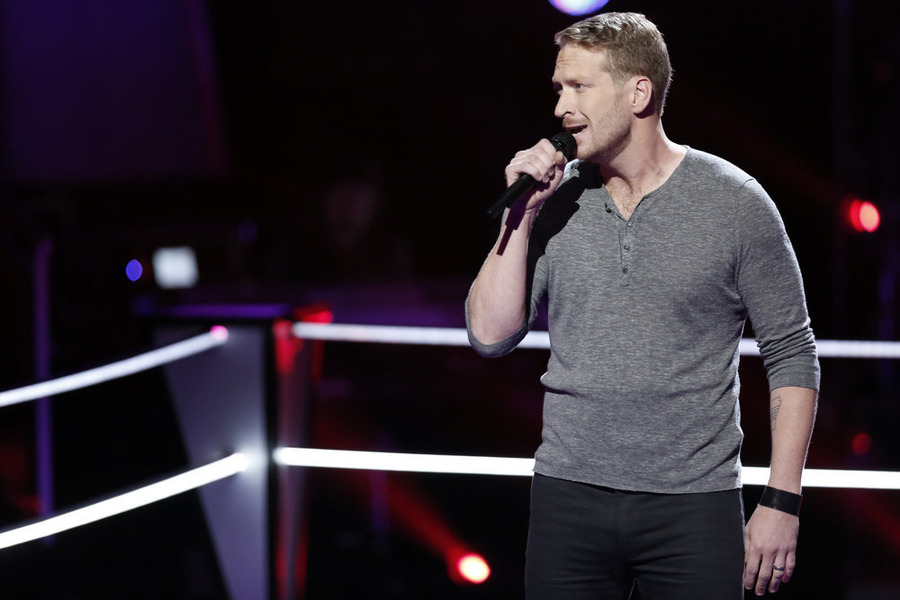 Barrett defeated Dustin Christensen in a "Battle" of "Walking in Memphis."

The singer was confident and consistent. He looked like a pro and sounded like a star. Pharrell called his singing style "a big deal," while Adam said Barrett is one of the best singers in the competition. Blake said Barrett is special and has a future in music.

"I feel like, from a growth standpoint, I have really noticed - especially in the few live shows that I have gotten to play since the taping of the auditions - that, vocally, I'm really in a new place as far as my ability and what I am capable of even at my live shows where I'm just playing with me, my guitar, or with my band," Barrett said. "And so, you know, I attribute that to not only being coached by a guy like Blake Shelton but, you know, working around the clock, you know, for weeks at a time on singing a song and really dialing in a minute-and-a-half of one song and really focusing on every line and giving every single note its opportunity to shine. And that's not necessarily something that I would have done before this process.

"And so now, I have taken what I've learned in this scenario, you know, singing other people's songs and transfer that over to my own live show that's, you know, full of original music. And I have been able to tell right away that, from a growth standpoint, it has happened; it will continue to happen. And I'm excited about that, about taking that and using it in the future as I continue to pursue a career in music.

"From a personality standpoint, you know, Blake didn't really give me a lot of coaching on personality and stage presence. I have always been the kind of person that, for whatever reason, when it's time to go out and sing and perform, that there's just some sort of switch in my head or in my heart even that just sort of flips and I sort of lose myself in a moment.

"And so, you know, I guess that shines through even more on a massive stage like 'The Voice' stage, you know, when you know that there's literally millions of people that are going to be watching that performance. For me, it sort of intensifies the feeling that I get when I play regular shows around my hometown in that I just turn it loose and I don't even think about how I move or what my face looks like or any of those things. I just let it be. And luckily for me that, I guess, appears pretty natural and seems like a likeable thing.

"And so I'm going to continue to do that, but will certainly, you know, look at personality and take this - take the things that I've learned here from participating on 'The Voice' and transfer them over to future gigs that don't involve the show.

"So it has been a fantastic experience for me in both regards as far as learning stuff and then understanding how much personality means as far as an audience endearing themselves to you."

Keith defeated Manny Cabo in a "Battle" of "Baba O'Riley."

In true rock star fashion, Keith romped around the stage and got in the face of the coaches, who loved every minute of the performance. Blake said, "You're so good," while Pharrell said, "You went above and beyond my expectation." Gwen said Keith was "let out of a cage" and took her breath away.

"Well, I'm pleasantly surprised to find out that I still have plenty to learn, and that's really nice, because I thought, you know, after 17 years I pretty much had learned most of what I needed to learn," Keith said. "But I definitely think my voice is definitely a lot stronger. And a few people have been commenting at my shows here in Chicago that my range has improved and that my just overall sort of technique has improved and sounds better."

He added, "If people are noticing that, that must be a good thing so, I'm happy about that.

"I feel like I'm stronger, I feel like my throat is healthier, and I feel like I can hit notes and hold them. I feel like even my technique has gotten a lot better ... doing runs and licks and stuff, so I'm very happy with that."

Visit the Entertainment Page for more articles on "The Voice.