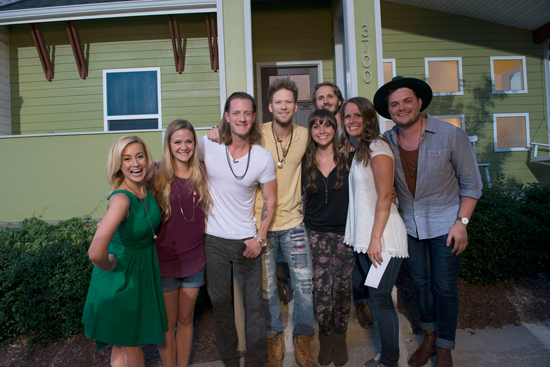 You never know who'll show up at your doorstep with a camera crew and big-ticket prizes in hand.

Ryan Seacrest and FOX have teamed up to give back to unsuspecting, in-need and deserving people around the country. They've incorporated the likes of Kellie Pickler, Ross Matthews, Common, David Beckham, Justin Bieber and Ariana Grande to visit neighborhoods and "Knock Knock Live."

"Well, first of all, anything can happen," Pickler said in a phone interview with BTS and friends. "So, there are games. There are prizes to be won. And each game will be a little different than the last. And, yes, anything can happen. We could show up and surprise you with your favorite celebrity, or if there's a dream wish of yours that we can fulfill, then that's what we're here to do."

In last week's premiere episode, Pickler, a country music superstar, was in Nashville to surprise three girls who hope to become recording artists. Pickler knocked on their door, found out a little bit about their dream, and then presented each with $5,000.

She also introduced them to Florida Georgia Line. Brian Kelley and Tyler Hubbard presented the girls and two guy friends with T-shirts and an invitation to join them on a musical cruise to Mexico.

"It's all about making dreams come true, and I'm really excited to be a part of something so special and just something positive," Pickler said. "I think that television needs that right now. We need a bright light on television and this show is such a beautiful thing to be a part of, and we just get to make people smile. We get to make their day. So, I'm looking forward to that."

Each week, Seacrest and his co-hosts (including Pickler) will team with a "who's who" of celebrities to reward those who give back to their community, work to benefit their neighborhoods or have endured a challenge of some sort.

"My job is to, hopefully, knock on the right door and, hopefully, they answer the door," Pickler said. "If they don't, I might have to go knock on someone else's door and give their prize to them (laughs)!

"You know what? This being live is a little scary, but I think it's what makes it even more exciting. Bottom line is we are trying to help peoples' dreams become a reality, and I'm excited to be a part of that process. And I just get to show up and knock on peoples' doors and deliver good news, so I'm all about that.

"I think television needs - it needs some bright lights. It needs to be - we need some feel-good shows out there, and it's nice to be a part of things that matter. And what better way to just make your day and everyone else's day (than) by surprising someone with good news?"

Pickler won America's heart with her southern charm on the fifth season of "American Idol." She went on to create hit albums "Small Town Girl" and "100 Proof," while freestyling her way to the Mirrorball Trophy on the 2013 season of "Dancing with the Stars."

She is no stranger to giving back. Most famously, Pickler shaved her head to bring comfort to a dear friend, Summer Miller, who was fighting breast cancer. She also has given time and talent to St. Jude Children's Research Hospital, Boys & Girls Clubs of America, the American Cancer Society and the Wounded Warrior Project.