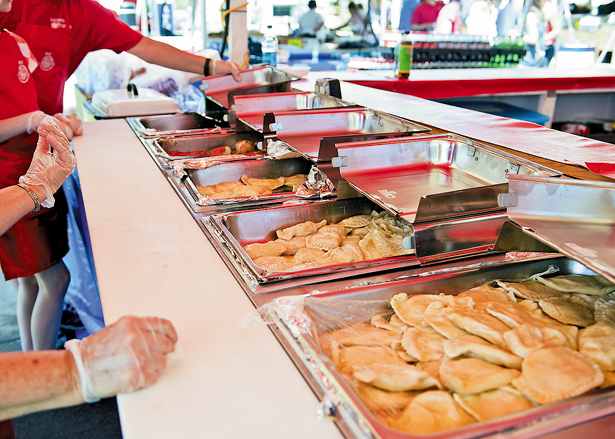 Pierogi are shown at the Our Lady of Czestochowa Parish concessions tent at Canal Fest.

A lot of work goes into that Polish platter

For visitors to the Canal Fest of the Tonawandas, the most strenuous part of getting that Polish platter at the Our Lady of Czestochowa Parish tent is waiting in the inevitable line of hungry festivalgoers.

But behind the scenes, a flurry of activity goes on, not just at the tent itself, but at the parish hall on NT's Center Avenue - and before that, going back weeks and months to prepare the homemade food that's sold there.

On Tuesday morning, at the hall where the food is prepared, a sign on the door noted "Pierogi sold out until end of Sept." Inside, the distinctive scent of sauerkraut filled the air as workers hustled to get everything ready for the day's first batch of festival food.

John Cacicia, morning supervisor of the kitchen crew, arrives at 7:30 a.m. any given day during Canal Fest.

"I get the pots and pans ready, heat the water for sausage," he said. "I go to Budwey's and pick up the bread, pick up the beef."

By 8:30 a.m., about 10 workers stirred sauerkraut, prepared pierogi and joked around before the rush started. People work in shifts all day to make sure there's food ready to take to the tent, where another group of workers waits to serve Canal Fest patrons.

"Right now, everybody is in the mode of getting ready for the 11 o'clock send-off," said Cacicia, whose wife, Sharon, works a later shift in the kitchen. (In fact, they've spent their last two wedding anniversaries working Canal Fest - but not the same shift.)

"This is what we do, all day," he said. "It's a lot of fun in the kitchen. A lot of the people here have been here before. They know what to do.

"We always have good people. It just works." 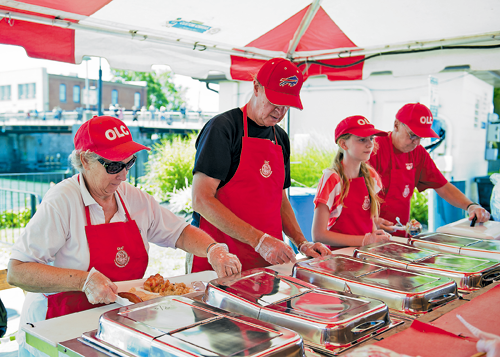 Our Lady of Czestochowa Parish in North Tonawanda runs one of the most popular concessions tents at the Canal Fest of the Tonawandas. From left, Gloria Nowak, Jim Kowalski, Kaila Marazita and John Nowak put together a Polish platter on the opening day of the festival. (Photo by Karen Gioia.)

For as long as there's been a Canal Fest, there's been an OLC tent there. It's tied into the "pierogi ministry," in which members meet every week to make pierogi for sale to benefit the parish.

For about two months, as indicated by the sign on the door, sales have been suspended so the stock can go toward the Canal Fest tent. Donna McCrohan of North Tonawanda, serving as the kitchen manager Tuesday morning, said 17,000 pierogi were made this year for the event. (Last year, the stock of 15,000 was pretty much sold out by Saturday.)

Volunteers started preparing other items about three weeks ago, taking on one big task a day, from chopping 150 pounds of onions to meticulously rolling golabki (cabbage rolls) to preparing sauerkraut (by a secret parish recipe) for 10 hours one day.

"We developed it by talking to the ladies here at the parish ... then we had them taste-test it," McCrohan said of the recipe. "And they liked it. So we figured we'd go with it."

McCrohan said doing the prep work in stages is more manageable for everyone. She showed off the prepared ingredients in the freezer - bags of onion, trays of beef, bins full of golabki, both the rolled and the unrolled "lazy" variety. (And pierogi. Many, many pierogi.)

"On Sunday, this whole thing was full," she said. "It's a beautiful function, but it's a lot of work."

Among those working Tuesday morning were Judy Smolka and Laura Stockburger of North Tonawanda and Marie Fleichman of Wheatfield, who were warming up and brushing pierogi of three different varieties - cheese, potato and cheese and sauerkraut - with butter.

"We enjoy doing this," Smolka said. "We just have a good time together. I think it brings people together."

"It helps promote our traditions, the tradition of our food, which is very, very important," she said.

The tent is a popular one at the festival. According to business manager Ginny Keleher, it brings in about $20,000 annually for the parish, its biggest fundraiser of the year. Many local non-profit organizations rely on the annual festival.

"It builds community, too," she said.

By 11 a.m., multiple trays were ready to be transported over to the festival. It wasn't one of the busier times, although dinner times always are and later Tuesday (parade day) would be particularly crazy, Cacicia said, as are the weekend days of the arts and crafts show.

But for late Tuesday morning, the demand wasn't overwhelming - nor was the traffic or the parking situation, said the driver for the first shift, Vince Kalota of North Tonawanda.

During busier times, he said, the driver on shift might call ahead to the hall and let the workers know what's needed before they even return. "It gets pretty hectic."

Once Kalota found a place to park on Webster Street, he used a wagon to cart the trays full of food over to the OLC tent on Sweeney Street. There, another group of volunteers, including tent manager Rushia Coughenour of Lockport, waited to move on to the next step - the business of taking care of the expected steady stream of customers.

"We have wonderful people, lots of volunteers," Coughenour said, noting that even the children of the parish help out.

By the time the food was set up and ready to go, about 11:30 a.m., a line of six people had formed. An assembly line of volunteers Judy Prisaznuk, Mary Sattelberg and Ann Samborski (all also members of the parish pierogi ministry) stood ready to deliver menu items including the trademark Polish platter, which features a sausage, two pierogi, one golabki, sauerkraut and a slice of rye bread.

"They are delicious!" Prisaznuk called to the line of waiting customers as she prepared to dish up the first pierogi. "You're going to come back for seconds."

Canal Fest of the Tonawandas runs through July 26. For more information, visit www.canalfest.org. The OLC concessions tent is located on the North Tonawanda side of the festival, on Sweeney Street near Gateway Harbor. Concessions run about noon to 10 p.m. daily during the festival. 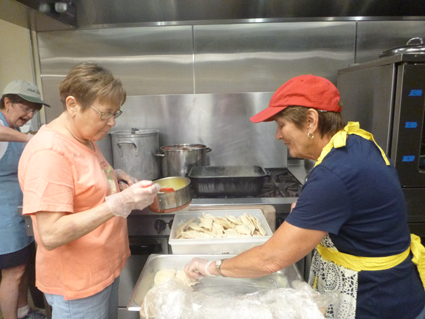 Laura Stockburger and Judy Smolka prepare pierogi at the kitchen at the Our Lady of Czestochowa parish hall in North Tonawanda. 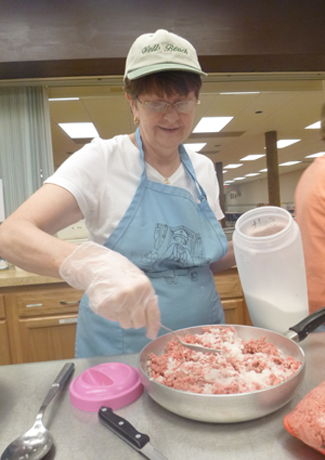 Donna McCrohan seasons ground beef at the kitchen at the Our Lady of Czestochowa parish hall in North Tonawanda.

• 4 to 8 p.m., merchants' sidewalk sale, Main and Broad streets in the City of Tonawanda to Webster and Goundry streets in NT

• 9 a.m. to 5 p.m., flea market operated by the Historical Society of the Tonawandas, Clinton Park, Broad Street, City of Tonawanda

• 11 a.m. to 6 p.m., arts and crafts show, Main and Broad streets in the City of Tonawanda to Webster and Goundry streets in NT