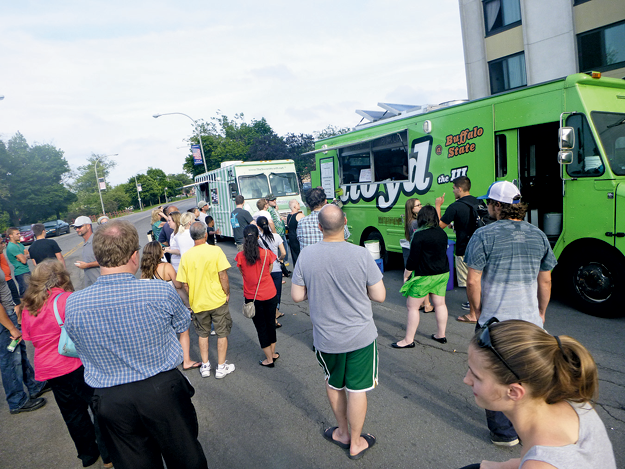 Patrons at the T-NT Gateway Market wait for their food at Lloyd III. The market has been drawing people to the canal with food trucks and artisans. (Photo by Jill Keppeler)

Tonawandas offer a gateway to summer

That big, bright green truck can really pack 'em in.

With all the artisans, musicians and food vendors present for the T-NT Gateway Market last Thursday, the biggest crowd congregated around Lloyd III, the third incarnation of the popular Buffalo-based food truck. Dozens of patrons clustered around the vehicle, waiting patiently despite the crowd for the chance to order tacos, burritos and tricked-out nachos.

And that's exactly how Suzanne Todaro, market organizer, wants it to be.

"It's a mini Larkinville. It's a matter of getting people down here and the more we get the word out, the more people we'll have."

Today marks the fourth week of the market, which will run from 5 to 8 p.m. Thursdays weekly through Oct. 1, with a two-week break July 16 and 23 for Canal Fest. It's sponsored by the NT Downtown Merchants and the Swiftwater Business Association.

Todaro, also the owner of Gleam & Glimmer Stained Glass Studio on Webster Street in North Tonawanda, said the season has started slow, but last year - the first year of the event - was similar.

"I think the first year was very successful," she said. "It was really booming toward the tail end. After Canal Fest, we got going pretty well and it went right into August.

"It's starting to grow right now. I think a lot of people didn't realize we started early." 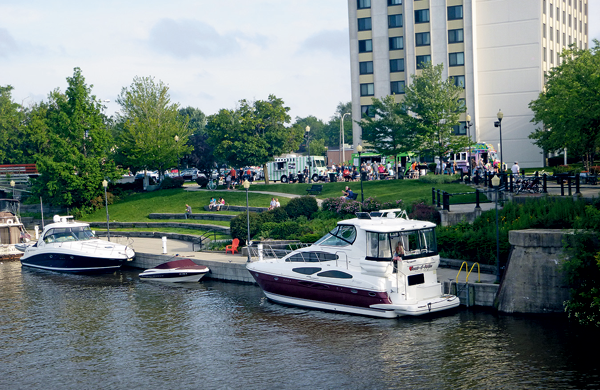 Patrons visit the T-NT Gateway Market. The market has been drawing people to the canal with food trucks and artisans. (Photo by Jill Keppeler)

Nikki Benatovich of East Amherst, owner of Cosmic Lotus Jewelry, echoed Todaro's words. Benatovich has sold her handmade gemstone jewelry at the market since its beginning in spring 2014.

"I like the atmosphere," she said. "People are here to have a good time. And we're all here to work together. You don't find that at a lot of markets. It's kind of nice."

Nearby, Collette Zahm of North Tonawanda, owner of Coco Zahm Creations, organized her own wares: Bright, frothy tutu concoctions for children, as well as jewelry, hair clips and other accessories. She has also taken part since the first market.

"It's small so far, but it can do some good things for our area," she said. "And it's artisans only."

Food truck offerings have varied, but last Thursday's contingent included Lloyd III, Pizza Amore, the Great Foodini, Kona Ice and Sweet Hearth, spread out on both sides of the canal.

Sheri Denormand of North Tonawanda sat at one of the scattered picnic tables, watching the crowd and waiting for her order from Lloyd III.

Ashley Forbes of North Tonawanda, who was visiting the market with her daughter, Alexandra Abramowski, 3, and her grandmother, Sue Maxey, ordered dinner from the Great Foodini truck

Abramowski, meanwhile, was enjoying the music. Each side of the canal has a musical act booked for every week of the market.

"She's all excited by the music. She said she hoped 'the guy with the guitar' would be here again," Maxey said. "She's happy."

The more people visit, whether to patronize the food trucks, listen to the music or browse the artisans' wares, the more likely they are to take a look at what the local merchants have to offer as well, Todaro said. 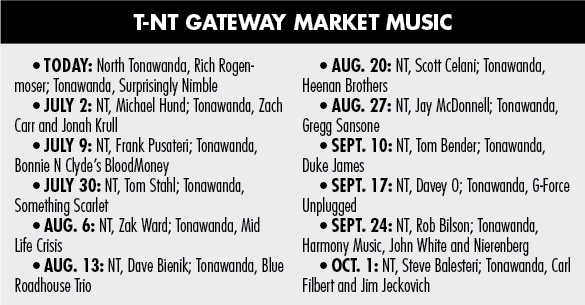