•Taken from the May 8 Island Dispatch

Customers bought up copies of "Images of America: Grand Island" by Gerald Carpenter and June Justice Crawford, published by Arcadia Publishing. The authors were on hand to autograph copies of their 128-page softcover book.

The idea for a book was an idea that has been "floating around the Island for years," said Grand Island Historical Society President Curt Nestark. He said Crawford, a longtime Islander, was "the catalyst behind getting this thing going."

Crawford said a history buff and former resident of Grand Island called Arcadia Publishing to ask why there wasn't a book about Grand Island. The publisher in turn contacted the town supervisor's office.

"So the publisher called Mary Cooke and said, 'We'd be interested in doing one. Would you be interested in having one done?' " Crawford said. Cooke passed the information on to the town's Historic Preservation Advisory Board, on which Crawford serves, who asked if anyone was willing to write a history book.

"And I'm the only one, apparently, crazy enough to agree to write," Crawford joked. She enlisted Carpenter, a retired history professor with whom she worked at Niagara University, to help with the research. The book was two years in the making, Crawford said.

The book signing was a success, with customers visiting the downstairs foyer to meet the authors. Town Historian Jodi Robinson estimated 200 books out of an initial edition of 500 were sold Tuesday.

"It's finally here. The book is out. I bought three copies signed. I'm going to give them out as gifts," Nestark said.

"It's very nice. I love it," Nestark said of the book. "I keep joking with them. When are we going to start working on volume II? And then volume III. There's enough history, enough history over here you could do a whole 'nother volume." 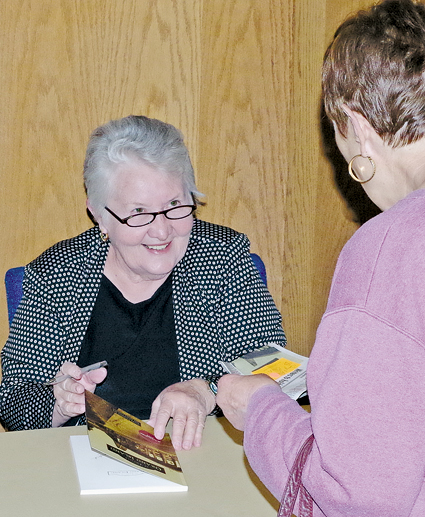 June Crawford signs a copy of her book "Images of America: Grand Island," which she co-authored with Gerald Carpenter, during a book signing Tuesday in Town Hall. (Photo by Larry Austin)