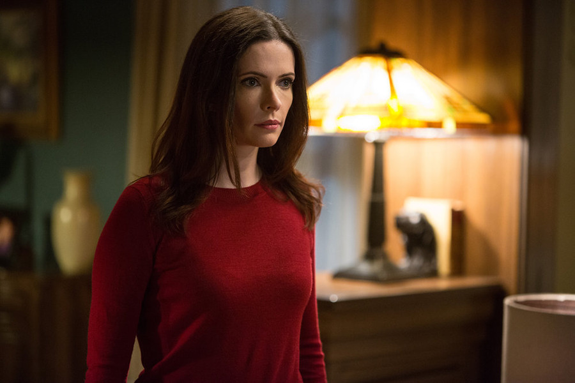 So, yeah, Juliette's a Hexenbiest.

At the end of "Grimm's" last episode in mid-February, Nick (David Giuntoli) came home to find the house a mess and Juliette (Bitsie Tulloch) sitting on the living room coach, sullen and bruised. She had fended off an attack from Adalind (Claire Coffee). This, of course, was right after Nick had come home a few days earlier to find a dead bounty hunter on the floor.

Confused - and concerned - Nick asked what happened. To his surprise - and Juliette's chagrin - she revealed a startling turn of events.

In short, she had become the creature Nick hates most: a Hexenbiest - and a powerful one, at that. Juliette made quick work of both attackers.

Ironically, her newfound powers arrived as she was helping Nick reclaim his Grimm abilities. The couple sought a normal life (as far as normal goes on "Grimm," anyway), yet they realized Nick couldn't fend off wicked Wesen without his inherited strength.

Now, they must figure out what to do with Juliette's mystical muscle.

"It has been such a great storyline, because there's such a push-pull with her," Tulloch said. "Where, you know, at first she really didn't want (abilities). She just wanted to have her normal life back. But now that she's sort of learning how to control the Hexenbiest within, she's realizing just how powerful this makes her.

"And, you know, to an extent, as much as she's been able to contribute to the 'Scooby Squad' as a veterinarian and then also as somebody sort of good with a gun, this is the first time that she has sort of supernatural powers. So it's really the question going back and forth of do I want to be normal again and be with Nick? Or do I want to stay a Hexenbiest, because this is kind of fun. And I think the Hexenbiest are pretty wicked.

"And so she's definitely going to the dark side, and that's the intention. And I think that's really where they're going with the character - at least in the immediate future and for the rest of the season."

It's hasn't been easy for Nick and Juliette since he discovered his Grimm bloodline. Despite his efforts to keep her safe, Juliette has been poisoned, left without memories, taunted by visions, uncontrollably obsessed, accidentally cheated on and nearly killed by an assortment of Wesen. The cherry on top? She's now the same creature as Adalind, her archenemy.

"Well, I think the reason they've stayed together thus far is that there's a lot of love there," Tulloch said. "And, you know, it's been one of the things in both of their lives that, even though it's sort of wreaked a lot of havoc, you know, you always go back to home. And I think he represents home for her, and vice-versa. And they've so far kind of managed to get through everything together, even if it's been tough.

"And so the initial question (is) ... how are they going to handle this, because this is the craziest thing, obviously, they've had to deal with. Because the Hexenbiest are basically - they're mortal enemies of the Grimms. And they just want to kill them and vice-versa, which is why Juliette took so long to tell (Nick) the truth, because she was terrified. Both that he would, you know, have a gut reaction and go after her and kill her. Also that she's, you know, it's been made apparent to her by this point that she's incredibly powerful. You know, more so than Adalind or Renard - who are both Hexenbiest - could ever dream of being. And she doesn't know how to really control it yet.

"So, if he started to attack her and, you know, she morphs into a Hexenbiest, could she kill him? So I think that makes sense.

"But, really, the question going forward, you know, can they live like this or not? And I think she's kind of given up hope, because she looks in the mirror and all she sees is this ugly monster. And she hasn't really embraced it yet. So she's like, 'I can't handle the way that you look at me when I look like this and this is what I am now.' Because, you know, we've tried and, you know, Juliette tried with (Hexenbiest analyst) Henrietta, and there seems to be no cure.

"So that's really the question going forward. But, you know, it's a little bit of - it's almost becoming like a Romeo and Juliet situation. Where, yes, they're in love, but they can't really be together the way it is right now."

Tulloch knows her character inside out and backward four-plus seasons into "Grimm." She can anticipate what Juliette would say or do in many situations.

"Sometimes we know more and we have a little bit of a heads-up. And then sometimes, you know, what I've found with the showrunners, Jim Kouf and David Greenwalt, is that they're really open to ideas and stuff. And it's very much a collaborative process. But a lot of the times stuff changes, because the show moves pretty quickly," she said. "I mean, the episode that's airing (tonight) at 8 p.m., we shot in January. And it's already airing. And they, you know, they go on Facebook. They go on social media. And they see the stuff that the fans really like. And they'll give them more of that. And so the Hexenbiest has been incredibly popular among the fans. And so don't expect that to be going anywhere anytime soon.

"I think sometimes they sort of like seeing the cast reaction to crazy storylines, you know? ... The Hexenbiest thing I didn't know about."

Moving forward, Tulloch promised, "The season finale for this season is the biggest game changer we have ever had. I mean, people will lose their minds. There's going to be, gosh, I don't know what I can say without giving it away other than, yes, we've never done anything this big on the show before. So that's going to really change everything going into season five. And the Juliette-Hexenbiest storyline has a lot to do with that.

"And, you know, the reality is, going forward, you know, you're going to see a lot of the push-pull with psychologically wanting this power. And I think, you know, it adds a really interesting element to the story for her to turn really, really dark."