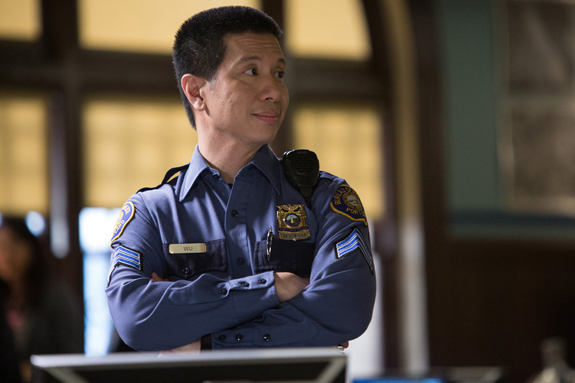 The characters on "Grimm" really need a spa day.

At the start of the season, Portland detective Nick Burkhardt (David Giuntoli) was without his Grimm powers. Adalind (Claire Coffee) had tricked him into believing she was Juliette (Bitsie Tulloch).

The royal family in Europe later imprisoned her as she searched for her daughter (the child's father, PPD Capt. Sean Renard [Sasha Roiz], was shot and left for dead).

Juliette had to deal with Nick's mistake - and, in trying to help him, she turned into a Hexenbiest.

Monroe (Silas Weir Mitchell) and Rosalee (Bree Turner) were packing for a honeymoon when he was kidnapped and nearly burned at the stake.

Suffice to say, each storyline this season has had big consequences - and (understatement, alert) each episode has been intense.

"What I've noticed most about this season, and I believe they set out to do this for this season, was that each character was going to go through something pretty big," actor Reggie Lee said. "The reason I think it's ramped up this season is because that's been the case."

Lee's character, Sgt. Wu, meanwhile, learned he wasn't crazy - that Wesen are real and Nick is a Grimm hunting them down. Wu could believe his eyes: He did see people transform into all sorts of creatures.

Nick, his PPD partner, Hank (Russell Hornsby), and Renard had previously kept Wu in the dark about the Wesen world. Lee wasn't sure if - or how - Wu should be let in on the secret.

"It's been quite a revolution for Wu," he said.

"I could not be happier with the evolution of this character," Lee added. "It's the best time I've had in my life playing a character. I'm pretty damn lucky to have gone through this. They really gave me a beefy, beefy start in season four. It's been great, man."

"I'm excited for what's to come next in this series," he said. 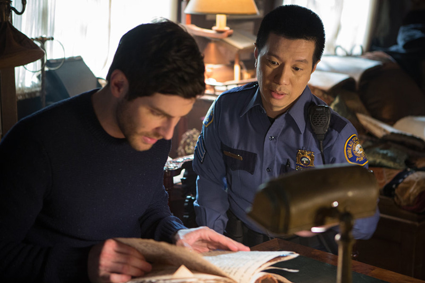 Though "Grimm" could technically be classified as a procedural (albeit one with big mythological weapons and even bigger, monstrous bad guys), Lee said the show has one big advantage over "bad guy of the week" crime-fighting series.

"With this show, (our writers are more) concerned about the characters," he said. "It's such a difference."

So, while "Grimm" has an element of "whodunit," viewers return each week to see what will become of Wu, Nick and company.

"I think that's why people relate to it so much, because it's not just a one-off," Lee said. "Which I think some people do enjoy - they enjoy the 'Wesen of the week.' But at the same time, I think what really pulls them in is the characters and their - interestingly enough - humanity, within this show that has very inhuman characters."

To that end, Lee said fans could expect each character to face more challenges before season's end.

"As far as we've gone this year with emotional turmoil, they're going to take it a notch further," he said.

Oh, and there's a car chase.

"I tell you what: Reading this episode, 17, which I'm sitting down doing homework for now, it's like 'Grimm' meets 'Fast and the Furious,' " Lee said. "It is like adrenaline. It's crazy. I was talking to Jim Kouf about it, who is one of our creators, and he comes from the movies - he comes from the movie world. So what he basically writes is mini-features. And they are. This is like a movie."

Lee is known for doing his homework. His hard work has paid off with a larger role on "Grimm."

"I've always impressed upon younger actors that work pays off," he said. "Do your homework. It's not about the work that you do when you're on set; it's the work that you do off set that gets you on set and gives you freedom to play, and feel, and to be vulnerable, and be in the moment."

"Even though I've got, like, you know, 12 hours on set, I'll still use another four hours of the day to do homework," Lee said. "It pays off."

He credits "Grimm's" creative team for making him a better student.

"That's the biggest gift that I've learned from this entire experience - this four years - is I now trust myself as an actor," Lee said. "That's not to say, 'Oh, I've completely hit the pinnacle.' Because I don't think you ever do. ... There's no such thing as perfection. There's always deeper. There's always more nuanced. There's always more of life to live that gives you more facets to play within a character."

"Whether it's saying two lines as a cop in earlier episodes or whether I've got a beefy, huge episode where I'm in almost every scene, I will do the same amount of homework," he added. "I will work the same amount of hours in a day. Because I don't think I can ever experience 15 to 20 years of being a cop, even if I sit down for eight hours a day."

Lee and his co-stars did take a break last month to participate in the first "Grimm Gives" gala event and online memorabilia auction.

The funds will go to the "Grimmster Endowment" for OHSU Doernbecher Children's Hospital in Oregon.

"To be in that position to give back to a community that's given so much to us was a pretty awesome, awesome feeling," Lee said.