In the photos: Megan Boone, left, as Elizabeth Keen on "The Blacklist" (NBC photo by David Giesbrecht). Jennifer Garner at the 2010 Toronto International Film Festival (photo by Josh Jensen of Toronto)

12 similarities between Super Bowl lead-outs 'Alias' and 'The Blacklist'

Each episode of "The Blacklist" begins with a number. So here's one to start off this article: 12.

This is, of course, the number Tom Brady will wear as he looks to become just the third quarterback in NFL history to win four Super Bowls. It's also the number of backup footballs his New England Patriots used in the first half of the team's recent AFC Championship Game victory over the Indianapolis Colts (11 of which, of course, were underinflated).

Tomorrow night, NBC will give its post-Super Bowl timeslot to "The Blacklist." ABC, 12 years ago, awarded its big-game "prime time" to another action-packed government conspiracy series.

That got us thinking.

1. Both revolve around a strong-willed, strong-armed female

It wasn't long after Sydney entered the agency she found herself embroiled in fail-and-the-world-will-end scenarios. Lizzie was met by a team of unhappy agents waiting outside her apartment on day one.

3. Each woman has a big puzzle on her hands

4. Both female characters have father fatigue

Sydney's father, Jack (Victor Garber), also a CIA agent, was estranged for many years as he tried to protect her from his agency, and from Sloan. Lizzie's adopted father, Sam (William Sadler), had a previous relationship with "Red." To what end, we don't know.

5. Both leave viewers asking, 'Who's your daddy?'

At one point, Sydney had to entertain the idea Sloan was her biological father. Lizzie thinks "Red" might be her father, even though he's denied it.

6. Both Syd and Lizzie are hell-bent on finding answers

No doubt the result of family upbringing, both female characters are bound and determined (and sometimes costumed) in their pursuit of the truth. Sydney would pretend to be any character, climb any mountain or wear any wig to advance her cause. Lizzie kidnapped Tom (Ryan Eggold), the man who pretended to be her loving husband, and kept him locked away on a boat for months.

7. Both shows opted to go with a newcomer to head the acting team

Garner was relatively unknown when landing the "Alias" gig. Boone, likewise, was far from a household name when cast as Keen.

8. Both shows cast a veteran actor to be the backbone

"Alias" gave Garner plenty of backup with stage and screen veterans Garber and Rifkin. "The Blacklist" paired Boone with Spader, an iconic actor with plenty of awards and a starring role in what will be 2015's highest-grossing film, "The Avengers: Age of Ultron."

"Alias" had a strong core cast of actors that was made stronger by the addition of talented guest stars seamlessly woven into each storyline. Some were A-list in name, but most were A-list in talent (think Lena Olin, Melissa George, David Anders, Gina Torres).

The same can be said of "The Blacklist," where guest stars Alan Alda, Mary-Louise Parker, Lance Reddick, Paul Reubens and Peter Stormare have deftly played characters with questionable motives.

John Eisendrath was an executive producer on "Alias" a decade before landing the same job on "The Blacklist."

11. Both used the Super Bowl to change direction

"Alias" offered its biggest reveals in the Super Bowl episode, thereby changing the course of the show for the duration of its existence. "The Blacklist" is now headed in a different direction, having resolved the "Berlin" storyline in the previous episode.

12. Both networks figured the Super Bowl high would last till Thursday

In a weekend where numbers rule (Which team will score the most points? Which pizzeria will sell the most pies?), "The Blacklist" will look to capitalize on its special lead-in, the Super Bowl, which will attract more TV viewers than anything else on the air this year. A two-part episode will continue Thursday, when "The Blacklist" debuts in its new timeslot (9 p.m.).

The series had been a Monday staple, but NBC is looking to reclaim a night it once owned with comedies like "Cheers" and "Seinfeld."

ABC didn't move "Alias" to Thursday night until its fifth season, but did so thinking it, too, could carve out a larger portion of the week's most profitable night for commercials.

Ultimately, if there's one main similarity between "Alias" and "The Blacklist," it's that one was and one is lucky enough to have top writers and showrunners behind the scenes directing an overabundance of acting riches.

"Alias" was an intriguing, exhilarating, can't-miss-an-episode series truly worth watching. 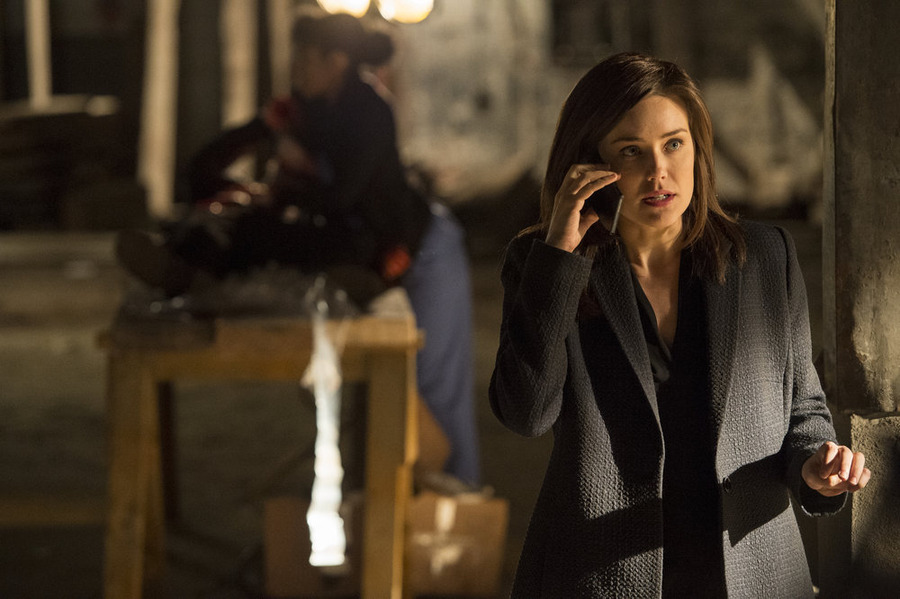 Megan Boone as Elizabeth Keen on "The Blacklist" (NBC photo by David Giesbrecht).