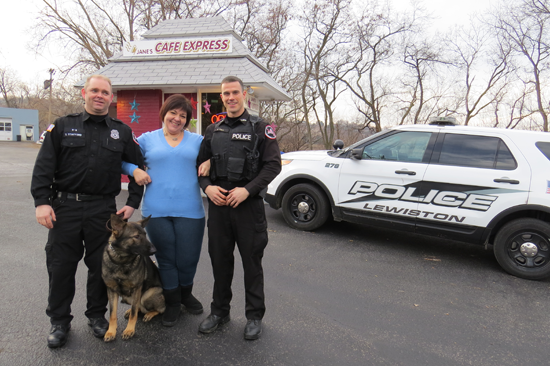 Patrons at Jane's Café Express in the Village of Lewiston have noticed a unique offering. The "Bran-Dar Special" is a basic egg sandwich (egg, cheese, bacon or sausage on a roll) with an extra ingredient - typically another egg.

One day, "Scott Stafford pulled up, and he said, 'I need a sandwich.' And I handed him his sandwich, and he said, 'Oh, that's right. I need one for Brandon,' " Kusmierz said. "And I said, 'Oh, hang on. He gets a special one.' And I went in and I made him the sandwich, and he looked at me, and he goes, 'This is the special one?' And I said, 'Oh, yeah.' I never thought twice about it. I always just made Brandon a bigger a sandwich."

"So, the next day, he pulls up - Scott again - and he says to me, 'I'll take two of those "Radar Specials" that you make.' And I said, 'What?' And I knew what he meant. I said, 'Oh, so you want two extra eggs.' And he said, 'Yeah, we're going to call that the "Radar Special." ' Well, then Brandon heard that we were going to call it the 'Radar Special,' because Scott took a big marker and wrote it on my front board. And then Brandon pulled up and he said, 'Oh, no. It's got to be "The Brandon." I thought of it.' And they kept going back and forth, and people were writing things on the board. They would scratch out the 'Radar Special,' and one customer wrote 'The Brandon.' That's how it came about."

"It was friendly kidding back and forth," Stafford said.

"I wanted one more egg to it. I just like eggs," Hall said. "So one day I just asked her if she could put an extra egg in there, and she said, 'Sure.' It just started kind of going."

He wanted to call it "The Hall Good." She kept calling it "The Brandon."

"Scott and I started having a little battle, because he wanted to call it 'The Radar,' " Hall said.

The LPD partners would take turns buying breakfast. When Stafford picked up the sandwiches, the bag would read "The Radar." If Hall appeared at the pickup window, the to-go order was titled "The Brandon."

Ultimately, Kusmierz decided to name the sandwich after Hall and Radar.

"They know I support the Lewiston Police Department very strongly," Kusmierz said. "I see about six of them a day. I love them all."

Of the sandwich partly named after him, Hall said, "It's just a good breakfast sandwich. It's probably the best around."

Jane's Café Express is located at 103 Portage Road (Hibbard's plaza). Its hours of operation are 6 until 11 a.m. (or until the rolls run out) Monday through Saturday.