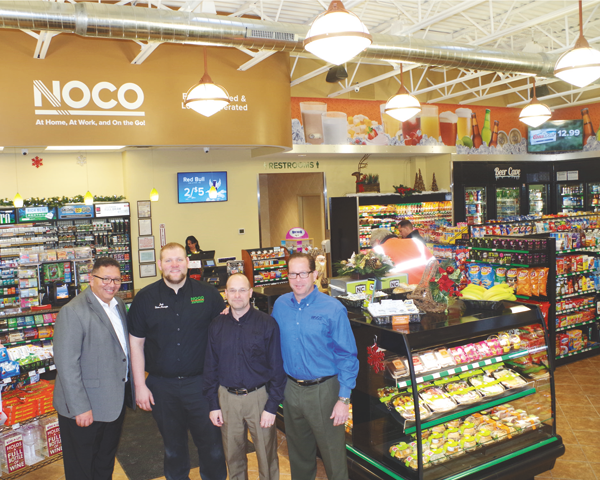 •Taken from the Dec. 12 Island Dispatch

Demolition of the NOCO kiosk at the intersection of Grand Island Boulevard and Whitehaven Road is nearly complete, and its bigger replacement is open for business.

The operative word is "more" for the newly rebuilt store at 1898 Whitehaven Road. NOCO officials visited the site Tuesday and said the store offers more of everything at the intersection with the highest traffic count on the Island.

Jim DeFilippis, NOCO general manager, said the new store is easier to shop in and has an estimated 65 percent more beverages and variety, with offerings they couldn't fit in the old kiosk.

"We had a store that was doing extremely well and the customers were very loyal to it, but we felt we weren't giving everything to the community that we could offer," DeFilippis said.

The new NOCO Express has:

•More access, open 24 hours a day and with free Wi-Fi.

•Twice as many workers, as NOCO doubled its workforce on the Island by hiring six new employees for the store, which is one of 37 that NOCO operates in Western New York.

•A quick-serve restaurant partner in U-Swirl Frozen Yogurt. U-Swirl manager Norm Hoffman's mother worked on the Island, so he's familiar with the intersection. He said the location is ideal, and the U-Swirl will give Islanders more as well, in terms of choice. "It's actually pretty nice because it's another option for families," Hoffman said.

The only thing that the new NOCO has less of is claustrophobia. The old kiosk was 950 square feet in size, while the new store is 4,000 square feet.

Mike Newman, NOCO executive vice president, is the third generation in his family to head the NOCO brand. He said he loves the transition and the reception the NOCO Express concept has received.

As DeFilippis said, customers are more apt to come inside the store when there are more choices than just snacks and pop.

"I just kind of laugh. This store was a beer and cigarette store when my dad built it," Newman said, "and now it's become something quite different." With work almost complete, Newman can't wait to say hello again to GI patrons.

"We're excited to welcome back the Grand Island customers. I think they've been very patient," Newman said. "It's a close-knit family out here and we're looking to be ready for them."