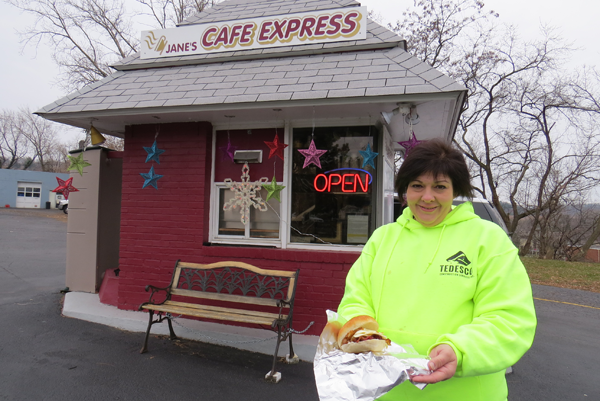 Getting to know Jane's Café Express

(Because, apparently, I'm the only one who doesn't know about it)

I find there are two types of business owners in the Village of Lewiston.

The first type is relaxed - easy-going and forgiving, which is great, because sometimes reporters make mistakes (shocking, I know). The other type would just as soon tar and feather you if you look at them funny.

Her eatery was left out of my Sentinel series "Best Breakfast USA," which ran in May.

"I always said, 'If I ever meet that guy, I'm going to tell him, "You did a story on the (10 Mile Garage Sale) day, and you did all these places to go have breakfast. And you want to know something? I sold out so fast that day you cannot imagine," ' Jane tells me when we meet Saturday morning of the Christmas Walk.

She isn't angry when she confronts me about my omission. In fact, she laughs.

"I just wanted you to know," she says.

As it turns out, her café was exceedingly busy that day.

"This was the place to be, and every local knew it," Jane says.

Well, every local except this one.

"I bought two extra dozen rolls that morning, and I had a very, very good day," Jane says.

It turns out, Lewiston residents have quietly, and steadfastly, made Jane's Café Express a rousing success. In my 30 minutes with Jane, she has nine cars pull up for breakfast - mostly breakfast sandwiches and coffee.

"It's good sandwiches," he says. "Probably one of the best, if not the best sandwich in the area."

Jane starts with DiCamillo Bakery rolls ("They make me special rolls," she says), eggs, and bacon from her neighbor, The Natural Link ("The best bacon there is," she points out). Each sandwich is topped with cheese. Some folks prefer a sausage patty. Sometimes Jane offers hash browns.

You want a cappuccino? She'll give you directions to The Orange Cat.

"It's so simple here and easy," Jane says. "And the menu - I mean, did you ever see such a tiny menu? I've only seen in a movie one time a smaller menu. 'My Cousin Vinny.' And you open it up, and it said, 'breakfast, lunch and dinner.' That was the menu."

She refers to the size of her café, which used to house a photo-processing unit. It's about as big as your coat closet.

But don't let that stop you from visiting.

Though her business is tiny in stature, Jane's personality is larger than life.

"What I like about the place is the service there," Stafford says. "Jane's, obviously, always friendly with us. Always laughing and joking. It's that personal hometown feel."

His partner, Officer Brandon Hall, says, "She's just very personable. She just has that personality. She wants to see people happy. She just has peoples' good intentions. ... It's just good to see somebody that you know in the morning just to kind of start your day off right."

"I see the same people every morning zip through," Jane says. "They don't even have to tell me who they are. If I see them in line, and I'm waiting on this customer, and I'm making this customer a sandwich, and I see Bob out there, I'll pop out his coffee and run it (to him). It doesn't matter if it's a blizzard; if it's raining; I walk it out to them."

Jane knows her customers' names and menu orders, and sometimes she goes so far as to feed them their breakfast.

"I have a couple families - the one mother pulls up. She opens the back door of the van, and I, basically, open all the sandwiches. I'm popping open the juices. And she's putting her makeup on," Jane says. "It's just like a little family thing here."

Toward the end of our meeting, more customers arrive.

One woman just about finishes her coffee order when Jane says, "Three creams. I know."

A man pulls up with a dog. He wants coffee. His companion?

Another man pulls up for a breakfast sandwich and a large coffee. Jane engages him in a conversation about big, black trucks. His Chevy Silverado has a crack in the front window. She prefers her Dodge Ram.

"You write for the Sentinel?" he asks. "Yes," I respond. "You doing another breakfast piece?" he wonders. Once again, I respond, "Yes." "Right on," he says. "You missed her the last time around."

"I did, and that was my fault, I've learned here this morning," I reply.

Jane's Café Express is located at 103 Portage Road (Hibbard's plaza). Its hours of operation are 6 until 11 a.m. Monday through Saturday.