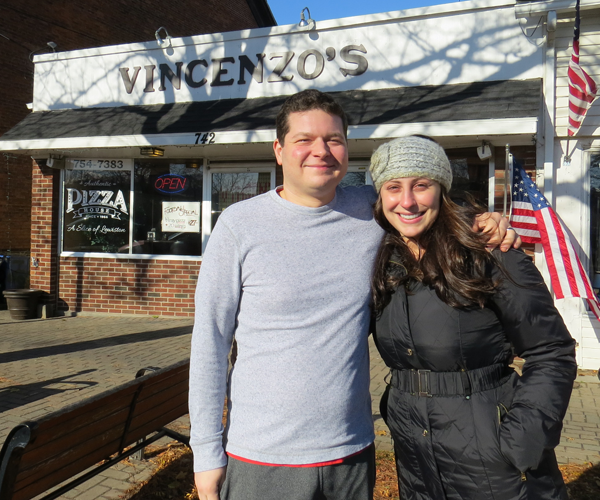 Dad is prepping the turkey. Mom is making the stuffing. Grandma is working on the mashed potatoes. Mary is preparing to shop for "Black Friday" deals while Suzie is headed to the airport to surprise Tony. Your neighbors are decorating for the holidays, and your friends are stocking their stores' shelves with "Small Business Saturday" specials.

What do all of these people have in common?

They'll all order pizza the day before or the day after Thanksgiving.

Heck, one or more will probably deep-fry the bird into an unrecognizable mess and scrap the side dishes for some cheese and pepperoni on Thursday, too.

Next week is one of the busiest times of the year for pizzerias. Turkey Day Eve ranks right up there with Super Bowl Sunday as the prime time to purchase pies. National chains such as Pizza Hut and Domino's each will sell more than 1 million large pizzas on Wednesday.

Locally, Lewiston's plethora of pizzerias will be open and serving slices.

One, in particular, invites readers to skip the, dare we say, generic box-store brands in favor of its from-scratch family recipes.

"Our pizza's so much different (than everyone else)," owner David Munzi said. "Nothing's, like, sitting in a cooler all day or anything. When you call, I make the pizza. Roll it out. Everything. The dough is made a few hours before you eat it."

"It is good," a customer listening to our conversation said as he walked by us. Just a few minutes prior, he had bought three slices.

"I think just our recipe, in general, being different, is what's kept it going, really," Munzi said.

His wife, Sarina, Morreale's granddaughter, said, "Everything ... is made from scratch. I feel like that's how we're different."

"(We're) grinding our own cheese," he said. "Everything's fresh."

"It's not just like we're buying bags of cheese in the store," she said. "The sauce is freshly made. It's not just slapping a can."

"We want to keep it the same as it always was," he said.

"And to be different than the other pizzerias," she said.

Why is that important? Because, save a short period when the pizzeria changed hands, Vincenzo's has been a Lewiston staple since long before the Munzis were born.

At the end of "pizza week," the Munzis intend to reward their customers for a whole year's worth of business. Next Saturday, they'll launch "Vincenzo's Sub Club."

"We're going to have loyalty cards where, if you buy 10 large subs, you get one free," he said.

In a village with a half-dozen well-known, well-liked pizzerias, the Munzis said they're grateful patrons pick their pizza.

"It's been a challenge to try to live up to the original Vincenzo's," she said. "But people seem to love it and think it's the same."

"We've been getting really good response," she noted.

Since reopening, Vincenzo's has added gluten-free items to its menu, as well as soups, sandwiches and, yes, chicken wings. 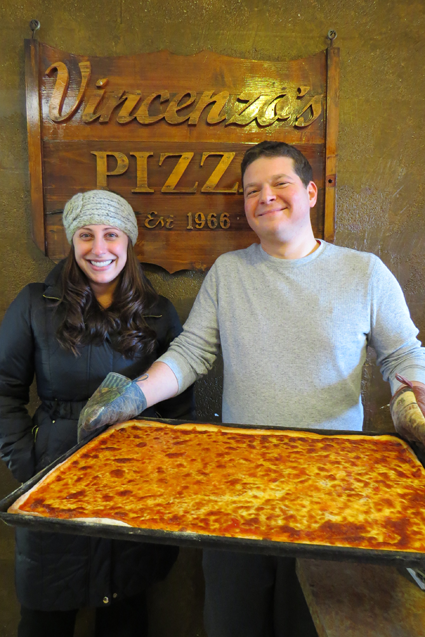