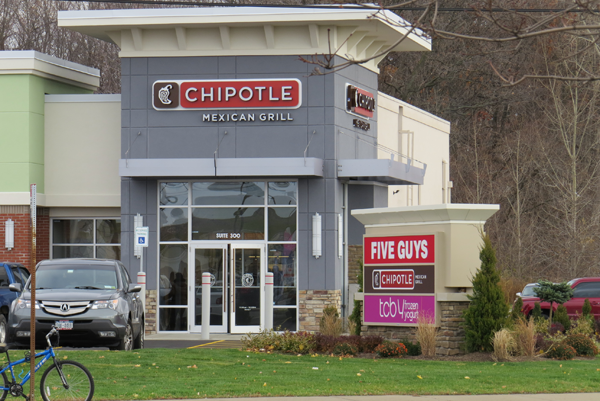 The company also is making headlines in Colorado, but for its values instead of its food.

"Fundamentally, we believe that people have a right to know what's in the food they eat," Ells said.

The company's endorsement of Proposition 105 in Colorado is the most recent in a series of moves made by Chipotle in an effort to promote GMO labeling. In a statement released in September 2013, the restaurant chain encouraged Washington State residents to vote "yes" on I-522, a similar GMO labeling initiative. In the same press release, it stated, "In March 2013, Chipotle became the first national restaurant company to label its GMO ingredients."

The World Health Organization defines genetically modified foods as being "derived from organisms whose genetic material (DNA) has been modified in a way that does not occur naturally." While no research has shown GMOs are harmful to humans, more than 70 percent of Americans say they would prefer not to have GMOs in their food, according to a recent survey by Consumer Reports National Research Center.

"GMOs are much more regulated in much of the world than they are here, and there is still a lot to be learned about the potential impacts of GMO use," Chipotle Communications Director Chris Arnold said. "Until all of that is settled, we'd simply rather not have GMO ingredients in our food, so we are working to remove them. In the meantime, we have been voluntarily labeling GMOs in the ingredients we use, because we believe that people have a right to know what's in their food. That's the same motivation that led us to endorse ballot initiatives that would require GMO labeling."

Chipotle has distinguished itself from other fast food chains offering Mexican cuisine by placing an importance on what the eatery's website describes as "respect for the animals, the environment and the farmers" involved in making the food. A visit to the company website provides consumers not only with information regarding which ingredients are made from genetically modified sources, but which foods are locally sourced, organic, and relating to other health concerns, as well.

The website states: "Our goal is to eliminate GMOs from Chipotle's ingredients, and we're working hard to meet this challenge." It goes on to specify the only GMO ingredients currently used appear in the forms of corn and soy.

Erick Braham, a junior at Niagara University, said, although GMOs are not a major concern of his, Chipotle's efforts made him feel as though the restaurant cares about the food it serves.

"When I see they're providing a GMO-free option, or a vegan option ... it shows that they take care and most likely have higher quality food in general," he said.

In light of Chipotle's endorsement, organizations supporting Proposition 105 have acknowledged the strides made by the company that are in keeping with its values.

Larry Cooper of Right to Know Colorado, Yes on 105, echoed this sentiment, stating, "Chipotle is an important company in Colorado, and they're standing up and saying, 'You're right. Consumers should know what's in their food.' "