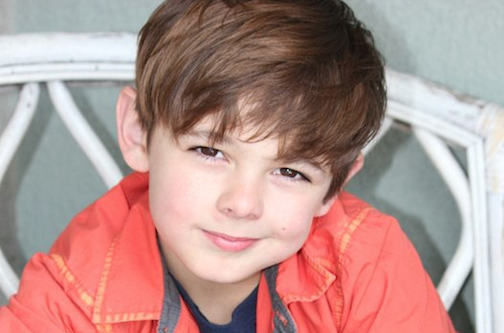 In just three years, Max Charles has appeared in the Sony action blockbuster "The Amazing Spider-Man," lived next door to aliens on ABC's "The Neighbors," voiced Sherman in the DreamWorks animated film "Mr. Peabody & Sherman," and shared the screen with John Constantine in NBC's new Friday night sci-fi series.

You might think an actor with this type of versatility would be seasoned, experienced ... older than 11. But Max has accomplished all this and more while in middle school.

Max was living with his family in Tennessee when his brother, Logan, received a call to audition in L.A. Though Max was only 5 at the time, he wanted to perform, too. Max realized this line of work would be fun to try. He begged his mother for a chance to audition and, before long, found himself in demand as both a character actor and voiceover star.

"They're different," Max said in a recent phone interview. "I like doing both pretty equal. ... (With voice acting) you're not in front of the camera and you don't have to worry about your hair and that other stuff. It's really fun to do voice, and then on-camera is really fun, also. I like going and seeing everybody on set. And working in front of the camera is just really fun for me."

To date, Max has more than 25 credits to his name. His biggest role, so far, was voicing Sherman, Mr. Peabody's curious, time-traveling adopted son.

"It was awesome," he said. "I did the voice for about two-and-a-half years. It was really cool."

Max laughed as he recalled his first encounter with co-star Ty Burrell, who voiced Mr. Peabody.

Max appeared as a young Peter Parker in both "The Amazing Spider-Man" and "The Amazing Spider-Man 2." Both films were box office smashes, and Max's contribution was seen by millions of people around the world. While that might seem cool to an adult, what made Max's day was having the chance to work with his choice costumed conqueror.

"Yeah, I was a big Spider-Man fan," he said. "Spider-Man has always been my favorite superhero. I was actually Spider-Man when I was about 2 or 3 for Halloween. I've always liked Spider-Man as my favorite."

Appearing on screen in big-budget productions has enabled Max to work with A-list actors, including Andrew Garfield, Emma Stone, Tiffani Thiessen, Jim Parsons and Bradley Cooper. He said the advice they've given him as he continues in this profession is "be yourself."

"Working with them and seeing how they work and just seeing what they do is just really cool," Max said.

He recently filmed an episode of "Constantine" in which he plays Henry, a young man in need of the title character's help. Max said the show offers "a lot of scariness, a lot of creepiness, and a lot of action."

If you think that last statement gives his family pause, think again.

Max is lending his vocal skills to NBC's animated "Elf: Buddy's Musical Christmas," which debuts next month. He then can be seen in the Clint Eastwood-directed Navy S.E.A.L film "American Sniper," which hits theaters in January.