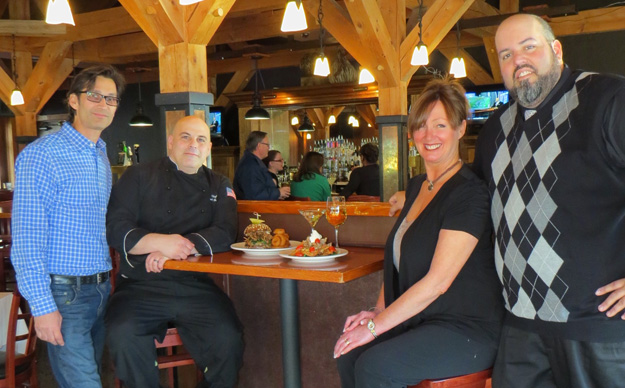 SideBar an extension of one's living room ... but with better food

The River SideBar will take center stage Thursday as Water Street Landing celebrates its 10th anniversary with tasty new changes to the casual end of the restaurant.

From 5-9 p.m., guests can sample custom sodas and complimentary items from the new SideBar menu while exploring the room's new digs.

"This is kind of a way of saying, 'Come in as though you've never been in here before,' " owner Jon DiBernardo said. "The 10-year anniversary is going to be a year-long celebration, but the SideBar is going to have a party every year when we get ready for the SideBar week."

This party is open to everyone - and there's no cost to attend.

"We're inviting our guests - the people that have supported us," DiBernardo said. "People that think they want to be our guests, come on down and get an invitation.

"What we're doing is we will have a little bit of a packet waiting for you when you arrive. It'll have some tickets for samples."

"We're going to give numerous opportunities to sample," he said. "You're going to be able to choose what you want. At the end, we're going to probably ask people to rate which ones they like the best. And we'll probably do a little bit of a raffle. We're going to have some fun."

"Fun" is a key word for DiBernardo, who strives to provide a good time for his patrons.

"When the guests come in here, I look at it this way: It's going to be a place for adults to misbehave and kids to behave."

SideBar hostess and unofficial "den mom" Jayne Anderson said, "I believe that it's going to be a warm place that Lewiston is used to and accustomed to coming to. Obviously we have a water view that is second to nothing in Western New York. (The SideBar) has a lot of class and feel to it, and (is) where you can enjoy a game in a grown-up, classy atmosphere - and with a lot of warmth, where people are going to know who you are."

"People are very welcome here," she said. "I want them to know that." 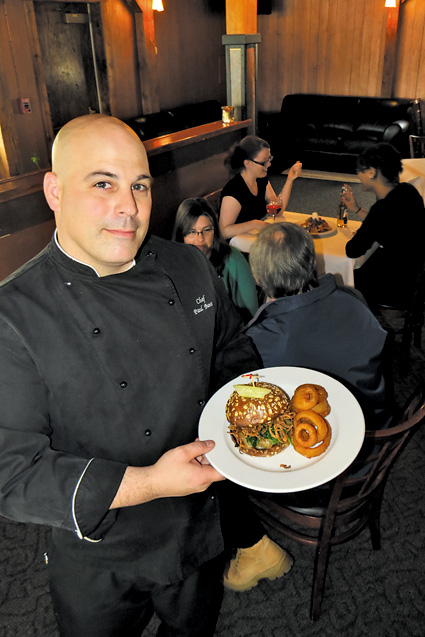 "We've also upgraded our menu to a caliber that there's different items on there," Anderson said. "You'll still find some of the old favorite dishes that people have come to love here, but we've raised the level for the first time in a few years. We've changed everything so that there's a wide variety of different flavors and arrays to taste in a beautiful, lodge-like atmosphere that they can enjoy a game or a fine-dining meal and be comfortable at whatever they choose or desire to do."

"We want this to be our casual fare," DiBernardo said. "It's going to have some healthy options and some casual options. We're still going to have our famous wing night, which is big during the offseason. Our fish fry, of course. ... But we're going to have a gingersnap salmon (for example). It's going to be priced casually." Other new items include a ghost pepper cheeseburger and duck nachos.

Water Street Landing prides itself on having a top-notch culinary team.

"A lot of places have cooks. I have two great chefs, and actually have two sous-chefs," DiBernardo said. "We're overstaffed, because that's what we need to run this place during the summer. So during the winter, we're fortunate enough to use those people so that, when you come here, I always like to say, 'The $6.99 fish fry is being cooked by the same hands that are going to do the filet mignon.' "

"When you have a chef, you can offer a menu that appears large, but it's managed properly ... through proper menu design," he said. "So you might see duck on the menu, which people say, 'Well, how much duck can you sell?' Well, we sell a lot of it during the winter season, because of the way we construct our menu."

The SideBar, DiBernardo said, is "going to have that total casual menu experience, and we're really excited about bringing it all together."

Of course, Waster Street Landing has earned rave reviews for its dining room, too. Guests often eat in the more upscale side of the restaurant to take advantage of its menu. Now, they can order those signature dishes inside the SideBar.

"You still want the surf-n-turf and the steak and the higher-end dining experience, you can still have those items in this atmosphere. It's going to be adding a level of casualness that the dining room doesn't offer," DiBernardo said.

That level of comfort will govern the SideBar's menu.

One of the new items will be "Grilled chicken and Andouille sausage with grainy mustard and an apple slaw, roasted red pepper spread on a brioche bun," DiBernardo said. "It sounds fancy. It sounds gourmet. ... It's stick-to-your-ribs. It's not something that you say, 'Oh, no; I don't go there.' It's going to be called a chicken and sausage sandwich. All right? I'm not here to try to impress you with words. I'm going to impress you with the food."

While his goal is to make the SideBar friendly and comfortable - like an extension of one's own living room - "That's a sandwich that you're not going make at home," DiBernardo said. "I'm not going to have a ham and Swiss on the menu. You can get that anywhere." 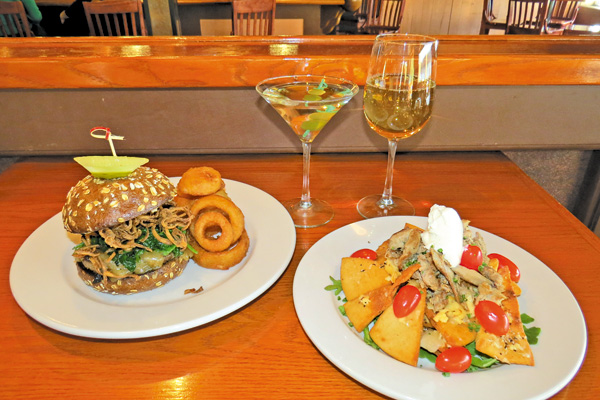 Ghost burger and duck nachos - only at Water Street Landing.

Lewiston business consultant Stacey Sheehan is working with DiBernardo to plan the anniversary party. She said the SideBar is far from average.

"The changes to The SideBar are great!" she said. "It's the perfect place for the grown-ups to kick back and relax.

"As always on Water Street, you've got the best view there is facing the Niagara River.

"I love this menu; it's creative, tasty, and really has something for everyone. Big drink selection, too. It's the kind of place that is perfect for a romantic date night, cocktails and appetizers with the girls, or burgers and beers with the guys.

"How would I describe The SideBar now? Well, it's not the sports bar, not the college watering hole, not the club scene, but upbeat and casual in a kind of cozy, ski lodge-sort of way. I love it!"

DiBernardo said, "Every time you come in here there's going to be some changes here, because we're going to constantly be evolving. We won't be evolving as much as we have in the first 10 years, but over the next couple of years we always want to give a new twist on what we're doing."

Those interested in attending Thursday's anniversary celebration should stop into Water Street Landing ahead of time to make arrangements, or call 716-754-9200 to request a complimentary VIP packet. 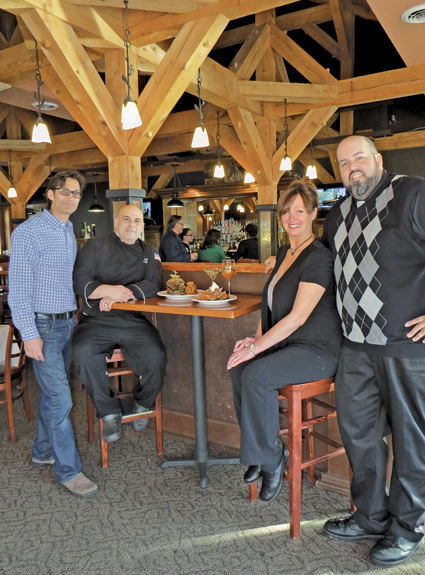