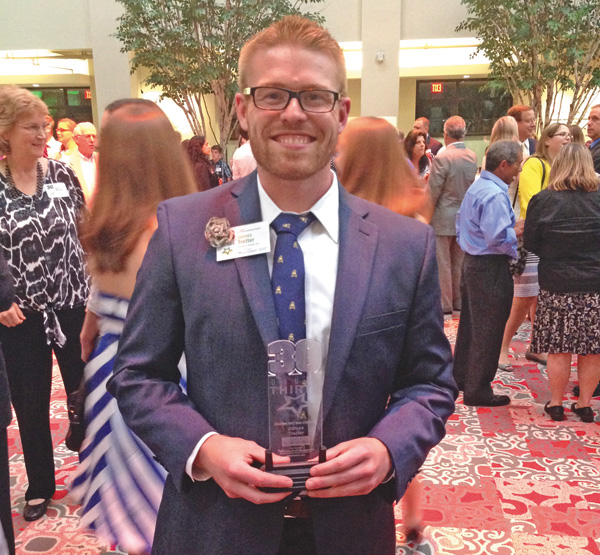 Sanborn native James Tretter has gone far since he graduated from Niagara-Wheatfield High School in 2004, even though he is still in Western New York.

Tretter, at 27, is chief compliance officer for Venture Forthe Inc., one of the largest home health care providers focusing on traumatic brain injury in the state with offices in Buffalo, Niagara Falls, Olean, Rochester, Canandaigua, Jamestown and Dunkirk, and more than 800 employees.

He recently was selected by Buffalo Business First as one its "30 Under 30."

"Western New York has a lot of really impressive individuals under 30 years old. That I was selected was really nice to hear," Tretter said.

A bonus part of the award for him was hearing from so many old friends who texted and called with congratulations, he said.

At Venture Forthe, Tretter developed the compliance department in response to new health care regulations. He also oversees the company's nursing and IT departments.

In its nomination of Tretter for "30 Under 30," Venture Forthe wrote: "Rising to the level of chief compliance officer of a company the size of Venture Forthe is no small feat for anyone, but he has done so before he even turned 30; and is doing so well that other agencies throughout the state have contacted him for consultation regarding compliance and billing procedures and regulations. ... He cannot go anywhere without running into 10 different people he knows from various walks of life and people jokingly refer to him as the 'mayor,' but it is a testament to how much he cares about people and his city."

Tretter, now an Erie County resident, has fond memories of his time at Niagara-Wheatfield, where he was an Honor Society student, president of his class and a member of the Student Council, and involved in sports (track and soccer).

"I like to stay involved," he said, a trait he continues to this day.

A former Division I collegiate wrestler, Tretter believes athletics and accessibility to athletics is very important for children, so he volunteers to coach youth wrestlers, and, as a wrestling official, dedicates time to officiate tournaments and local matches during the season. He has been running in Buffalo's annual Turkey Trot since 1999. He ran the Toronto Marathon last year and has run multiple 10Ks in Buffalo.

He helps Venture Forthe become further involved in the community by helping organize teams for charity walks and participating in diversity programs and parades. Since his father is a combat veteran, Tretter also volunteers with the VFW.

"I credit a lot of my success to the teachers and administrators, the coaches and everyone at Niagara-Wheatfield," Tretter said, advising current students, "You might not realize what you've learned from them till further down the line."