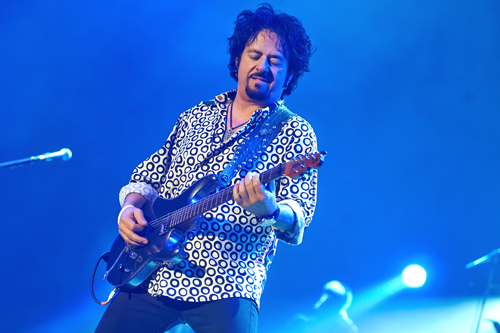 Artpark fans got a taste of Steve "Luke" Lukather's style of music when he performed June 24 with Ringo Starr & His All Starr Band. The singer returns with his own band, Toto, to close out the 2014 "Tuesdays in the Park" concert series Aug. 26.

"We're just having a blast," Luke said in a recent phone interview. "I'm looking across the stage at guys I've known 42 years - since we were little kids in school. The four of us: Me and Paich, Steve Porcaro and Joseph Williams have known each other since we were young kids. And we still act like little kids! That's the joy of being a musician: You never really have to grow up."

In April, Toto released "35th Anniversary Tour - Live In Poland" on CD, DVD and Blu-ray. To the band's surprise, the product was an instant success in the U.S. and across the globe.

"We're totally blown away, man," Luke said. "We did this thing. We're really popular overseas in Japan and all over Europe, but the U.S. and the U.K. has always been a little bit of an Achilles heel. We do OK, but on a smaller scale.

"All of a sudden, this thing's just blowing up out of nowhere. We entered the charts at No. 1 or No. 2. You know, it's crazy. Every country in the world - the best reviews we've ever gotten.

"There was no hype to it. ... We were just like, 'Is this some kind of April Fool's joke?' ... Because it was all so organically done. We just did this thing and put it out."

One thing Luke stresses - and one of the reasons he's called upon to perform with the music industry's best acts - is authenticity. He and his bandmates sing their own songs, play their own instruments, and leave the theatrics and robotics to others.

Of the anniversary album, Luke said, "We didn't fix it. It's really well produced, but it's the real thing. There's no auto-tuning and fixing - in fact, I make a big point of leaving the warts in to prove the point."

The band was made up of well-trained studio musicians who, ultimately, just wanted to play music. Toto's reluctance to conform to one particular style - or to a particular fashion - made the group the target of some rock critics.

"We really got this real big head start (performing with other acts in studio)," Luke said. "When our first album came out, so did the Sex Pistols. We were the antithesis of that. With the name Toto - which I always hated, but now I've just learned to go, 'It is what it is, man.' It's been good to me. ... (But) they picked us as a band to put against a punk rock band. That's like having chocolate-covered anchovies. They just don't mix.

"Like, why would you put us against that? It makes no sense. It's like playing basketball with a 3-year-old. We're completely different animals.

"We took a bunch of (trash) for that. And the thing is, we developed a thick skin and a great sense of humor about it. And we survived. No matter how much they tried to kill us, and beat us up, and tell everybody how much we suck, we just kept getting up after every punch and saying, 'Thank you. May we have another?'

"Between death, drug abuse, losing people to crazy (things), and members changing, the key guys that I grew up with are standing on the stage with me again. And I think that we're playing and singing better than ever."

Luke acknowledged it's unusual for him to perform twice at the same venue in the same summer, but said he's looking forward to the second Artpark show. He said longtime Toto fans will be pleased with the performance, and new fans will be surprised with what they hear.

"We're very aware that the casual fan wants to hear the hits," he said. "Some of them forget the songs we did were hits, because they didn't realize it was us. I've sung a lot of the hits. David Paich sung 'Africa.' Joseph Williams has (sung hits).

"People come to the show and they go, 'I forgot they did that song.' We get that all the time, because we played different kinds of styles. We're not just a band that has one particular thing.

"Now early on, that was used against us. Now I see that as a plus, being able to jump ships stylistically."

Toto is co-headlining with the soulful Michael McDonald.

"Michael goes way back (with us)," Luke said. "I remember in high school hearing about Michael. And Michael was in Steely Dan with Jeff (Porcaro) in like 1973, 1974. At one point, Michael was asked to be in Toto, before the original guy. He had just joined the Doobie Brothers and done 'Takin' It to the Streets.' "

"We're really close friends," Luke said. "I played on Michael's first solo album; I played on 'I Keep Forgettin' and a bunch of hits with him. He sang on some of our records."

•Check out our interview with Michael McDonald.

Toto is headed to Lewiston. (photo by Darek Kawka)