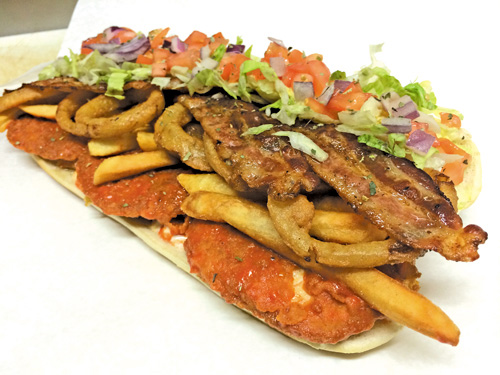 The "Purple Eagle" is one of many unique sandwiches at Favorite's Pizzeria.

Favorite for a reason

I don't have to tell you Favorite's Pizzeria is, well, Lewiston's favorite.

The steady line of customers standing in front of the restaurant counter daily is proof Favorite's has mastered pizza, wings and fingers.

But something you might not know is Favorite's has an unmatched variety of subs and hoagies. Patrons could eat one different sub or hoagie every single week for an entire year and not exhaust the exhaustive list.

"I don't think even Submasters has that many," he said, laughing.

These sandwiches, mind you, aren't just sloppily thrown together for the sake of bragging rights.

For starters, Brigham said each one is made with fine ingredients served on Costanzo's bread.

Moreover, he and his staff are meticulously detailed. They once looked at 20 different types of chicken fingers before settling on the brand now sitting inside your roll.

Like, say, the "Purple Eagle," which was created for Niagara University students.

"When we did the 'Purple Eagle,' we needed something, like, serious, because we had these rugby teams coming in and ordering," Brigham said. "It actually has its own following now.

The "Purple Eagle" is a tantalizing pairing of chicken fingers with mozzarella sticks, onion rings, French fries and crisp bacon.

"I had a guy tell me the other day, 'The "Purple Eagle" will change your life,' " Brigham said.

"We give them everything that they like on a sub," he explained. "We put mozzarella sticks, chicken fingers, onion rings, French fries, bacon - basically throw it all on a roll. They love it.

"It is really good."

People will "come in day after day for the "Purple Eagle." It's, like, 'Holy smokes!' " Brigham said.

Then there's the "Lake Road," which is a nod to Favorite's deliveryman Justin, who's been with the business since 2000, and lives on Lake Road. It has Italian sausage, capicola, grilled onions, banana peppers and mozzarella cheese.

Brigham's favorite subs are the "C.B. Triple" - which he named after himself, and combines steak, sausage and capicola with onions, sweet peppers and mushrooms - and a new take on burgers, called the "Pittsburgher."

With the "Pittsburgher," "we're using nothing but fresh ground beef (instead of frozen patties)," Brigham said. That's not something every sub place would do, but "I've got to give them fresh meat. You've got to do it right, you know, on a flat top. Get the caramelization. We julienne the potatoes fresh; cook it; throw (on) the onions. You know what I mean?

"How could you go wrong with some fresh Riviera sauce over the top? It's definitely one of my favorites. If you're a cheeseburger lover, 'The Pittsburgher' is the way to go."

The popular "Lancer" is a tag-teaming of steak and bacon; the "Cordon Bleu" combines fried chicken with grilled ham and Swiss; the "Julius Caesar" offers a marinated grilled chicken tossed with Caesar dressing. It, too, was named after a Favorite's employee. ...

We'd run out of ink before running down all of Favorite's subs.

"Everybody's got their regular hoagie," he said. "We try to go something beyond - over the top."

When it comes to a secret ingredient for success, Brigham said it's customer service. Sometimes that means having extra employees working to ensure guests are tended to in a timely manner. Other times it's leaving a sub on the menu when it's not selling as well as some others.

"They'll be someone out there that really likes that (one)," Brigham said. "You might not sell them, but that guy loves that. You know what I mean? There's fans of each one - like 'Jimmy the Greek.' It's like, sure, it's not for everybody, but there is somebody that asks for it. So we keep it on there.

"We try to give as much variety as we possibly can, and just go out of our way to try to go the extra mile for the customers."

That, more than the award-winning pizza and multitude of sandwiches, is what makes Favorite's stand out.

"You could open a place. Use the same ingredients. Do the same, exact thing that we're doing. What's going to make us different? Customer service," Brigham said. "That's our No. 1."

He credits his staff for making the dining experience positive. He said employees are polite, professional ... and have amazing mental aptitude.

"You've got to have that different kind of memory to be able to (serve) efficiently - especially when the pizzeria is getting slammed," Brigham said. "You could literally get two slips and have nine different subs. ... You really have to be well-trained to do that."

Facebookers said this attention to detail is appreciated.

Restaurateur Ken Scibetta said, "They use quality, fresh ingredients in their pizza, subs, etc., and they put thought and love into every dish/pie. The staff cares and it shows!"

Mary Furlong said, "I love that the door is always open. I know it's because there's no air conditioning, but it seems so welcoming. I like the variety, too."

Dana Kristen said, "Besides the fact that their pizza is delicious, they are always friendly. Good customer service goes a long way, and it's hard to come by. Their old-fashioned reminds me of pizza when I was a kid."

"That's what makes us different," Brigham said. "We going to try to always go out of our way to please the customers, and give them extra variety to choose from. That's what it's all about."

Favorite's Pizzeria is located at 781 Cayuga St., in the Village of Lewiston. Call 716-754-8880 or visit online at www.favoritespizza.com.