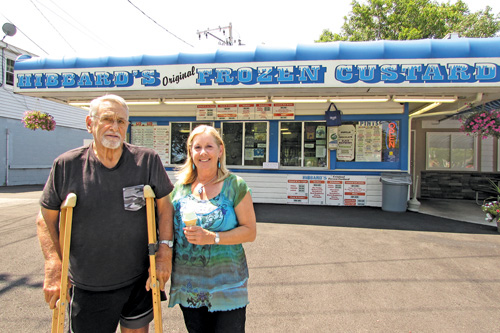 From the clothes we wear, to the music we listen to, our means of transportation and our preferred forms of entertainment, many things have changed since 1939.

You know one thing that hasn't changed in 75 years? People still confuse ice cream and custard.

"Most younger people have never heard of frozen custard," Jim Hibbard said. "They equate it with ice cream, and it's different than ice cream."

That was true when Jim's father, Harold, opened Hibbard's Original Frozen Custard in 1939, and it's true today, as the Hibbard family celebrates 75 years in the Village of Lewiston.

"It's smoother than ice cream," Jim said of custard. "It doesn't have all the air in it that ice cream does. When you see all this ice cream that is advertised, and it's a real cheap price, it's because it's full of air. I mean, some ice creams are 80 percent full of air."

Custard, he pointed out, is denser and made with butter fat and egg solids. At his popular dessert stand on Center Street and Portage Road, the secret mix "goes in our machines; it goes in one end and right out the front. It doesn't get all whipped up with air in between."

This unique way of making a frozen treat - not ice cream - was given to Harold Hibbard on a vacation in the 1930s.

"He had a friend in Florida that had a place, another location, and they vacationed there in the winter," Jim said. "The friend gave him the formula for (what is now Hibbard's custard), and he came back and started this place right here in Lewiston.

In the business' early days, "We used to get our mix shipped in from Rochester, before they had refrigeration in rail cars," Jim said. "They used to just put 10-gallon cans on, and put an insulated sleeve over it. We used to have to pick 'em up two or three times a week with a pickup truck."

Jim still looks fondly on those 10-gallon cans, which were the source of his first paychecks. He received five cents for each cleaned can.

While Jim was enthralled with his salary, customers were impressed with Hibbard's - what do they call this? - "frozen custard."

"There was a lot of places that had ice cream. Nobody had frozen custard."

Remarkably, that's mostly true of sweet shops today, too. This is one of the reasons Hibbard's Original Frozen Custard is so popular. On any given day - weekends, especially - you'll find long lines of customers waiting outside the Lewiston stand's serving windows.

"We have people that come every day - every single day - during the summer," said Jim's daughter, Kris Trunzo.

"We're one of the few places that still hand-dip," Jim said. "That's why a lot of the younger people don't have any idea until they try it."

"Once they try it, they're hooked," Trunzo said.

She said business, land and plaza owners from other parts of Western New York have sought to partner with her family members to bring custard to the masses.

"People have approached (us) ... looking for places," Trunzo said. With the flagship marking 75 years in operation, "It's a good anchor for whatever they're trying to do."

Trunzo's brother, James Hibbard Jr., recently brought the family custard to the scoop shop outside Clancy's in the Town of Niagara (formerly Page's Whistle Pig). He's in the process of opening a Hibbard's branch at Wright's Corners.

Their brothers, Marshall and Michael Hibbard, opened a shop on Transit Road in Lockport and serve M. Hibbard Premium Ice Cream. The organic dessert is sold at Mississippi Mudds in Tonawanda, too.

"It's been a good business," Jim said. He took the reins after graduating college in 1954, and said he's pleased Hibbard's has made people happy for so many years.

On Monday, Village of Lewiston Mayor Terry Collesano presented Trunzo with a plaque.

"I want to thank all of you in the room, because I'm sure everyone here has had a Hibbard's custard," Trunzo said. "Thank you all for your patronage. We appreciate it."

On Thursday, Niagara River Region Chamber of Commerce President Jennifer Pauly said, "Seventy-five years is such a great achievement for a business to attain. We are so proud to have Hibbard's in our community. Many visitors come to this region and know before they even step foot in Lewiston that they must have a custard from Hibbard's. We never get tired of giving people directions to the Portage Road stand!"

Trunzo said the family recipe for success is "everybody is easy to work with."

"Probably 90 percent of our employees, it's their first job ever," she said. "And we have people coming back in their 40s and 50s and 60s saying, 'We used to work here. You were my first job. It was great. I had never worked before.'

"They learn their work ethic. They learned their people skills and everything with their first job at Hibbard's Custard. It makes you feel good to know that you've started somebody on their way to their future."

When Hibbard's Original Frozen Custard opened, "We started out with, basically, chocolate (and) vanilla," Jim said. "We started out with just one machine. We ended up, in a year or so, getting another three machines. We started making black raspberry. Now, we have six different flavors of custard every day."

His favorite? "That's hard to say," Jim said. "I suppose the most, because you can use it in other things, is vanilla. But I like some of the newer flavors. I like Creamsicle; you know, it tastes like the old Creamsicle. We have some real different flavors."

To celebrate Hibbard's 75th anniversary, "We're going to have a contest where people have ideas for a type of custard," Jim said. "We pick a winner, and then we'll name it after them."

Customers are encouraged to place their recipes in the suggestion box outside the custard stand. Jim will select a new flavor based on creativity, practicality, and, of course, taste. The winning custard will be sold for the remainder of this season and all of next season. 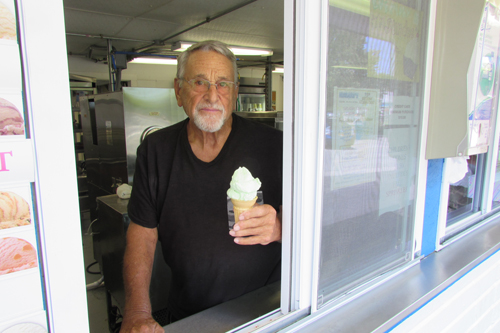 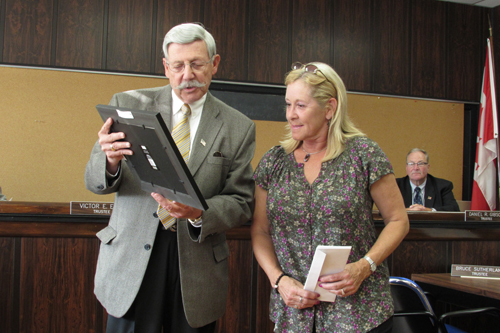