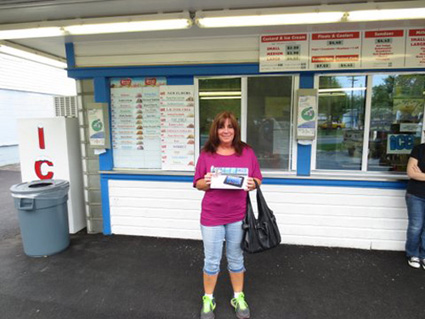 As part of its 75th anniversary celebration last weekend, Hibbard's Original Frozen Custard invited patrons to enter a contest and come up with a new custard flavor.

Ann Orton of Lockport thought up the winning recipe: "coconut obsession," which combines coconut custard with almonds and chocolate chips.

Orton received a $25 gift certificate for her entry. This new custard flavor will be named after Ann. Hibbard's will start serving it next week.

Hibbard's staffers received a number of votes for "s'mores custard," and plan to add this flavor to the roster within the next two weeks, as well.

Anniversary prize winners - all Lewiston residents - included Kelly Easterly, who took home a tablet; Paul Fitzpatrick, who won a television; and Owen Patrick, who received a bicycle with his custard.