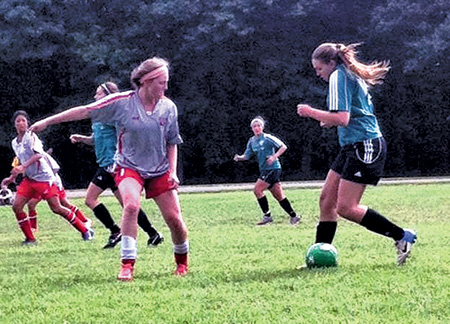 The World Cup is heating up near its end, but for young athletes in Niagara County, the real soccer excitement is only just beginning.

"We are Niagara County's largest youth sporting event; we're gonna have a couple thousand kids around the fort," said Tournament Director Jeff Gee, who also coaches for the league and sits on its board of directors. "We think it's a big deal, and we want the teams to think so, too."

Gee said when it first began, it was one of the only tournaments around. League member Gary Rose said it began as a fundraising event so that area children could play soccer. Money raised from the tournament goes toward covering the costs of equipment, travel and other expenses for the league's home and travel teams. Money also will be set aside to grant five players $1,000 college scholarships.

Though the tournament itself uses all of its funds to support the league, Gee and Rose said it has an economic impact outside of the games.

Rose said more than 600 hotel rooms have been booked in Niagara Falls for the event, and nearly 10,000 people are scheduled to attend. With tours, boat rides and other tourist attractions, he guessed the event might inject up to $1 million into the local economy.

The tournament is for boys and girls between the ages of 9 and 19. There are 180 teams registered to play, made up of more than 2,850 athletes in total. There will be trophies and awards for winners from each age group, and special trophies for all players age 10 or younger.

This year, the tournament is bringing in players not only from Western New York, but also from Ontario, Ohio and Michigan. A soccer coach from Philadelphia who grew up playing in the league here also signed up his team.

Gee credited the location of the tournament as a big part of its success. He said having 20 fields in one place was rare for a park, and the shaded picnic areas were also nice for onlookers.

"It's a very nice spot to have this. We can't thank the New York State Parks Department enough," he said.

Gee was optimistic about this year's tournament, as well as the future of the event.

"With World Cup fever going right now, we're getting some really nice interest," he said. "We hope the event will be even bigger next year!"

For more information on the tournament, visit www.niagarapioneer.com.