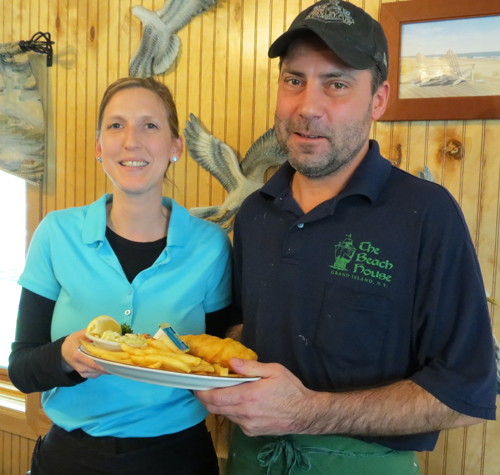 The popular restaurant took 11 percent of the vote. In total, 521 ballots were cast. Readers nominated 70 Western New York locations - primarily restaurants, but some churches, too.

"I appreciate people liking us, and voting for us," said The Beach House's owner, Mike Mongan. "It's a lot of hard work - not just by me. I'll say a tremendous amount of credit goes to the staff that I have here. I have people that have been with me for a very, very long time."

"Without them, the restaurant wouldn't be successful," he added.

As was the case in 2013, those voting for The Beach House weren't shy in singing the restaurant's praises. Some of the comments received included:

•"You can always count on consistently great fish frys week after week."

•"The fish tastes great and it is not watery. It is fresh and the batter is not overpowering or too thick. It is nice ... crunch on the outside and soft, flavorful fish inside."

•"It's full of flavor! Always cooked to perfection. My mouth is watering now!"

•"I have been going to (The) Beach House for 26 years. Excellent fish cooked by the owner."

"Our customers are very loyal," he added. "I'll say, typically every week, I believe over 95 percent of the people that walk through the door here are regular customers. We kind of get to know them. They know us. It makes it more enjoyable.

Of course, to win a fish fry contest two years in a row, a restaurant has to have the goods.

"We knock ourselves out to buy the highest-quality fish that we can buy," Mongan said.

"We have a couple companies we work very closely with, and they work closely with us," he noted. "They know that we're there 52 weeks a year for them - not just during the Lent season, like some place may be."

The Beach House is unique in that it serves a fish fry three days a week - Thursday through Saturday - each and every week.

"And I said to myself, 'Next year, we're going to be ready.' And so the next year, on Ash Wednesday, we were ready."

Mongan's plan worked - so well, in fact, that he decided to try it again.

"We did a good, good, healthy business on Ash Wednesday," he said. "And then a light bulb went off in my head, and I said, 'You know, I think we're going to do the fish fry the following Wednesday, too.' Surprisingly, that went quite good. We did better business than a normal Wednesday without the fish fry."

Buy why stop there, he thought.

"Then another evolution to the fish fry here came, I'm going to say about a dozen years ago," Mongan said. "We get so many requests for the fish fry. Sunday, Monday, you know. And we thought, you know, the fish that we serve on Wednesdays is delivered on Tuesdays. The fish that we serve on Friday gets delivered on Thursday. Every Thursday, we have everything here to provide the fish fry for the customers, so why don't we do that? So we thought, 'OK, we're going to include Thursday in the lineup, too, of fish fry days.'

"Sure enough, that's worked out great, also, and it gave Thursdays a big boost."

"The three-day-a-week thing has worked out really good," he added.

Mongan credits the late Rob Davis with making the Beach House a premier destination for fish.

Though The Beach House has a full menu (and NFP staffers swear by its bacon cheeseburger basket), Mongan said, "I eat the fish fry often.

"I do, yeah. I would say, average, I have about one fish fry every week. Sometimes it's late at night on a Friday, at, you know, 10:30, after we're closed up, and I got one piece that I saved for myself."

Mongan and a handful of other cooks prepare the fish.

"My manager's been with me for 20-25 years," Mongan said. "Us old-timers, we're teachers, and we teach the younger people the right way - what is acceptable."

Mongan began as a dishwasher at the Figurehead Supper Club on Grand Island.

"As so often happens in small restaurants, one day the cook doesn't show up, and the owner's in the kitchen saying, 'Hey kid, get over here and help me,' " he said. "Over a period of time, he taught me how to cook."

Mongan tried to convert The Beach House's beer-battered fish fry into a breaded fish fry, which is what he made at Figurehead.

"The customers, they just wouldn't have it," he said. "They wanted that beer-battered fish fry."

Over the years, Mongan has perfected the beer-battered fish fry. He said he's cooked hundreds of thousands of fish frys.

"I think I could probably be in the Guinness Book of Records today for most fish frys," Mongan said. "When I retire, I might sit down and calculate how many I've made, you know, in all my years. It's a lot."