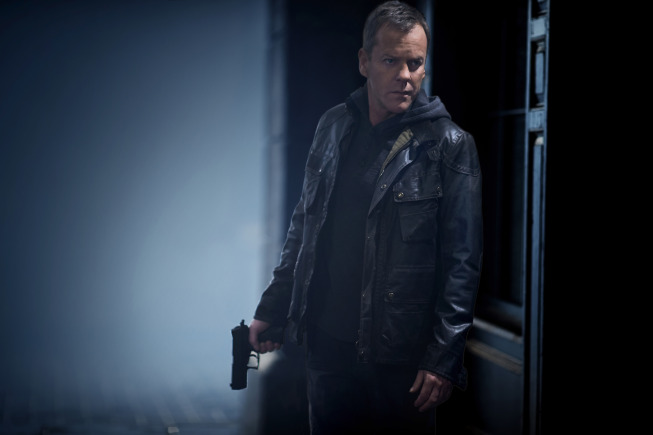 Jack is back: Kiefer Sutherland talks '24: Live Another Day'

When we last saw Jack Bauer, his country abandoned him. The government, the agencies he had protected so many times, sought his end. He was on the run, and going off the gird.

When Jack Bauer returns Monday, after four years in exile, he will once again risk his life to protect American lives.

"The opening threat is he has uncovered a plot to kill and assassinate the president of the United States on British soil. And the fear of doing that, even if it's an ally ... the fear of doing that on foreign soil could be tantamount to a world war," Kiefer Sutherland, star of "24: Live Another Day, said in a two-part phone interview this week. "He thinks that the ramifications, or the outcome of this event, if it were in fact to take place, would be global. He has a daughter and he has grandchildren who are alive, and those are some of the reasons that make him come out of hiding."

In trying to stop this epic disaster, Jack will encounter two people from his past: James Heller (William Devane), who is now president, and Audrey Raines, Jack's one-time love.

"He ... has a profound respect for President Heller, and obviously Audrey, his daughter, is kind of the great love of his life," Sutherland said. "And those things all become addressed in the first two, if not four episodes. But, again, he believes that the threat that he's uncovered is so egregious that it could start a world conflict, and that is his initial desire to become involved."

"24: Live Another Day" is a special 12-part event series that continues the adventure fans enjoyed for eight seasons with the original FOX series "24." Sutherland said the real-time format will continue, but in half the number of episodes. He said the abbreviated run is a more potent version of the original show.

"Ultimately, I'm trying to think of this season as concentrate," Sutherland said. "We've managed to take the 12 episodes and make them as concentrated and focused in the storytelling as anything we've ever done."

Though "24" kept viewers on the edge of their seats each and every week, without fail, Sutherland said the show's creative team would run into story issues around the midpoint of a season.

"We've always kind of run into an issue with the storytelling around episode 14 or 15, and trying to make that turn to the last eight," he said. "We've thought of the 12 episodes as a concentrated version of '24.' "

This, he noted, "gave great latitude for the writers."

For his work in creating and playing Jack Bauer, Sutherland took home an Emmy, a Golden Globe Award and two SAG Awards for Best Actor in a Drama Series. Jack Bauer is one of television's most iconic roles - and it's for that reason Sutherland was nervous about reprising the role.

"I think one of the things that I had to fight the most was that when you put something away - like we had '24' and the eight seasons of '24,' and we put it away and we were done with it and kind of benchmarked it. And this now has become a part of our life; it's not living anymore. You get very precious with it," he said.

Sutherland explained the most difficult thing for him in the six months prior to shooting was dealing with his nerves, "realizing we're opening this can up again." He was proud of the original series, and feared a second go-around wouldn't live up to expectations.

"I will be very honest with you, I was quite nervous leading up to it, and I was very fortunate to have Jon Cassar, our director, because I must have annoyed the life out of him. For the first three days I kept walking up to him going, 'Does that feel right to you? Does that look right to you? Does it sound right?' You know, all of this. And he was like, 'Kiefer, it's perfect. It's great.' I wouldn't have moved on otherwise. Clearly, I didn't believe him. So, he had to endure that for a few days."

Ultimately, Sutherland said, "It took me about 15 minutes with (Exec. Producer) Howard Gordon to agree to do it. He basically said he had a really great story he wanted to tell. There was no different approach. We're not trying to retell the story. It was just getting back into it."

"I think he's hugely relatable," he said. "Obviously, the circumstances are massively exaggerated, but I think all of us on some level feel a connection to a character like Jack Bauer, because this is a guy who's facing insurmountable odds, and yet he goes into the fight regardless. And I think life kind of makes us feel like that, too.

"Life is tricky. And I think the fact that he doesn't always win (helps). In the context of the first season, he managed to save the president; he managed to get his daughter back; but he lost his wife. A (normal) guy goes and gets a promotion at work, and he's very happy for a few minutes, but then realizes he doesn't have time to take his son to football practice anymore. And I think there's a kind of reality in that not winning that makes Jack Bauer incredibly relatable.

"And this is also a character that is ... after 9/11, I think there was a real feeling of helplessness. And I think Jack Bauer, as a character, was kind of dogmatic and, regardless of the circumstances, was going to push forward. And I certainly found that comforting, and I certainly felt very helpless after 9/11, and there was kind of a great refuge for me in that character."

It won't take long for "24: Live Another Day" to remind viewers why they root for Jack Bauer.

"I think there's a very strong moral compass with Jack Bauer," Sutherland said. "Whether he is right or wrong, he is going to do what he thinks is the right thing, and he's going to do everything - to the risk of his own life - that he's going to do that to try and prevent whatever situation the day brings from happening."