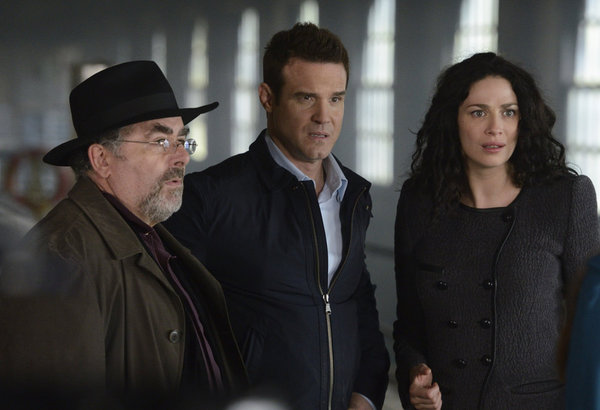 'Warehouse 13' goes out on top

Not every show gets to end on its own terms, nor does every cast get to bring closure to its characters. "Warehouse 13" was fortunate enough to conclude its five-year run in a manner its showrunner and stars said was gratifying for them, and will be satisfying to fans of the "thrilleromedy" (thriller-drama-comedy).

"This last summer - these last six (episodes), because we knew it was ending and we knew how we were going to do it, and we were - everybody was just so kind of into it and having a great time," showrunner Jack Kenny said. "I think that's why we keep referring to these last six, because they were the best time. Because most shows don't get the luxury of ending their series in the way that they want. A lot of shows are yanked, you know, prematurely and suddenly. So we got the great luxury and gift of being able to say, 'Hey, we're going out and this is how we're going.' "

He teased the Pete-Myka relationship may change. "There's an arc that Eddie (McClintock) and (Joanne Kelly) have in the last six episodes that's really fun to see unfold. And you see a lot of it unfold. I mean, you see the beginning of that - of the - sort of a cracking of that iceberg at the end of episode four. But then it really starts to come to fruition in five and six and - but everybody - every character has a - kind of a revelation, of sorts, in the last episode. Every character is granted a revelation in the defining moment and something really cool to deal with, and in, I think, a way that really works.

"So I think - I just - I hope that everybody's going to be very pleased with the final episode. I think they will be."

Kelly and McClintock put their characters in Kenny's hands. They trusted he and the "Warehouse 13" writers would take good care of Pete and Myka in the final episodes.

"I'm an actor; I'm not a writer. But we have great writers, and I trusted them to wrap it up in the best way that they knew how," Kelly said. "With a lot of actors, once they get involved in that process - and some people are different; some people are really good - but for me, I just trusted the writing staff. Let them do their thing. They've done for five years; let them do it a little bit longer."

"Yes, I mean, I would say the same thing. I trusted Jack and all the writers," McClintock said. "I always had the greatest amount of faith in them and I'd, you know, like Jack said, I'm just - I was the resident meat puppet. So just give me the words and I'll say them, but don't have me try and write them, because then it gets bad."

"But we did come up with a lot of cool stuff on this set sometimes," Kenny said. "You know, we always improved stuff, and (you guys) had a lot of input in that and we had a good time.

"So I wouldn't, you know, I wouldn't say that we just handed you the scripts and you - and forced you to say what was there. We - I thought you guys collaborated really beautifully with stuff like that."

Kenny said collaboration was especially important in dealing with the series' most serious moments.

"We did talk, I mean, for instance (about Myka's) cancer story. I sat down and talked to Joanne for a while about that. I said, 'How do you feel about this, and how would you want to explore it, and what are your feelings about going in this direction?'

"We did the same thing with Eddie when he was going to be, you know, when he was going to be in a relationship story with Paula Garces' character, and other - we always try to talk to the actors about the storylines that we're thinking about and get their input, because I think you get a way better performance and way better involvement from the actors if they - if they're involved in the stories.

"We like to write to everybody's strengths ... and what makes everybody happy."

"Yes. I mean, at the beginning of the series, I remember Jack had us all in and sat us down individually and said, 'OK, what do you think about this character? Who do you want this character to be?' And so we did have our input in that regard, and I think it made it a lot easier to play these characters and show up every day because, I mean, personally for me, there wasn't a whole lot of acting involved for me," McClintock said. "I mean, I just basically showed up to work in the morning and then acted a fool, just like me."

For the series' final episodes, Saul Rubinek, who plays Artie, said the cast and crew "didn't try to change the formula."

"There was, of course, the feeling that the show was going to have to wrap up and they do it in a rather typically 'Warehouse' poignant, hilarious, odd, peculiar and eccentric fashion," he added. "So, you know, you're going to get your trademark 'Warehouse' ending, but I think it will be as satisfying to fans as it was to the cast."

Aaron Ashmore (Steve) called his castmates "some of the most amazing performers and creative people that I've ever worked with." He said "Warehouse 13" is the kind of show that new fans can pick up and watch years from now thanks to "Netflix and all these other places and ways that shows can stay alive, whereas before, if - when they went off the air, they're kind of gone.

"I think the ('Warehouse 13') fanbase is a loyal, and the show is so full of, you know, adventure and history and all these things, that I think it is a show that's really rewatchable. So, hopefully, people will continue to rewatch it, and also new people will tune in on Netflix and keep it alive, because I think - yeah, I just think it has a place that it will stay alive in that way."

Watch the final "Warehouse 13" episodes Mondays at 9 p.m. on Syfy.