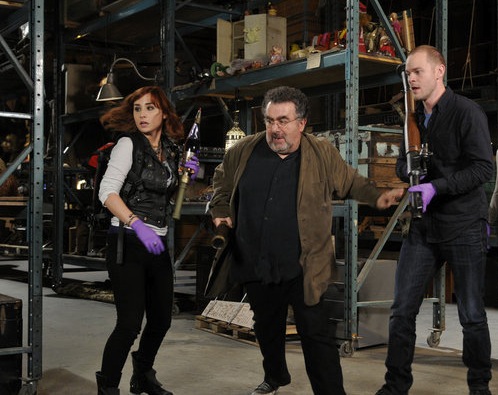 It was a ratings hit at a time when sci-fi shows are hit-and-miss with viewers. The show's writers wonderfully blended action, drama and comedy into storylines that were suitable for any audience type - families included. It even made will-they-or-won't-they moot. Pete and Myka - together, not together, friends, lovers, siblings - we didn't care, because their partnership worked so well.

To me, what made "Warehouse 13" stand out from so many other shows is that it never gave fans "throwaway" episodes. The show was fun to watch every week. It didn't take non-Sweeps months off, or string together months of episodes without any relevance to the overall storyline.

When meeting with the cast in Toronto halfway through season four - walking through the warehouse and checking out Artie's office - it was clear to me the cast wasn't interested in making a generic, serialized show.

"I mean, for me, when we get to the place where we're doing 'throwaway' episodes, I wouldn't care to really do it anymore," Eddie McClintock said. "I don't think (showrunner) Jack Kenny ... would want something like that to happen."

"I think every single one of us is dedicated to doing our very best every single take," Joanne Kelly said. "That's the great thing. ... Nobody doesn't care."

Aaron Ashmore said the "crazy stuff" was great - who wouldn't want to use historic trinkets to fight crime in an almost superhero capacity - but the character growth each season was even better.

"There's always new character stuff, even if it's just little beats," he said. "That keeps things kind of changing and the characters evolving a little bit in every episode. That's exciting."

Allison Scagliotti said, "Everyone you see up here ... we're up here in Toronto. We're doing this for such a large part of the year. This is our lives. Why make art if you don't love it? What's the point of showing up if you're going to just throw it away?

"If I'm going to commit my life to making something cool, then let's make it cool every second.

"I, especially, feel very fortunate that we enjoy such variety in every script."

"You can tell ... that we have a good time together," Saul Rubinek said.

He described Kenny as scanning through "18,000 different takes" looking to get every shot just right.

"This man is passionate about it," Rubinek said. "It's contagious."

"Warehouse 13" was that rare show that had its showrunner on set with the cast and crew for most episodes. This collaboration allowed everyone to participate, offer ideas and make adjustments.

"There's not a 'C' story we've ever done that they haven't always devoted every drop of their energy into," he added. "Nobody just shows up and walks through it. I have yet to see that. It's a dedicated group. And I think that's why we don't have 'throwaway' episodes."

What was evident in watching "Warehouse 13" - and many guest stars spoke to this point - was that the cast and crew really cared for one another.

And now, that family's members are moving on to other projects. Here's hoping they find an experience as rewarding as what they found in the "Warehouse."

The fifth and final season of "Warehouse 13" continues Mondays at 9 p.m. on Syfy.