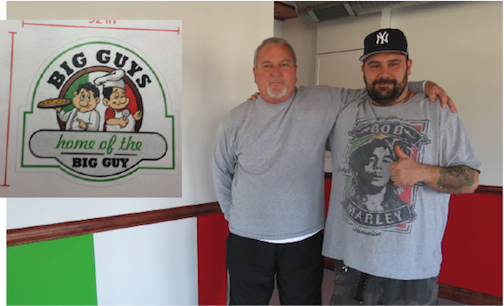 Tony Vescio and Michael Clark stand inside Big Guys Pizzeria and More. They are currently renovating the space and plan to open in May. Shown inset is an early look at the restaurant's logo.

Lewiston: Big Guys Pizzeria and More moving in next to Hibbard's

Speaking of his new restaurant, chef Michael Clark promises, "We're not going to be your everyday pizzeria."

Business partners Clark, of Niagara Falls, and Lewiston's Tony Vescio plan to open Big Guys Pizzeria and More early next month in the addition next to Hibbard's Original Frozen Custard on Portage Road. The eatery's name comes from its signature pie, a 28-inch pizza affectionately called "The Big Guy."

"If you ever saw a 28-inch pie, you just cannot believe how big they are," Vescio said. "They're huge."

The restaurant aims to offer something for vegans, too.

"We really know the importance of a vegan presence on our menu," Vescio said. "We are going to attempt a partial vegan menu."

"One thing we're not serving is ice cream," he said, laughing.

"You want to eat and get some good comfort food, come see us," Vescio added.

The inside of Big Guys Pizzeria will be bright and cheery - painted red, white and green to represent the Italian flag - with TVs, and seating for almost 50. Outside bistro tables will allow patrons to enjoy Lewiston's spring and summer months.

"I think customers are really going to like our décor," Vescio said.

"It's homey," Clark added. "You're not walking into a dull, dark restaurant."

Clark is a culinary school graduate with 20 years of cooking experience, including a recent stint with One Niagara in downtown Niagara Falls.

Big Guys won't have a bar, but it will attract late-night guests thanks to its expanded hours of operation.

"We will be open till 2 or 3 in the morning," Clark said. "That's something that nobody in Lewiston does."

For the past two years, Hibbard's served hot dogs, hamburgers and other grilled foods in the addition, which was built in 2011. The Hibbard family was looking for an outside tenant to run the ancillary eatery.