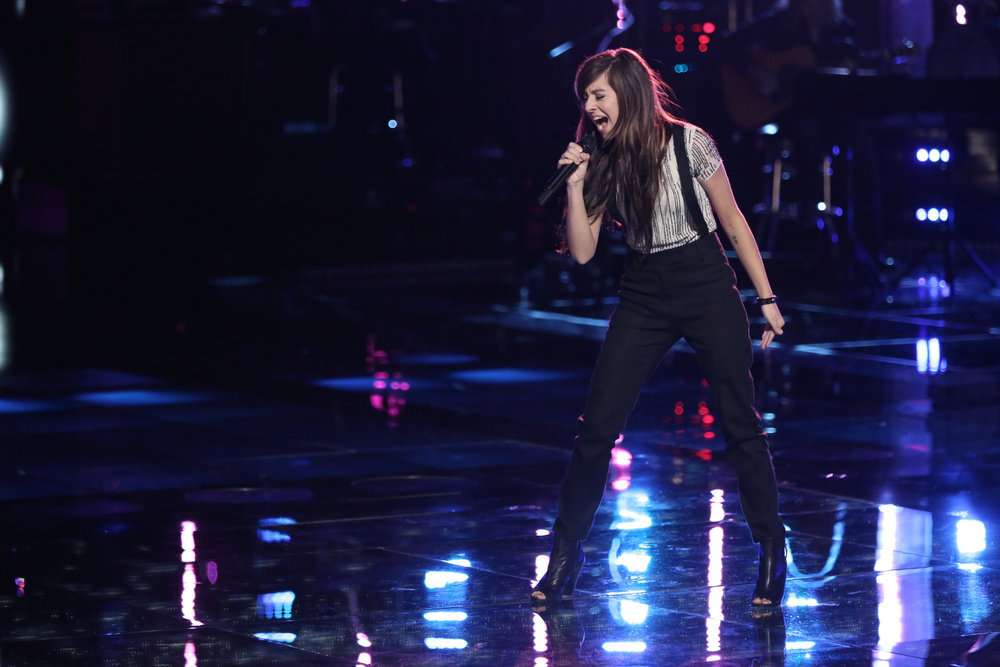 "The Voice": Christina Grimmie performs in the playoff round. (NBC photo by Tyler Golden)

"The Voice" coaches Blake Shelton, Usher and Shakira have a big problem on their hands.

When coach Adam Levine selected Christina Grimmie as one of his three "Team Adam" finalists, he made it very difficult for the other three teams to win this season. Christina is not only talented - all four coaches have called her a fiery vocal dynamo - but she has YouTube fans, too.

Christina is a serious contender - and that makes her a serious threat to the other coaches.

But that's not how she sees it.

Yes, she came into this competition with a large fanbase, which is something most singers don't have when auditioning. But Christina doesn't want to win based on past performances. She wants to be judged - and garner votes - based on her work on "The Voice."

"You know what, he didn't really touch on any of that (past success). And I actually respect him a lot for not even bringing the previous success into the picture," Christina said after her first "Battle Round" victory. "I'm very big on fair game. I think, I mean, me coming into this with, you know, fans already and stuff like that, I feel like it was just a little unfair for everyone else. And people may be looking at me ... a little bit differently. And I just really appreciate that Adam didn't even really, you know, bring that up."

Though Christina has had success online - and in the real world, too, gigging with Selena Gomez and Disney - she was just "one of the guys," so to speak, on "Team Adam."

"He was just kind of looking at me like - like he looked at everyone else. And I really appreciate that," Christina said. "And what he really did was just help me with what I already had. You know ... I'm known as the pop singer on the show - the pop R&B singer. And you know he just - I feel like he knows how I sing and how I want to sing. And he very much just wants to help build that. And I really respect the guy for it."

For Christina, "The Voice" represents an opportunity to build on the past, but not live in it, as she continues her career in music.

"I mean, I don't think I wanted to start fresh, per say. I - I feel like I'm on a whole new level now that I'm singing with so many amazing singers," she said. "You know, it just used to be ... me singing, you know, in my room, and putting up videos. And people were looking up to me. Now it's just kind of like I'm surrounded by all these amazing singers. And I really have to step up my game.

"So, in that sense, I guess I'm starting new and fresh as a performer. But I - I've always stuck to who I am. And I've always been a performer at heart. And I just want to build upon the artist that I've always been. And I think the key is just growing in what you've always been. I don't see a sense in changing my performance style unless, of course, Adam, you know, has a real note about it. But so far, so good."

"The Voice" continues Tuesday, Monday and Tuesday at 8 p.m. on NBC.