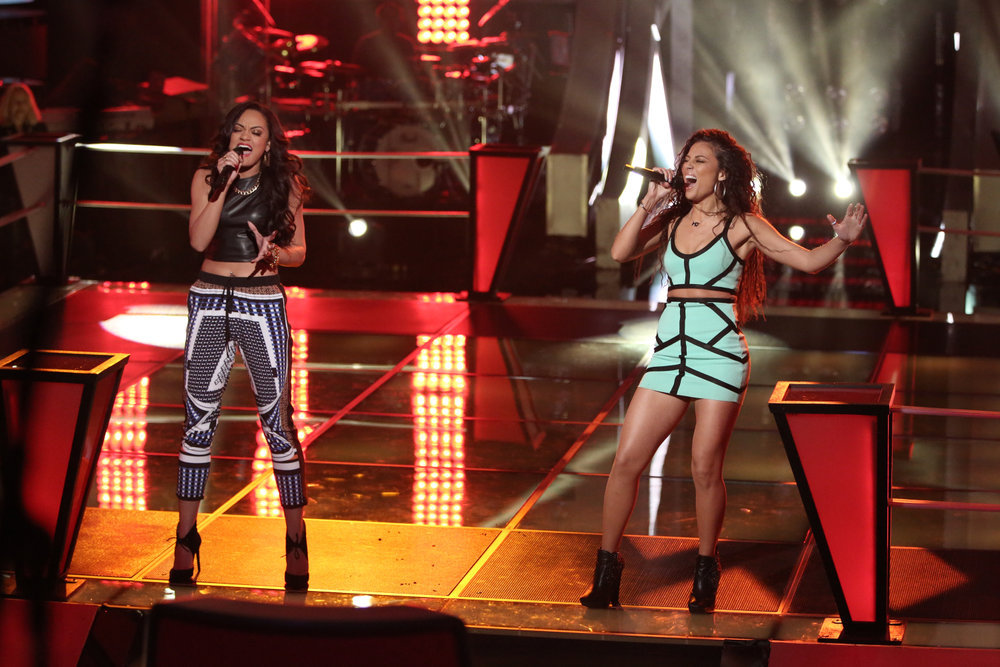 'The Voice': Week one of 'Battle Rounds' goes to Kat, Sisaundra, Melissa, Clarissa and Brittnee

Singers have momentum heading into second "Battle Round"

After three weeks of blind auditions, and more than four-dozen performances, "The Voice" began whittling down the field of hopefuls in the first week of the "Battle Rounds." Artists squared off in a duet-duel, tag-teaming on a song of their coach's choice in an attempt to show who could sing it better.

When the music stopped, the lightshow dimmed and the dust settled, a handful of singers emerged as the mid-round frontrunners.

Sisaundra Lewis showed she's going to be very tough to beat in a head-to-head matchup. A vocalist who once gave instruction to Celine Dion, Sisaundra's pipes are powerful and precise.

In her first "Battle Round" appearance, Sisaundra was paired with Paula DeAnda on Lady Gaga's "Do What You Want" - a song Gaga performed on season five with coach Christina Aguilera. Sisaundra's performance proved she has what it takes to compete - and not just with the rest of this season's field, but with two of the industry's top talents.

One of Sisaundra's high notes, in fact, just about knocked the coaches from their chairs.

"Sisaundra, what an incredible talent," Usher said. "I would have to give it to Sisaundra."

"We are hearing a lot about the big note that you hit," Blake Shelton said. "One of my favorite things that I've heard along the way was that you picked that moment, and then you did it. And it is amazing."

"Sisaundra stands alone on Team Blake this year," he said afterward. "I mean, there's nobody that's anywhere near interfering with what she's capable of, and who she is as an artist."

The singer told BTS she's learned a lot from Blake. Sisaundra said winning her "Battle Round" gave her "that empowerment that you have, but at the same time we do have to live in a moment."

She brushed aside any notion she's a favorite to win.

"It's very intense. Everyone's really talented. And we just bring our best to the stage on that day," Sisaundra said.

Kat Perkins was teamed with Patrick Thomson on a number that actually is a male-female duet, the '70s-era Kenny Loggins/Stevie Nicks song "Whenever I Call You 'Friend.' "

Kat made the most of her time on stage, moving and singing with style. When joining in on the chorus, Kat's vocals soared past her partner.

"The 'Battle Round' is really fun for me, because I love singing harmonies and I love being a part of that aspect of a song or a performance," Kat told BTS. "And so that was really exciting for me to be a part of."

"Thank God mine and Patrick's song was a real duet by Kenny Loggins and Stevie Nicks," she added. "So it was just such a team effort for that song. And, you know, we needed both parts to really complete that performance. So all I did was try to focus on doing my part well and, you know, blending with Patrick and making it a great performance. And I felt like that was taken care of."

While the coaches enjoyed the duet, they said Kat was the stronger performer.

"For this type of song, Kat had more of a presence there. She was clearly hitting the note with more ease," coach Blake Shelton said.

"Kat, you were as animated as I've ever seen you," he said.

Adam said he thinks Kat could make her way into "The Voice's" final five.

"Kat has just an overall strength that I just can't let go of," he said. "I think she really commands the room very beautifully, and so I had to hold on to her."

"You know, I think just moving - for me, I have to it one step at a time - pretty much one day at a time in this competition, because it's so intense," Kat told BTS. "And there's so much talent. And, you know, for me I think it's just now focusing on the next round and getting through that.

"So yes, I feel momentum, but only in the fact that there's work to be done. And that next round is there and, you know, it's just focus time and go time."

Clarissa Serna, a four-chair-turn in the blinds, once again impressed the coaches with her vocal prowess. She was paired with fellow rocker Jeremy Briggs on a rock song, Foreigner's "Cold as Ice." Though Clarissa was nervous about her "Battle," she managed to take control on stage to take the victory.

"You guys are both great singers, but Clarissa, you got a big voice, man," Adam said. "I don't know. I'd probably have to go with Clarissa."

"That's a tall order for you, Jeremy," Blake said. "I mean, she's a powerhouse. I think I would probably pick Clarissa in that situation."

Shakira opted to take Clarissa, saying she "can do a lot more moving forward" with her female protégée.

Though she's been a coaches' favorite thus far, Clarissa said it would take more than that to win "The Voice."

"You know looking back - and I haven't watched every season of 'The Voice' previously, but in my opinion it doesn't really matter how many chairs you get from the beginning, as far as progressing through the show goes. I think that, yes, it can definitely take its toll on your nerves and create more pressure for you personally and internally, because you feel like you have so much to prove. It seems like it would be reassuring, because you feel like, 'Oh well, maybe if I don't get through this part I'll get stolen.' But it really comes down to the quality of your performance and, you know, how you are as an individual - not just your voice, but your personality and how you carry yourself, as well.

"And, you know, I just - it's a good thing. It's great. I definitely felt the pressure with that. I wanted to bring everything I had to the table, and I think that, yes, you kind of like get yourself up to a certain level and you feel like you have to top that. ... It does add a lot of pressure to the next round and the following rounds after that, because you feel like you always have to be taking another step higher."

Week one's standout "Battle" pitted Melissa Jiménez against Brittnee Camelle. It was an epic showdown - coach Usher's description - as two talented singers gave their all in a rendition of Melanie Fiona's "Give It to Me Right." The performance was reminiscent of the classic Monica-Brandy duet "The Boy Is Mine."

"I thought it was awesome," Shakira said of the performance. "It was just smoky hot."

"That was, like, a battle," Adam said. "The only thing you didn't do was punch each other in the face with boxing gloves.

"When you started singing, Brittnee, it was a little shaky at the very, very top. But then you got it together, and you were just unbelievable. And then at the end, Melissa, you hit this big note. It was like. ..."

"How about that range?" Shakira interjected.

"It's crazy how high that note was," Adam said.

"I think that you both managed to work it out, where you could individually shine," Usher said. "I want to comment, Melissa, on those bigger notes that you hit, because I think that that was great. With those big notes, I think that it's great, Brittnee, that you were able to show control, allowing this performance to really come to you.

"When you sang, it was powerful," Adam told Brittnee. "And I think that there's a lot that's going to happen with you."

"He's the mastermind behind who he wants to see sing together," she told BTS. "And I really respect, you know, even though I had a feeling that - I had a really good feeling I was going to go up against Brittnee, just because of our similar styles. I even included personality and just we're - us as women - I had a feeling we were going to be together.

"So when Usher said, 'I paired you two together,' and, you know, 'two strong powerhouses, and I feel that you can both inspire each other and also sort of pull from each other's energy,' he was right on the money. So I was, you know, really excited and, you know, you kind of get a little naturally scared, because you know what the other singer is bringing. And so at the end of the day, I'm really happy that he paired me with Brittnee."

"Yes. I definitely have to agree with Melissa on that," Brittnee said. "You know, we do have to thank Usher for that performance, because it was a great pairing. And I thoroughly enjoyed every part of it - from all the rehearsals to the actual performance - like, it was a challenge. And we had to meet each other.

"And we did feed off of each other's energy. And I think that's what made it so intense in that moment was the fact that every time we got up there and did it, there was something new that evolved or that came out of us. And that was such a joy.

"So I think it just was all about just energy, and just really feeling each other in the moment."

Look for more moments on "The Voice" when it continues Monday and Tuesday at 8 p.m. on NBC.