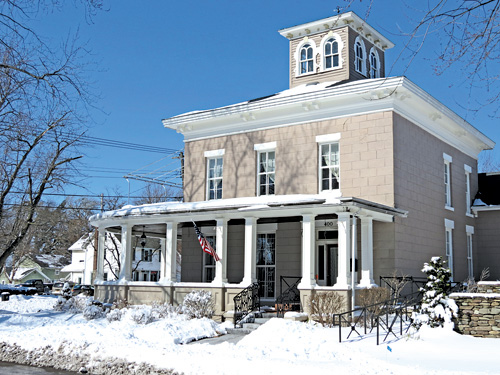 Village Board takes no action on café and market

Lewiston residents spoke in favor of the proposed Niagara Marketplace & Bistro at a public hearing Monday. The business would operate at 400 Plain St., at the corner of South Fourth Street, and serve vegan and vegetarian dishes.

"I'm incredibly inspired by having this type of venue in this area," Town of Lewiston resident Patty Hall told the Village Board of Trustees. "It's a great alternative to pizza. And there's a lot of vegans in this area that can't find a decent place to eat with good food products that you are sure of and confident about."

Last month, the Licata and Muto families submitted a proposal to the Village Board seeking to open Niagara Marketplace & Bistro in what is known as the "Kelly House."

Jim Olsen, who lives directly across the street from the historic building, said, "We've been here for 14 years. I guess I want to stand in support of this business in the community.

"It seems to me that this is a very special property that is probably not going to be occupied by a single family."

"From what I've heard about the business that's proposed, it sounds like a terrific thing," he added. "I'd like to come over and try the food."

Village resident Claudia Marasco purchased the Kelly House in order to share it with the public.

"I know that this idea is really novel," she said. "When you have people stop you on the street and say, 'What are you going to put in there?' And I go, 'Well,' and I try to explain it. They go, 'Good. I'm looking forward to it.' "

The café and market operators, she said, "are going to give us a chance to not only eat well, but they're going to teach us how to eat well. The little grocery component that goes with it, if you eat the food you can then purchase something to take home to try to make it yourself."

One of the largest crowds in recent years jammed into the Village of Lewiston boardroom Monday to voice opinions on the proposed health-conscious café and specialty market. More than 75 people were spread throughout the room. Most found seats, while some were forced to stand along the walls or peek in from the hallway.

Residents debated parking, and the impact a new business would have on the neighborhood.

The building has five spaces on site, which is five less than required. Last week, the village's Zoning Board of Appeals begrudgingly granted the project a parking variance, with the understanding the applicants will look into working out an agreement with the owners of nearby parking lots.

The Planning Board approved the project, too. Final approval now rests with the Village Board. The project applicants need a special use permit to operate their business in an R-2-, or two-family residential-zoned district.

South Fourth Street resident Skip Hauth and his wife, Pam, who is the village historian, wrote a letter to the ZBA suggesting Plain Street is not the ideal location for a café and market. On Monday, Skip told trustees, "We are ... opposed to it being in an historic residential neighborhood.

"Plain Street is too narrow to accommodate the parking on a daily basis. There have been businesses in this building before (most recently an apothecary). Those businesses have typically been those that attracted small numbers of patrons at a given time, and were almost universally closed at the early part of the evening. So, we did not see ourselves in a situation where we had ongoing business in that location as long as 11 o'clock, which is what's being proposed for the special use permit.

"We think that would be very disruptive during the evening hours. We also think it would significantly change the character of the neighborhood."

South Fourth Street resident Ross Eckert also wrote a letter to the ZBA opposing the variance. At Monday's meeting he told trustees, "I think you have to take into account all of the things you've imposed upon the residents of South Fourth Street, whether it be Monday night, with the blues (concerts); Tuesday, the concerts at Artpark; Wednesday (concerts at Artpark). I mean, we love the summer. ... (We put) a lot of effort into our yard. We like to sit out and enjoy the quiet and the beauty of our yard. And, frankly, you've already taken three of seven days away from us. Because it's not quiet, believe me."

He said, "the camel's back broke with that last straw," in reference to the proposal.

"It's very upsetting to me," he added. "I'm very much opposed to any further commercial development in front of my house. Period."

Ron Craft, who lives and works kitty-corner to 400 Plain St., said, "If you look at reality, that house is large. The taxes on it aren't cheap, and I'd hate to see it go into arrears."

"I think something like this would be an addition to the town," he added. "As far as parking, I want a village with (a parking problem). If you don't have a problem parking, you don't have anything going on."

Craft said the concept is ideal, and called Marasco an idyllic owner.

"I have a lot of respect for Claudia. She owns property, and I know what she does with her properties," he added.

Village resident Mamie Simonson said, "If the board decided to get over the parking issue, you should be very happy that Claudia bought this house, because it will be beautiful forever and she will take care of it."

"We can't worry about parking," she added. "Every place you go - if you go to Buffalo, you walk a block to go to your restaurant."

"If we're going to have a parking problem continue, which we do now, then it's got to be faced up by all you gentlemen, and you have to come to some decision - some conclusion," said ZBA member Peter MacLaren. "If you want businesses and people to come to the village, you've got to give them a place to park."

Edward Finkbeiner, also a ZBA member, and owner of the Barton Hill Hotel, said, "The existing uses that were there prior to this approved use required more parking than what their use requires."

"We should be so lucky as to have 30 days a year where we have a traffic concern," he added. "We're doing something right."

"I just want to say that an alternative to parking is to walk," Hall said. "That's what I did."

Dian Ruta, the real estate agent who sold the Kelly House, said she received little interest in the house from potential homebuyers. "The reason it wasn't selling as residential is because there was no yard for children to play. It was too big."

She supports the café proposal.

"Sometimes I go to the village and I want healthy. And I love the restaurants here, but I question, 'What can I get (that's healthy)?' "

Doris Noblin of North Fifth Street said, "I'm very disappointed that a business that could be so much fun, so novel, so creative - in that gorgeous house - would have any negative feeling (from) anyone.

"If no one buys it to live in it ... we've got other examples of places on Center Street that are owned (and) nothing's happening in them. They're falling apart."

"We all know that Claudia is an incredible owner of property," she added.

Prior to the public hearing, Village of Lewiston Mayor Terry Collesano said, "I'd like to inform the people that are here ... that there will not be any action taken this evening. There are many questions that this board still has, and we'd like to indulge in it a little more."

After the meeting, Trustee Vic Eydt said the board will review what types of businesses are permitted in an R-2 district, the parking variance, as well as the property's driveway, which partially belongs to the village.

"Let's do our due diligence and make sure we're doing it right," Eydt said.

The board may take action at its April 7 work session, or wait until the April 21 general meeting.