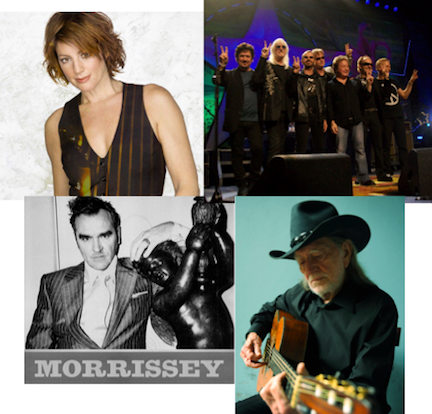 Performers at Artpark this summer include, clockwise from left, Sarah McLachlan, Ringo Starr & His All Star Band, Willie Nelson and Morrissey.

Something unexpected happened 10 years ago at Artpark.

On a hot Tuesday evening in early August - to the surprise of everyone in Lewiston - more than 10,000 people filed into Artpark's outdoor amphitheater to listen to David Clayton-Thomas and Blood, Sweat & Tears.

Though not officially so, this was, for all intents and purposes, the birth of the "Tuesday in the Park" concert series.

"We thought we tipped the Richter scale with David Clayton-Thomas and Blood, Sweat & Tears when we had an amazing 12,000 people show up to a free concert," said Maureen Kellick, Artpark & Company's director of marketing and public relations. "After that, the Art-El went out, and the space became filled with more and more people."

From that point on, Artpark & Company realized if you build it, they will come.

In the years that followed, President George Osborne and his staff built a reputation for booking top-tier acts such as Sheryl Crow, Huey Lewis, Lynyrd Skynyrd, Gladys Knight, Billy Idol, Chicago and ZZ Top. They secured monies to reconfigure and enhance the outdoor concert grounds, and they put together a solid financial base thanks, in part, to landing more sponsors than they can seat on any given concert night.

Last summer, Artpark & Company hosted a summer-long grand celebration to mark its 40th anniversary season. The venue presented 161 events and welcomed more than 200,000 people to Lewiston's state park. Clearly, this would be a high point for the venue - one that couldn't be equaled.

Or so we thought.

One week before Christmas, it was revealed Lindsey Stirling was booked for June 12 inside the Mainstage Theater. The former "America's Got Talent" star has sold 200,000 albums - without a label - at a time when it's hard to sell 20,000 albums.

At the end of January, news broke unofficially that Artpark & Company had booked one of the Beatles - drummer Ringo Starr. One of the world's most recognizable musicians - one quarter of the most famous band of all time - and he's headed to the Village of Lewiston (population: less than 3,000) June 24.

Ringo is bringing his All Starr Band with him - that includes Steve Lukather (Toto), Richard Page (Mr. Mister) and Todd Rundgren.

And the hits kept coming.

Less than one week later, Arctic Monkeys joined the party. The English indie band was announced as the "Artpark Wednesdays" act for June 18.

Country music legend Willie Nelson also is booked, and will perform a double-bill with Alison Krauss + Union Station on June 7.

Across Facebook, Artpark patrons are frantically searching for an emoticon to represent a jaw dropping to the floor.

When insurance agent Joel Holka shared the Sentinel's Ringo Starr link on Facebook, the responses he received ranged from "wow" to "awesome."

Jamie Symmonds, owner of the village's Angel to Apple Clothing & Shoe Boutique - and a big Sarah McLachlan fan - said, "I think it's amazing.

"Last year, I traveled to Rochester to actually see Sarah McLachlan in concert."

"She's got a huge following, and the fact that it's going to be in my backyard, I think, is just unbelievable," Symmonds added. "I truly think Artpark is just doing an amazing job bringing acts to Lewiston."

If these are just the Mainstage Theater shows, what will "Tuesday in the Park" look like?

Fans are salivating at the prospects.

"We've tried every year to get at least as good or better acts," Osborne said.

While success has come often, it hasn't come easy.

"It's a battle," he said. "We've tried to establish Artpark as the venue with the affordable admission - the low-cost, low-admission tickets, that have the highest quality of acts.

"In order to do that, we have to pay bigger fees. And we're in competition with another level of venue. We lost an act to the Rochester Jazz Festival. ... We lost three acts to the casino. We're even being blacked-out by the Molson Amphitheatre on occasion. There's an act - they don't want them to be able to play at Artpark because they can see the same band here for ... a lot less than they can see it in Toronto."

Despite the competition, Artpark has booked one star musician right after another.

"Our goal is to get the best acts we can," Osborne said. "We still haven't gotten everything booked yet (for 2014). We've been fortunate this year. We've got some good shows coming into the theater."

The first "Tuesday in the Park" acts will be revealed March 19. In recent years, Artpark's signature concert series has fueled all other park events.

"TIP" began as a free concert series. That worked OK until the crowd size became unmanageable. Following the 2011 season - and back-to-back weeks with record crowds (an estimated 20,000-plus for both Lynyrd Skynyrd and ZZ Top) - Artpark elected to make the concert series a smaller, ticketed event. Prices have ranged from $5 to $15, with "front of stage" priority tickets available for a higher fee. The goal was to cap audiences at around 10,000-11,000.

Osborne said patrons are "content" with the ticket price.

"I think everything's better now that we've started to control the size of the audience," he said. "There have been occasions, I think, where it seemed overcrowded. And that's usually an event where we have a much older audience, and they're more sedate, and we get more chairs brought in."

"It was worse" before, he said. "We can keep the walkways open now."

Most Tuesday nights, only the amphitheater bowl walkway gets jammed up.

"It's much better; it's safer," Osborne said. "The lines aren't as long at the restrooms or the bars, and we get the additional revenue from the ticket sales. It offsets the fact that we don't have quite as large a crowd.

"I think, for at least the first two years, it's been very successful. We're hoping that it will continue at least this season."

A vast number of backers have afforded Artpark & Company the ability to land superstar musicians. As of now, about 35 sponsors are on board for the 2014 season.

"That's one thing that Artpark has that none of these other venues that have done the free or low-cost outdoor concerts have: They've never been able to get the kind of sponsorship base that we have here," Osborne said.

"We actually have companies that are dying to get in there," he said. "We don't have anymore room for them." (Top sponsors receive sponsor boxes, which are limited in quantity.)

"One of the reasons why we keep trying to keep the talent level as high as it is, is because we need to keep the sponsors happy," Osborne said. "They want to be here because we have big-name acts."

"I think that's been the key to our success," he added.

Kellick, who is tasked with landing sponsors, said Artpark has attracted "huge interest from regional corporations, private businesses and individuals who want to be linked with a brand like Artpark. It's been a destination for 40 years."

"For them to be able to bring their clients and guests out to these incredible concerts, with these beautiful sunsets - and no rain - is a big perk for them, too," Kellick said.

"I just think we sometimes look at each other like, 'Oh, wow.' It's like Mount Everest. 'How are we going to do this?' And it happens. And it happens faithfully, and happily, and we have more and more fans in love with Artpark every year."

"The Arctic Monkeys was a big get for us," he said.

The plan, Osborne revealed, is to fill the amphitheater - just as it's filled each Tuesday.

"Our goal is to get all bands to that level," he said. Osborne added, "This is a true test case this year. We've doubled the budget for Wednesdays. The quality of acts across the board will be better than it's ever been on Wednesday night. Let's see what the response is."

In general, Artpark & Company wants to attract a younger audience than what it's had in previous seasons.

"We feel - the board of directors of Artpark & Company, and myself and other key players - is we have to do some shows for younger people," Osborne said.

In an effort to appeal to more 20- and 30-something music lovers, "This year, we're bringing in a couple of things that are a little different," he said. "We've tried to move more into the '80s and maybe even into the '90s."

The 12-week "Tuesday in the Park" concert series is slated to begin June 10. Tickets for three of those shows will go on sale March 28.

"We're working hard," Kellick said. "We can't wait for all the snow to melt, because under the snow there's green grass - and it's waiting for people in their flip-flops to come sit on it and have another great summer. So let's start the countdown!"