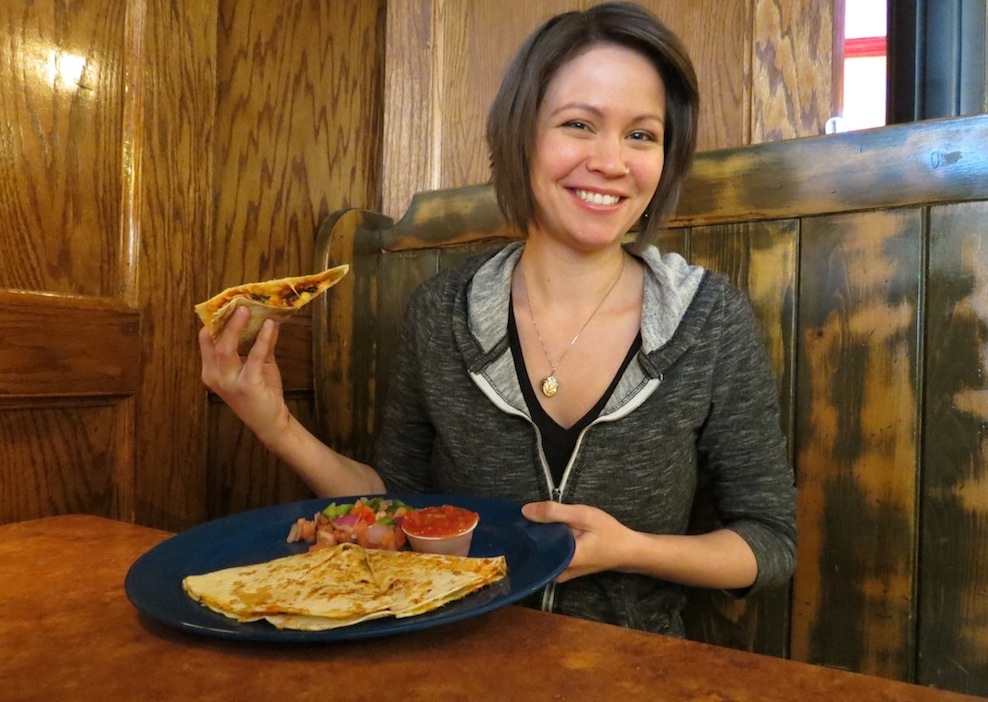 Jenn Mayberry holds up a freshly made quesadilla.

It's cliché to say a restaurant has "something for everyone."

Unless that restaurant is Brio Pizzeria & Restaurant.

Since opening, the Lewiston eatery has boasted one of the village's largest menus. We're talking 20 types of pizza, French fries made six different ways, a dozen different salads, eight categories of sandwiches, tacos, wraps and even full Italian dinners.

"Nobody's doing it in Lewiston anymore since they closed down, and it is a huge hit," said Brio manager Danielle Velky.

Two quarters will net any flavor of jumbo wing, bone-in or boneless, made with genuine Frank's products.

"We tried it out. I put it out there last week with only five days notice. ... I started it this past Monday and we got a full restaurant," Velky said. "It went pretty well."

From 6-10 p.m., customers will enjoy free samples of vegan pizza, nachos, quesadillas, cupcakes and cookies. In the process, guests can enter to win prizes.

Brickyard floor manager Jenn Mayberry, who has lived a vegan lifestyle since graduating high school, inspired the vegan additions. She said it's difficult to find restaurants that serve vegan dishes - and even harder to find something more than salads and veggie burgers.

"I talked to Ken about adding vegan items to the menu," Mayberry said. She added, "I'm vegan. I have a lot of vegan friends. There's just nowhere else for us to eat unless we want to drive all the way to Buffalo or all the way to Snyder to get something. We just thought that it would be great for people to have an option in Lewiston."

"We all need to eat healthy," Bryan said.

"It's just something healthier," Mayberry said. "Pizza is so easy to make because it's already - with all the vegetables and everything on it, you really barely even need cheese on it. But when you add that stuff, it's just so good."

One of the key ingredients is daiya, a plant-based, dairy-free, soy-free, gluten-free cheese alternative.

"I made him a pizza when we first started talking about it, and everybody couldn't believe that it was vegan - which is pretty good," Mayberry said.

The Brickyard is sponsoring this vegan menu preview event, with desserts courtesy of Kimcakes (a vegan bakery) and the Orange Cat Coffee Co. (which serves vegan dishes for breakfast and lunch).

"I'm a little overwhelmed with the reaction that I got," Mayberry said. Fliers she distributed at the Orange Cat were quickly consumed.

She noted, "Anything that we can think of that Brio offers ... we can 'veganize.' " That includes hummus, loaded fries, pasta sauces and chili.

Fifty-cent chicken wings and vegan plates are just the beginning. Velky said patrons can look forward to more changes this year at Brio.

"It'll definitely be a place where you're going to want to come this summer and check it out," she said. "So everyone is just going to have to stay tuned."

Brio Pizzeria & Restaurant is located at 440 Center St., in the Village of Lewiston.